The morning number coding is coming back by August 15, 2022, this means that between 7:00 AM to 10:00 AM and 5:00 PM to 8:00 PM, Mondays to Fridays except for holidays, motorists whose ending numbers on their plates will get flagged down if they are caught on major thoroughfares by the Metro Manila Development Authority (MMDA).

Related: The number coding scheme is back starting August 15, 2022

However, the MMDA will be lenient in the first few days of the implementation, and the authority will issue warnings in place of tickets only until August 17, 2022. By August 18, the MMDA will issue tickets to number coding violators.

On August 18, 2022, the MMDA stated that they will be apprehending motorists on the ground and through the No Contact Apprehension Program (NCAP). 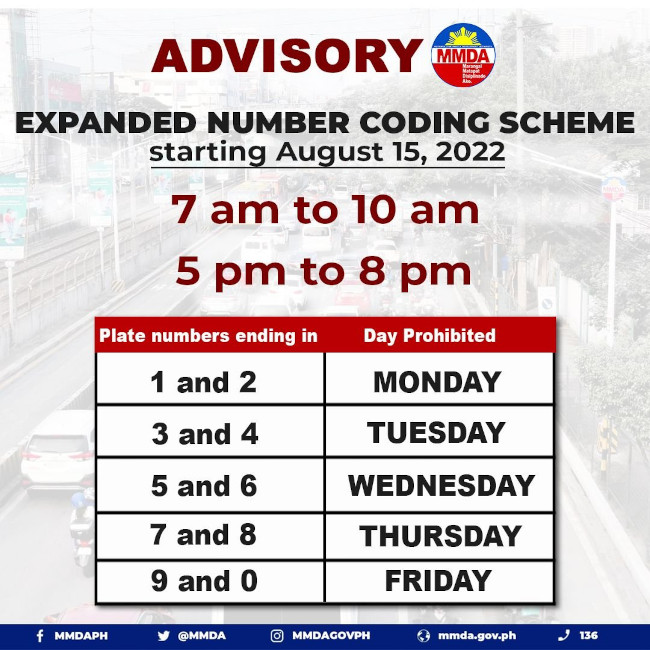 The number coding scheme is still the same general rule for most vehicles, with ending plate numbers 1 and 2 banned on Mondays, 3 and 4 on Tuesdays, 5 and 6 on Wednesdays, 7 and 8 on Thursdays, and 9 and 0 on Fridays. However, there is a window for these cars to be used given the designated coding hours. All vehicles can travel on major thoroughfares between the hours of 10:01 AM and 4.59 PM.

The Unified Vehicular Volume Reduction Program (UVVRP) is coming back in full force, after getting a soft reimplementation in November of 2021. Motorists whose plates are coded for the day used to be able to travel in the morning but were barred from traveling at night. Now that several schools are reinstating face-to-face classes, the UVVRP makes sense to transition back into banning certain vehicles in the morning and in the evening. The decision was made by the Metro Manila Council (MMC) which is composed of all the Metro Manila mayors, which approved the MMDA Resolution No. 22-14 Series of 2022 amid the resumption of face-to-face classes which starts on August 22, 2022.

The volume of expected vehicular traffic is expected to be higher than pre-pandemic levels. On August 4, 2022, the MMDA Traffic Engineering Center estimated that about 387,000 vehicles traversed EDSA. The center is also estimating that the volume will go up to 435,000 by the time face-to-face classes resume.