The LS is Lexus’ flagship model and the very reason why the Japanese luxury marque was created back in 1989. After a decade since its predecessor was launched, the 5th generation model made its debut at the 2017 North American International Auto Show (NAIAS).

So, what can you expect from a flagship model that’s 10 years in the making? First off, the 2018 Lexus LS was built on the same rear-wheel drive platform as its coupe version, the LC 500 (just stretch the wheelbase a little further). Aside from having a low stance and superb driving performance, the LS is equipped with a new chassis control technology called Vehicle Dynamics Integrated Management (VDIM), which controls braking, steering, powertrain, and suspension for the whole car.

Speaking of performance, the 2018 LS is powered by an all-new twin-turbo 3.5L V6 engine. It was developed through Toyota's F1 technology – that explains its output rating of 415 hp and 599 Nm – a huge 33-hp and 106-Nm jump from the ratings of the outgoing model. 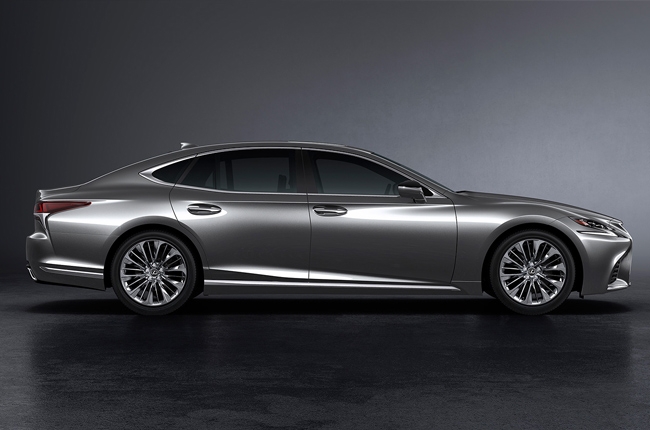 Up front, the all-new LS took hints of the sharp, bold styling of its coupe version. The signature L-shaped daytime running lights and hourglass mesh grille are there, aligning it with the rest of the Lexus’ lineup.

Moreover, it has a coupe-like silhouette, just like what was predicted in its teaser image last month. However, the space hasn't been compromised with the all-new model. In fact, it’s longer and wider than its parents, awarding it with a bigger interior space. It’s like having the best of both worlds – an athletic vehicle that can seat 5 people comfortably. The interior of the all-new LS is undoubtedly luxurious, but the best place to be when inside the car is at the 2nd row. Why? Aside from the reclining rear seats, it offers Shiatsu massage and a foldable ottoman. Talk about luxury in comfort.

Inside the cabin, the dashboard is embellished with wood accents, which is a beautiful contrast against the light-colored leather seats. Add the 12.3-inch navigation display and you’ll have the combination of traditional Japanese and modern styling in front of you – classy and visually appealing.

In addition, since the all-new model is lower, it has air suspension that activates upon unlocking the car. It automatically raises the vehicle and opens the seat bolster for easy entry. As the flagship sedan, the all-new LS is equipped with Lexus Safety System +, which features the world’s first pedestrian detection with active steering. When a collision is imminent, the car will not only brake by itself; it will also steer around the person while staying in the lane. An alert will also be sent to the driver through the color head up display (HUD).

As of this writing, Lexus hasn't disclosed as to when the all-new flagship model hit the U.S. showrooms.