Toyota Motor Philippines (TMP) launched the all-new Hiace Super Grandia, which means that the Hiace lineup is complete and it’s time to say goodbye to the old boxy Hiace. But what's the difference between the Super Grandia and the rest of the lineup? What does the word ‘Super’ mean for Toyota’s people-hauler? 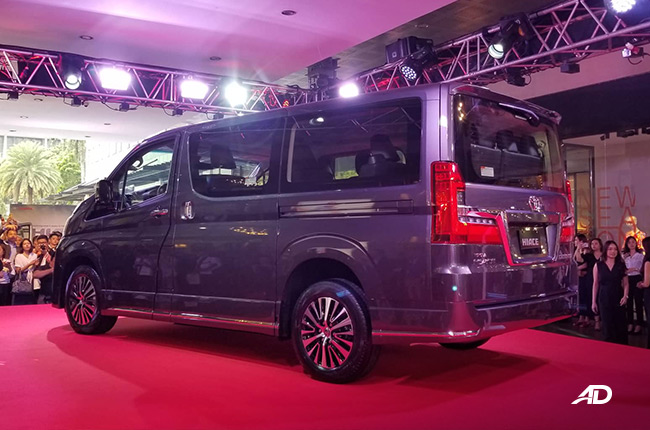 The Super Grandia gets all the goodies as it is the highest variant available for the Hiace model. It features Toyota’s Safety Sense that gives it features such as Lane Departure Warning and a pre-collision system.  These features are what give the Super Grandia an edge in safety over its normal Hiace stablemates.

Aside from the added safety toys, the Hiace Super Grandia also gets four captains seats for its second and third rows. This adds another element of luxury to the already top-spec vehicle. As a top-trim Hiace, the Super Grandia features automatic dual sliding doors, which make easier passenger ingress and egress.

Related: 2020 Toyota Hiace Super Grandia - Everything you need to know
Related: Local Toyota cars to be even safer with Safety Sense

On the outside, the front fascia of the vehicles are noticeable different. For starters the light housing designs are different between the two. The normal Hiace comes with Halogens lights, this means that there are reflectors positioned within the lighthousing. On the other hand, the Super Grandia has LED projectors which means there is no need for the reflectors of the normal Hiace variants. The grille of both vehicles are also different. The Super Grandia features a grill that extends partially into where the headlights are. The design shows off 4 bars one big one and 3 smaller ones. The big grille is also similar to that of what you see on Lexus vehicles. Lexus is Toyota’s more up-market luxury brand. This shows that Toyota designed the grill to go for the more upmarket segment. The Super Grandia also has a different lower bumper design as the fog lights are alone on the lower grille. For the normal Hiace, the grille now has relatively big bars upfront. It doesn't have the big gaping mouth of the Super Grandia but instead chooses for a more subtle look. While the Super Grandia has chrome accents all across the front bumper the normal Hiace does not choose to go for a more blacked-out or body-colored grille, such is the case for the two-tone variants.

The Super Grandia gets the better lighting system with LEDs. These are paired to the Automatic High Beam system that dims the lights when it detects an oncoming vehicle or when it gets too close to a vehicle within the same lane. Airbags are aplenty in the Super Grandia as it features 9 airbags spread all around to maximize the safety of the passengers.

The Super Grandia also has two automatic sliding doors, which makes ingress and egress of the vehicle much easier for its passengers as they board or exit from either side. The normal Hiace on the other hand only has one door, which is thankfully located on the front passenger side. This is also known as the safe side of the vehicle as it lets passengers enter and exit away from traffic. The location of this door will switch sides depending on the country the vehicle is made in. The normal Hiace lineup gets the same engine as the Super Grandia but with a different tune. This means that they may share the same displacement and designs but the engines have different performance figures from one another. The Super Grandia gets 174hp which is two horsepower down from its Commuter Deluxe and GL Grandia counterparts. However, what it lacks in horsepower it makes up for in torque. The Super Grandia matches the Grandia GL in torque as they both produce 450 Nm of torque. 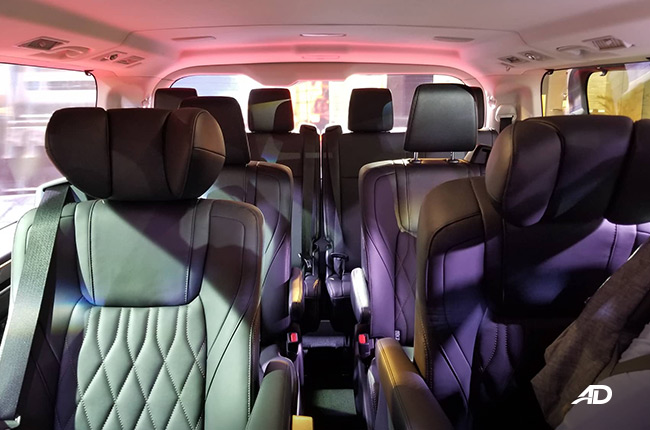 The normal Hiace shines in terms of seating capacity as it is able to seat more people but with the sacrifice of luxury. If a people carrying vehicle is what you need then the normal Hiace can easily answer it. What it lacks in luxury it more than makes up for in utility as the van can easily shuttle people around from place to place.