Lexus Philippines displayed their lineup during the 6th Philippine International Motor Show (PIMS), which includes the RX 350 F-Sport, NX 200t F-Sport, LX 570, ES 350, GS F, and the RC F. However, the main highlight is their flagship car, the LC 500 coupe.

The LC 500 is inspired by the LF-LC concept that was released back in 2012. Showcased at PIMS is its hybrid variant, the LC 500h. It boasts the world’s first Multi Stage Hybrid System. This is the combination of the components of traditional full hybrid powertrains, which includes a 3.5L V6 engine, an electric motor, and 2 transmission systems – a 2-motor CVT and a conventional 4-speed automatic gearbox.

The electric motor matches the driver’s input with the rev output for a better acceleration. This combination is said to deliver high performance. With this, the combined power output is rated at 354 hp and 472 Nm of torque.

Lexus also said that the vehicle embodies the brand’s shift of engineering processes and design philosophy. In fact, it garnered a lot of praises when it was first revealed at the 2016 North American International Auto Show due to its visual charisma. 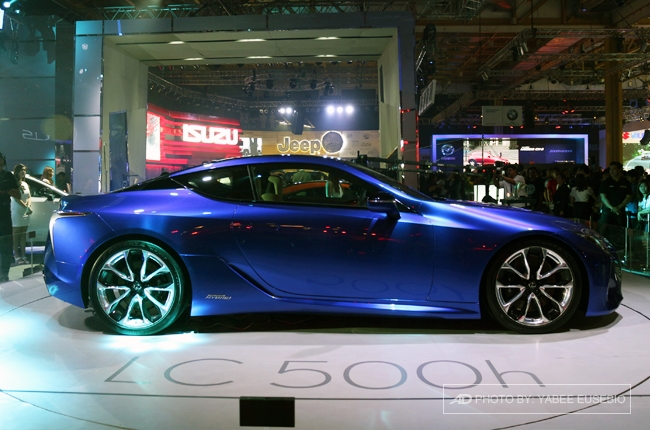 These praises were further solidified when we laid eyes on the hybrid sports coupe – and we couldn’t agree more. Its sharp, squinty LED headlights go perfectly with the signature hourglass Lexus mesh grille. The daytime running lights that outlines the front air vents are a thing of beauty, while the bulging fender flairs make the car’s stance look wider for that track ready demeanor. At the rear, the L-shaped LED tail lights create a 3D impression when on.

Moreover, the LC 500’s body is full of functional aerodynamic measures that enhances driving pleasure on and off the track. This includes muscular bulging fender flare that gives this coupe a wide, stable stance. Lastly, a rear diffuser and an active spoiler boost the airflow during high performance drive. The interior of the LC 500 is just as sophisticated and luscious as its exterior design. It’s covered with hand stitched leather on the dashboard and seats, as well as Alcantara door trims that looks like a visual representation of flowing air.

For more information about Lexus and its vehicles, visit the AutoDeal Car Brands page.