Nürburgring is a notorious race track located in Germany. We seriously say 'notorious' as there are over 70 casualties recorded to have happened there. It is looked up to as the world's most unforgiving track by the planet's greatest professional drivers, enthusiasts, and engineers. It even earned the nickname "Green Hell," which is pretty much the most accurate way to define it.

Despite the negative connotations, it still holds the most adrenaline in the automotive world. Car manufacturers test their cars here, a subtle way of slapping on rivals' faces as to who's better than who. Out there, it’s a war, and speed has a whole different meaning. So, Porsche decided to take all these in by itself – and it seems like Green Hell found its new demon. Porsche is still the title-holder for the fastest lap recorded on the Nürburgring-Nordschleife track. This was after Timo Bernhard, an official driver of the German automaker, managed to lapped the 21-kilometer Nürburgring-Nordschleife in just 5:19.550 in a 919 Hybrid Evo. This is 51.58 seconds ahead of the previous 6:11.130 record which Stefan Bellof charted driving the 620-hp Rothmans Porsche 956 C.

Related: Have a glimpse at Porsche’s secretive design drawings

Legendary Bellof's lap time and crown has been left unchallenged for over 35 years now, until Bernhard decided to end it. Bernhard drove around Nürburgring-Nordschleife at a whopping average speed of 233.8 km/h. What do you expect, this guy is a five-time overall winner of the Nürburgring 24-hours, two-time outright winner of the Le Mans 24-hours, and reigning World Endurance Champion with the Porsche 919 Hybrid.

“This is a great moment for me and for the entire team – the 919 program’s icing on the cake. The Evo was perfectly prepared and I have done my best on this lap. Thanks to the aerodynamic downforce, at sections I never imagined you can stay on full throttle. I’m pretty familiar with the Nordschleife. But today I got to learn it in a new way.”
Timo Bernhard
Official Porsche driver

Meanwhile, on his follow up statement, he paid his respects to the late Stefan Bellof, saying that he still remains as a giant for him. He even raced using a Bellof-inspired black-red-gold-designed helmet on the 30th anniversary of Stefan's fatal accident, which led to his death. We bet old man Bellof is proud of you, Timo. 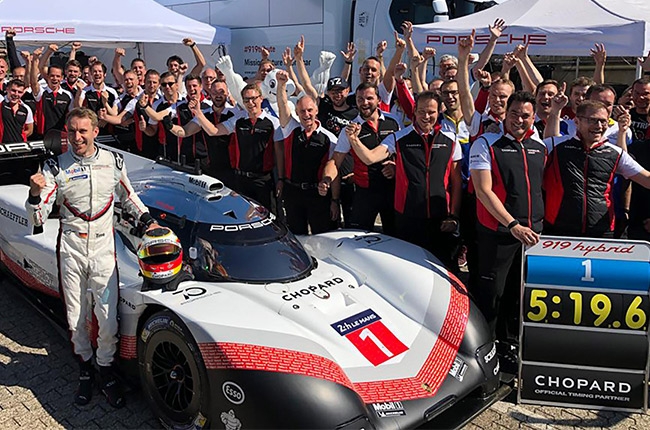 On the other side of the story, the fact that the title-holder on the Nürburgring is a hybrid sounds weird. The 919 Hybrid Evo was even reported faster than the McLaren F1 W07 Hybrid. On your knees McLaren Formula One, welcome to the new era of racing.