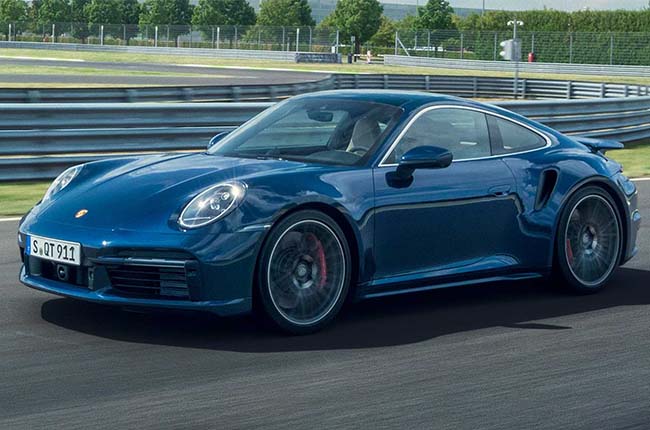 The updated 2021 Porsche 911 coupe and cabriolet have officially made their debut in the United States. These new models will now fill in the gap that has been left behind by the 992-generation of the Carrera S and the Turbo S. While orders for these vehicles are already available in the US actual deliveries for these units will begin early next year.

The new Turbo variant of the 911 brings with it to the table a 3.8-liter, a twin-turbo flat-six motor that makes 572hp and 750 Nm of torque. This lets the German sports car hit 0-100km/h in less than 2.7 seconds for its coupe version and 2.8 seconds for its convertible version. Both of these versions of the vehicle can hit a top speed of 319km/h. While the new 911 Turbo has less power than the Turbo S version, it does have an identical drivetrain. It still sends all of its 572hp through an 8-speed dual-clutch transmission that sends the power to all four wheels via an all-wheel-drive system. Rear-axle steering is also found on the 911 Turbo S has also made its way into the new version of the vehicle which gives it better handling characteristics.

On the inside, the new German performance car comes with a 10.9-inch infotainment system and 14-way power-adjustable sport seats. The German performance brand is also offering you some of the elements from the S through its new lightweight package and sport package. What Porsche does is it takes off 30 kilograms of weight off from your vehicle which results in the removal of the rear seats and sound insulation granting you a better power to weight ratio than stock. The Sport package, on the other hand, gives your 911 a unique style by adding SportDesign body pieces, different trims, as well as clear taillights.

The new version of the German sports car also brings with it the brand’s Dynamic Chassis Control, a lowered suspension, and a sport exhaust is also available as an additional option. Customers can also choose to outfit their vehicles with an upgrade to the safety assist system with InnoDrive that comes with adaptive cruise control, lane keep assist, surround view, and night vision assist.

Get Notified About Porsche 911 Carrera News