The new model brings a wide range of improvements over the previous-gen Land Cruiser 200 series, which launched way back in 2007. These much-anticipated updates include a new platform, suspension, and engine options. Riding on the new GA-F platform, the Toyota Land Cruiser 300 promises a refined driving experience and improved environmental performance. While the 300 series retains the same ladder frame structure, the GA-F platform has allowed for a whopping 200 kg weight reduction. This gives the new Land Cruiser a lower center of gravity and better weight distribution.

With the drop in weight, the 300 series responds better to every driving input. The Land Cruiser's lightweight frame has also been made 20% more rigid than the previous generation, offering improved collision performance and ride quality.

While its platform is different, the new Land Cruiser's total length and wheelbase length remains the same as the outgoing 200 series. The approach angle and departure angle are also unchanged.

Together with its new platform, the Land Cruiser 300 features a newly developed suspension system. The front features a high-mount double-wishbone setup, while the rear has a trailing-link rigid axle suspension. Of course, this wouldn't be a Land Cruiser without superior off-road capabilities, and Toyota hasn't skimped in that department. The new 300 series features a hydraulic power steering system with an electric steering actuator. This new system delivers a more responsive steering feel while helping with maneuverability at low speeds and reducing kickback while driving off-road.

The new Land Cruiser also comes equipped with a limited-slip differential (LSD) from Torsen, which provides better rear-wheel traction. Other off-road features include Multi-Terrain Select and Multi-Terrain Monitor. The former allows direct control for different road conditions, while the latter uses cameras positioned around the vehicle to provide insights into off-road situations in real-time. The all-new Toyota Land Cruiser also features a redesigned interior. Upon entry, the driver is greeted by a 12.3-inch high-resolution widescreen display. The new infotainment system can display navigation, audio, climate controls, and off-road data. Fingerprint authentication is also available for the first time in a Toyota vehicle. For this function, the Smart Key is needed together with a registered fingerprint. The Toyota Safety Sense package is also equipped with the 300 series as standard. 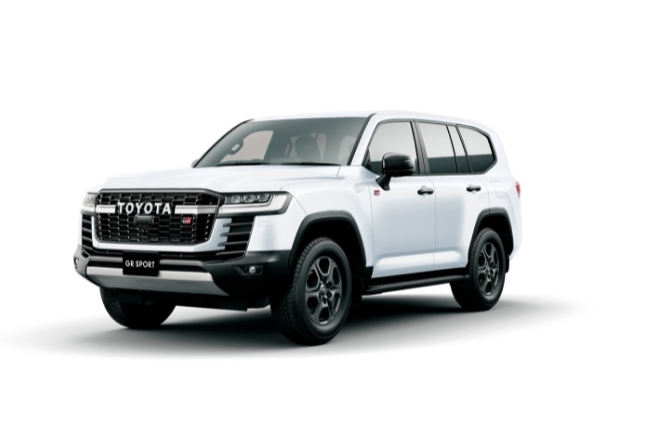 A GR Sport model is also available. The sportier model includes all the trappings of the GR Sport badge, with special accessories and badging all around the SUV. The Land Cruiser GR Sport also has exclusive features, like an Electronic-Kinetic Dynamic Suspension System (E-KDSS), which Toyota claims is the first in the world. Inside the cabin, the GR Sport model features a signature red and black leather interior. A GRS startup screen is also present for the infotainment system.