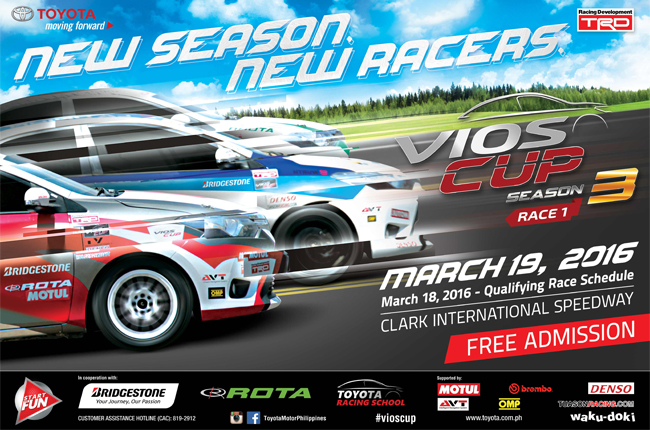 Toyota Motor Philippines (TMP) recently kicked off the 3rd season of the country’s only one make race, the Vios Cup. They revealed several updates to the event such as a bigger grid, a new driver class, and a few new local and international drivers.

The grid will be composed of an estimated 54 race car drivers aboard the Toyota Vios according to TMP, but they won’t go out all at the same time. They will be separated in different classes such as the new Super Sporting Class, Sporting Class, Promotional Class, and the Celebrity Class to even out the playing field.

Mainstays in the Celebrity Class like Joyce Pring, Jinno Rufino, Fabio Ide, and Derek Ramsey would be joined by newcomers Arci Munoz, Megan Young, and Jericho Rosales. Due to the driver growth and success from the previous season, Sam YG and Phoemela Baranda have been moved out of the to the Celebrity Class and into the Sporting Class.

You can catch the 3rd season of the Toyota Vios Cup free of admission at the following dates and locations.

The Toyota Vios cup is in partnership with Bridgestone and Rota, supported by Motul, TRD, Brembo, Denso, AVT, OMP, and Tuason Racing.