The refreshed 2021 Toyota Innova has officially launched in the Philippines. The popular 7-seater MPV originally made its debut in 2016 and has remained relatively unchanged until now. With its newest update, Toyota Philippines has given the MPV a new sportier look thanks to a redesigned face. It now matches the same design language as its stablemates. The Toyota Fortuner and Toyota Hilux still share the same engine and chassis as the Innova. Aside from the exterior upgrades, the Japanese brand has also added new technology to the vehicle for select variants and has removed the gasoline engine option. 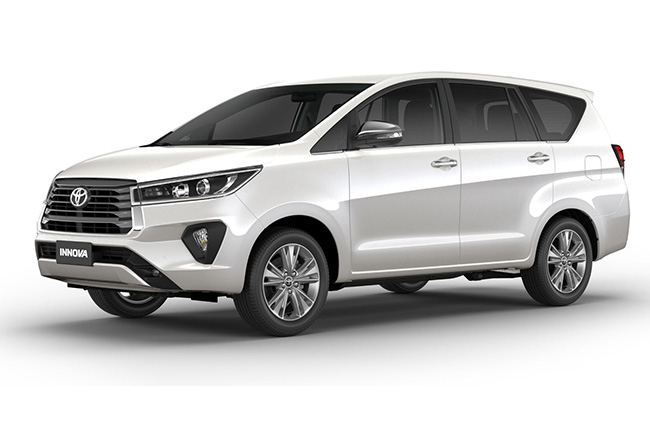 For its refresh, Toyota has given the MPV a new larger grille featuring horizontal slats along with a new front bumper that puts more emphasis on the cuts and creases of the fascia. This gives it a more distinguished look compared to its older iteration, as the new model now features a less-rounded face. The Japanese brand has also included a new set of alloy wheels for the refreshed model along with revised headlights. The lighting elements of the MPV have also been carried over, as the V grade still comes available with LED projector-type headlamps, while the rest of the lineup comes with multi-reflector halogens. LED fog lamps are also now present with the vehicle for the V trim-level, while the G to E models come with halogen lighting elements instead, the J variant, however, does not come with fog lamps available. 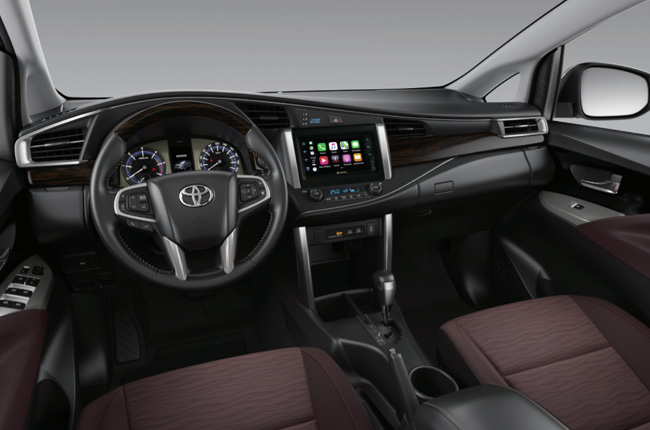 On the inside, the facelifted Toyota Innova remains largely the same as the previous model. However, the Japanese automaker did do a little bit of tweaking to the interior, updating certain materials, and even upgrading the infotainment system for certain variants. For its higher-tier models, the Innova now comes with a 7-inch infotainment system with Apple CarPlay and Android Auto as standard for the G to V variants, making it an even more competitive option for its segment. The E variants get a 6.75-inch audio display, while the J models get a 2-DIN audio system instead. Safety features for the popular MPV remain mostly unchanged over the pre-facelifted model, as it still comes with a driver airbag, passenger airbag, and knee airbags for its lower variants. Higher-tier variants still maintain a 6-airbag count and come with vehicle stability control, hill start assist control, as well as brake assist. The Innova still features industry-standard equipment such as ABS with EBD, 3-point seatbelts for all occupants, and a vehicle security system. A backup camera along with backup sensors have also been added to the MPV but only for its G and V trims. Under the hood, Toyota has dropped the 2.0-liter gasoline variants of the MPV in favor of having a diesel-only lineup. The 2.8-liter turbo diesel engine has been retained but does not come with an increase in power unlike the motors found in the Fortuner and in the Hilux. It still produces 171.6hp and 360 Nm of torque. The transmission options, however, have been carried over from the previous model as the MPV can still be had with either a 6-speed automatic or a 5-speed manual. Eco and Power modes have also been carried over from the previous model.

A quick look at the Toyota Innova’s price list shows that the MPV still retains its competitive standpoint starting at a little over P1,185,000 ranging to P1,754,000 for the top variant with a White Pearl Crystal Shine paint job. While pricing for certain models has increased, the overall lineup has been slimmed down to accommodate the all diesel-powered range. If you want to get your hands on the refreshed Toyota Innova today, then we highly recommend using our Buy Online feature to make the process of getting your vehicle go as smoothly as possible.