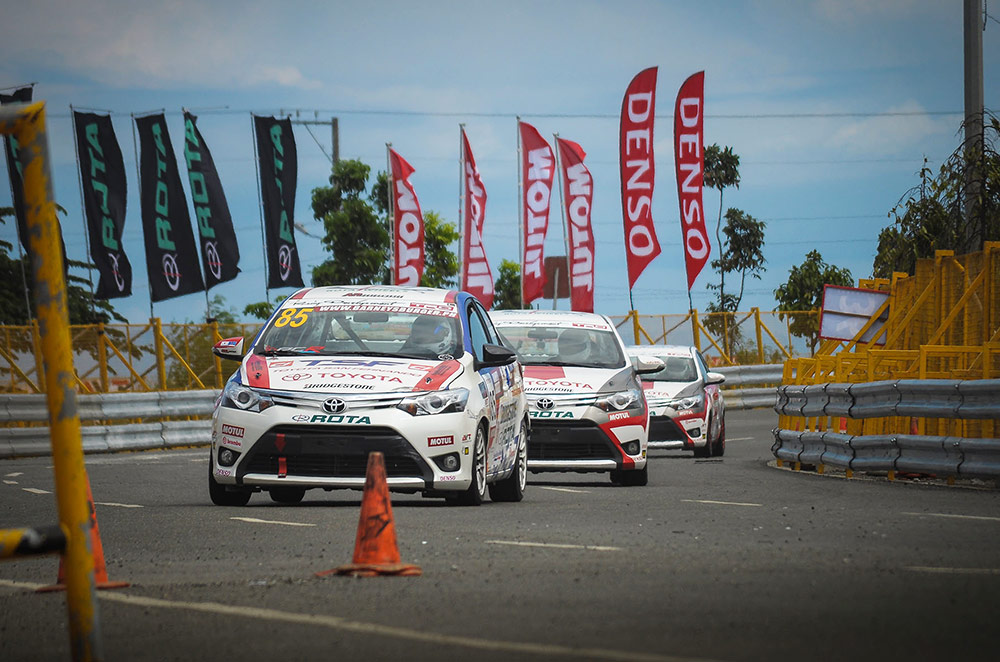 The team's 8-car squad was in full force for the 2nd leg of the 2015 Vios Cup. But results from qualifying mixed up the grid line-up. Pauland Dumlao and Alexis Salvador were now joined by Tonton Ramos in the quicker Sporting Class, while Bombi Palilio drove alongside Steve Bicknell, Paolo Rodriguez, and Dindo Dysico who took over Aflie Conception's place in the Promotional Class.

First leg overall winner Pauland Dumlao in the No. 28 car faced his own set of unique challenges. His car started with an additional 50 kg because of his 2nd and 1st place finishes in Races 1 and 2, respectively. This weight penalty was applied to the winners to even out the playing field in the next race.

Hampering Dumlao’s performance, getting traction on the track's dusty surface forced him to break a lot earlier and made it hard to accelerate out of corners. He qualified 11th to finish in 8th place in Race 3. But because of a 1-position penalty he incurred due to contact in the afternoon race, Dumlao officially finished 11th place in Race 4.

Meanwhile, teammate Tonton Ramos in the No. 33 car qualifed 19th on the grid and improved 3 places up to claim 16th in Race 3.  He would then gain several more places in Race 4 to end up in 14th, overtaking on the narrow street circuit. At the end of the weekend, Ramos was simply happy that his car wasn’t damaged during the races.

As for Alexis Salvador in sister team Toyota Cabanatuan City, lined up 13th on the grid, finished 11th in Race 3 and 13th in Race 4. Commenting on how hard it was to overtake, Salvador said “It was almost impossible to overtake because the passing lanes are tight. Good thing that the drivers were very disciplined and know how to give and take.”

Despite having a couple of mishaps during practice and qualifying, Paolo Rodriguez of Toyota San Fernando drove brilliantly to notch 1st place in both races. He defended his spot against Derek Ramsay and Phoemella Baranda. Although the 2 celebrity drivers were not in the same class as Rodriguez, he still felt the need to protect his position and finish 2nd overall in Race 3.

“I was screaming like crazy inside my car the whole time until I reached the finish line. I will never forget that moment. It was the best racing win of my life so far,” said Rodriguez.

Steve Bicknell in the No. 41 machine started at the back of the grid because of a penalty incurred  as his car weighed less than the required 1,100 kg. Undettered, he fought his way through the field to finish 5th in Race 3 and 2nd in Race 4 at the cost of Dysico who trailed him in 6th and 3rd, respectively.

Although Team Toyota San Fernando – Toyota Cabanatuan City failed to make it on the podium in the Sporting Class, they're more than thrilled to dominate the Promotional Class with back-to-back wins from Rodriguez.