The need for new transport, cleaner air, and more organized mobility are just few of the agendas of the Philippine government’s PUV Modernization Program. The said program looks at phasing out approximately 200,000 units of old jeepneys, trucks, and buses that harm the environment.

If this program succeeds in meeting its goal, then it would seem like that the age of squeezing 20 people in an 18-seater jeepney might end soon – but are we really ready for such move?

And, last month, Gazelle Motors Corporation's received shipments from Russia that claimed to be the promising solution to said transportation issues. The first batch of shipment saw the Gazelle Next – GAZ Group’s light commercial vehicle that will be introduced to the Philippine market  initially with four variants: Citibus, Van, Premium, and Executive Class. All variants were customized according to their respective functionality, with seat configuration varying to their use.

"Finally, the Philippines will benefit from advanced technology from Russia with respect to reliable and competitively-priced vehicles. Thanks to the aggressive economic diplomacy of President Rodrigo Roa Duterte, with his historic visit to Russia, which paved the way to this partnership."
Dr. Fernando Martinez
Gazelle Motors Corporation chairman and CEO

The newcomer Gazelle Next is foreseen to be the next face of UV Express units. Up to 19 passengers will fit inside the Citiline variant, more than the capacity of a typical UV Express unit – plus the high roofline allows additional passengers to stand. With such features, the Gazelle Next's closest competition is the Hyundai H350. So, does this mean that the H350 is an ideal UV Express unit? Let's look at the price point. At a press conference, Dr. Martinez shared his ideal estimate about how much a unit could cost. With subsidiary, the unit would have a price tag of P1.2 to P1.3 million (official prices are promised to be announced soon). This is half the price of the Hyundai H350, although it costs more than existing UV Express units.

However, despite being a little pricey compared to the vehicles normally used as UV Express units, the Gazelle Next boasts more room for passengers and better comfort that support the Russian standards. For GAZ Group's head of sales in Asia Kristina Dubinina, prices will be determined after the fleet has undergone a series of test program in the Philippines. The aim is to see how the people feel about the vehicles, which, according to her would ideally take two months or so.

Another advantage that makes the Gazelle Next as an ideal choice for the local modernization program is its Euro 4 to Euro 5 emission standards. Not only does it offer more room and capacity, it will also help the country achieve safe and clean surroundings in the next few years.

Meanwhile, features such as the electro-mechanical low step and the Stop Request button makes it easier for the passengers to go in and out the vehicle. There will be no need to hurt your vocal chords after yelling "para po" over and over to the driver. 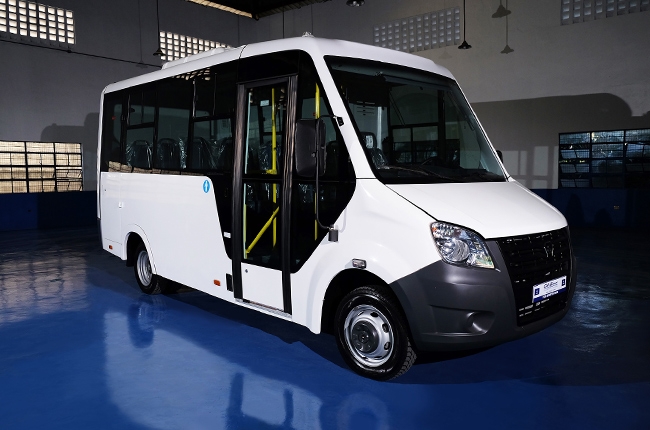 In addition, Dubinina claims that the Gazelle Next is designed to withstand high humidity and temperature of up to 53 degrees Celsius. Apparently, the GAZ Group vehicles are made in versions that would cope different kinds of driving conditions particularly these four: desert, snow, mid-climate, and tropical.

When asked about a local assembly plant, Dr. Martinez said that the company plans of putting up one, but it might not happen in the near future. According to him, that kind of facility can produce a rough estimation of 2,000 units annually. He further noted that Gazelle Motors Corporation plans to localize parts and components for affordable repair and maintenance cost. Other than importing the Gazalle Next as a potential candidate for the new face of the Philippine public transport, it is important to note that there are more vehicles from the GAZ lineup that will be available in the Philippines.

Gazelle Motors Corporation plans to introduce the Gazon Next and Sadko next month. The GAZ bus and truck models will be showcased at this year's Manila International Auto Show.