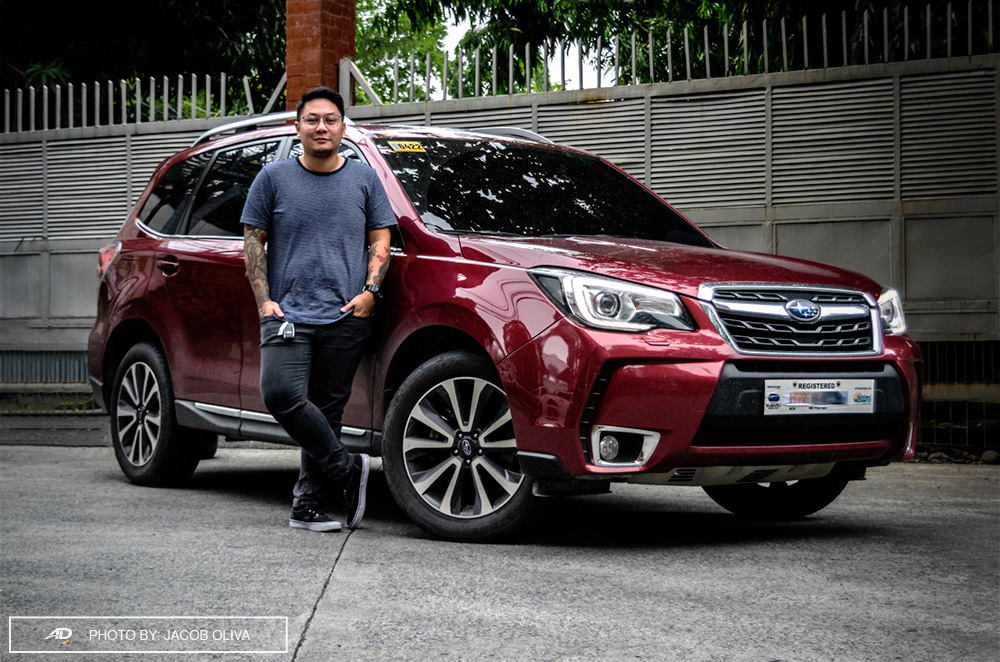 Last chance. If there’s any perfect phrase to describe the current Subaru Forester, it will definitely be this. The Philippine-bound 2019 Forester has been announced recently, and it came with a bit of an unsettling news with it – it will no longer have the turbocharged XT in its lineup. While this may be sad news for some, we have yet to drive the next-generation model to give judgment.

What we did, however, was to seek what could we miss on the outgoing Forester 2.0XT. This maybe, just maybe, help you realize that this could be your final opportunity to get your hands on a brand new, turbocharged Subaru Forester before the fifth-generation model comes in. Let’s give Popoy his last chance, shall we?

Performance
Engine Output (HP), Acceleration, Transmission, Handling 4.0/5
Design
Exterior & Interior Design, Quality, Fit and Finish, Ergonomics 3.5/5
Ride Comfort
Cabin Comfort, Suspension, NVH Insulation 4.5/5
Safety and Technology
Convenience Technologies, Active and Passive Safety Features 4.5/5
Value for Money
Amount of the vehicle you get for the price, Fuel Efficiency 4.0/5
What You Will Like
What You Won't Like
How We Do Our Reviews Powered by a 2.0L turbocharged flat-four Boxer engine, the Forester XT we tested was a huge deviation from the non-XT variants. All three variants have the same engine size, but the addition of turbo in the XT skyrocketed the power output, dialing it up to 238 hp and 350 Nm torque. While the engine displacement may sound puny for the Forester’s size (it’s between the XV and Outback), it’s totally the opposite when driven.

The Forester XT is nothing short of power in any driving condition – whether uphill, on the highway, wide provincial roads, or even on steep ramps. Accelerator inputs are recognized easily, and you can thank the Lineartronic CVT for that. This transmission sends the power to all wheels with great timing, while having the option to shift manually through paddle shifters. As with most cars with forced induction, there’s a bit of a lag in the Forester XT but it didn’t make the car feel cumbersome at all. Low-end torque delivery was easily felt, even when from complete standstill, and it just got better when running 80–100 km/h.

The mentioned driving behavior was observed when in the Forester’s Intelligent mode, which was supposed to provide a more linear power delivery. Switching to modes such as Sport (S) and Sport Sharp (S#) breathes a different life to the power plant, making the Forester more responsive, aggressive, and perky. Overall, even if I were to summarize how it felt to drive the Forester XT in two words, it would be “fun” and “exciting.” I just have one tiny bit of qualm, though – I had a hard time driving in reverse while on steep inclines, but that’s just about it. The exhilarating drive pairs nicely to the XT’s great handling. Although the steering feels too assisted at times, Subaru’s combination of Symmetrical All-Wheel Drive system and Active Torque Split proved to be effective in providing precise steering on twisted roads. It made the whole ride felt safe and stable. There’s considerable body roll, yes, but that’s normal for a crossover with 220mm of ground clearance. Highway drives were also composed even with the light steering feel. Ultimately, its brakes were more than enough to make you feel safe even on fast runs.

With the Forester XT’s solid engine performance comes a curse: its fuel consumption. Highway speeds nailed at 90 km/h on cruise control hit 14.1 km/L, while city crawls at 15 km/h average clocked in 5.1 km/L. Tad faster paces at around 60 km/h read 9.6 km/h. But maybe I’ve had too much fun with the car, so there’s that. When it comes to its exterior styling, the Forester is just like any Subaru crossover – it’s not the prettiest out there, but it doesn’t look as bad as Jabba the Hutt. It has a generous splash of chrome, which isn’t really for everyone, and its shape isn’t the sleekest among the compact crossovers. What makes the Forester’s look stand out, however, is its lighting configuration. The sharp daytime running lights and LED taillights look imposing during the day, while the automatic, steering responsive headlamps take care of keeping the roads well-lit at night.

I also love the design of the front bumper. The faux, vertical air vents give character to the car’s front fascia, which is actually reminiscent of Imperial Stormtroopers – if only the media unit came in white. But that’s just me; maybe I’ve had too much Star Wars the past weekend, but I digress. 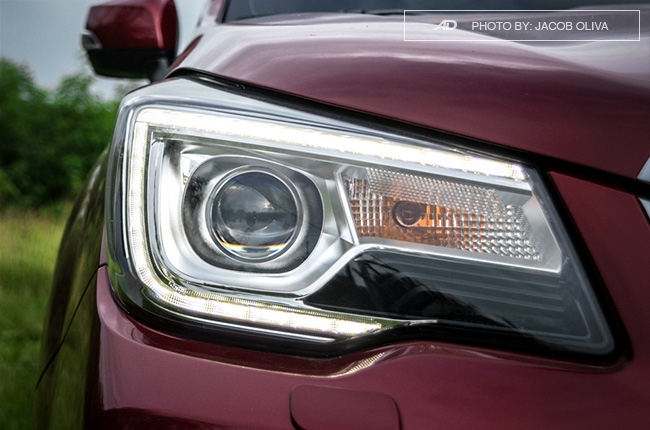 Another thing I like about the Forester is its striking 18-inch aluminum alloy wheels. Partnered with the fender flares and some underneath claddings, they make the car look tough and ready to go anywhere. Actually, it can, with the X-Mode. This feature, which is also found on the Outback and XV, takes over the car when going through challenging and unsafe terrains. It does work, but you still have to be cautious as the Forester isn’t a full-fledged off-roader with its monocoque body construction.

Overall, the Forester’s exterior styling isn’t one of my favorites, but it’s functional than most of its rivals out there, so that’s still a pass. As the XT is at the top of the Forester range, it gets all the good things and toys from Subaru. With that, it gets several convenient driver-assist features such as rain-sensing wipers, auto-leveling headlamps, headlamp washers, cruise control, eight-way power adjustable driver seat with memory function, keyless access, power tailgate, reverse camera, and push button start.

It also comes with dual-zone automatic climate control that actually works, and a gargantuan power sunroof that extends up to the second row. The latter increases the probability of your passenger falling in love with you when he or she sees the stars at night. 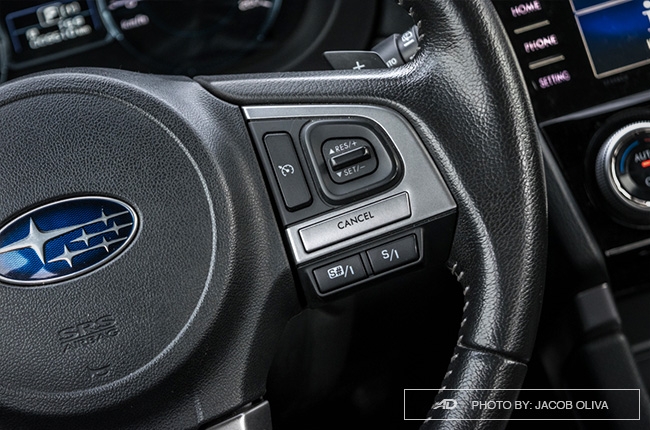 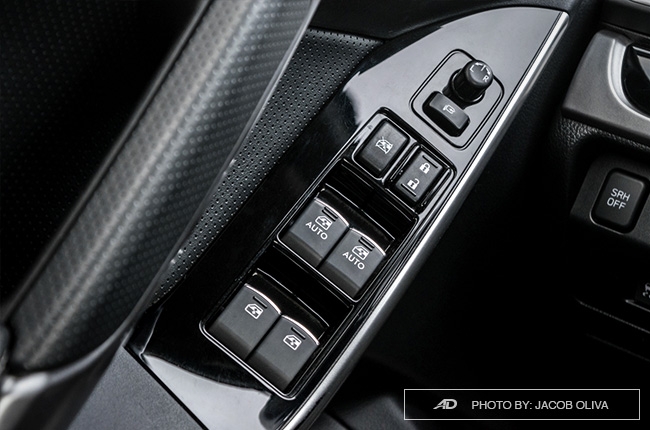 The mood set by the sunroof is paired with high-quality materials, soft plastics, and supple perforated leather, sans the piano black accents. Admittedly, some parts of the car need update, like the display quality of the LCD between the gauge clusters and the multi-information screen on top of the dashboard. Nevertheless, the touchscreen infotainment system is painless to operate, and the Harman/Kardon speakers produce crisp sound that would rival your favorite brand of lechon.

The lack of air vents for the rear passengers isn’t a problem, as the huge amount of wiggle room spells comfort. In fact, the whole car can seat five full-size, tall adults. The soft suspension also provides great ride quality, and it absorbs road imperfections effectively. Partnered with solid outside and engine noise isolation, it makes riding as cozy as your couch at home. As for the cargo space, let the photos below speak for itself. It’s still too early to say if the upcoming non-turbocharged 2019 Forester would disappoint the patrons of the nameplate. But considering what the current Forester XT can offer, buying a unit now won’t turn into regret, even if it means that you’ll be buying an older model.

The P2,048,000 is arguably steep for a crossover, but then again, Subaru isn’t a carmaker for everyone. It has a niche market of car-buyers who want the best Japanese crossover without opting for its European counterparts.

Last chances are sometimes overrated, but with a car that’s composed and comfortable, all while being powerful, agile, and fun-to-drive, I’m pressed to recommend that you take this final shot at owning one. With the imminent model change by January 2019, I’ll definitely miss the overall positive experience I’ve had with the XT. And because of that, I sincerely hope the 2019 Forester will live up to its predecessor.