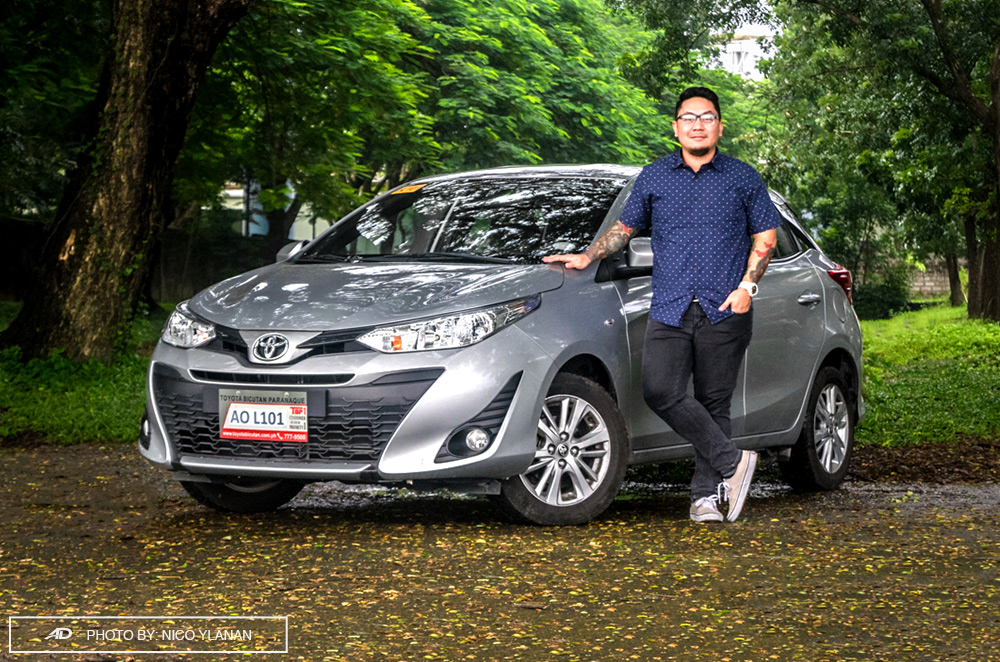 When the Toyota Yaris came out early this year, a lot of people raised their eyebrows with its pricing. The top-of-the-line G variant sells for more than a million pesos, something that would detract budget-conscious car buyers. This holds true even with the fact that similarly-specced subcompact hatchbacks are within the same price range. Still, if the price tag reaches the seven-digit mark, the public tend to see it as an unattractive choice.

With that, the CVT variant of the base Toyota Yaris 1.3 E fits the bill. It’s within the 900k-peso range while keeping the same compelling appeal of the Yaris and the convenience of automatic transmission. But what can this base variant offer to the Filipino car-buyers? And does its smaller engine make a lot of difference when it comes to performance?

Performance
Engine Output (HP), Acceleration, Transmission, Handling 3.0/5
Design
Exterior & Interior Design, Quality, Fit and Finish, Ergonomics 3.5/5
Ride Comfort
Cabin Comfort, Suspension, NVH Insulation 4.0/5
Safety and Technology
Convenience Technologies, Active and Passive Safety Features 4.0/5
Value for Money
Amount of the vehicle you get for the price, Fuel Efficiency 3.5/5
What You Will Like
What You Won't Like
How We Do Our Reviews 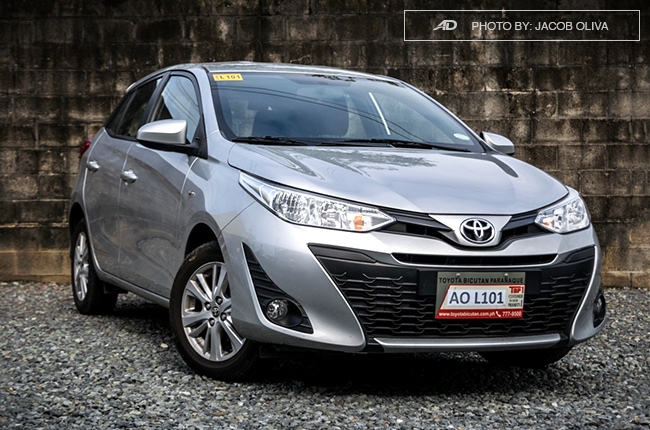 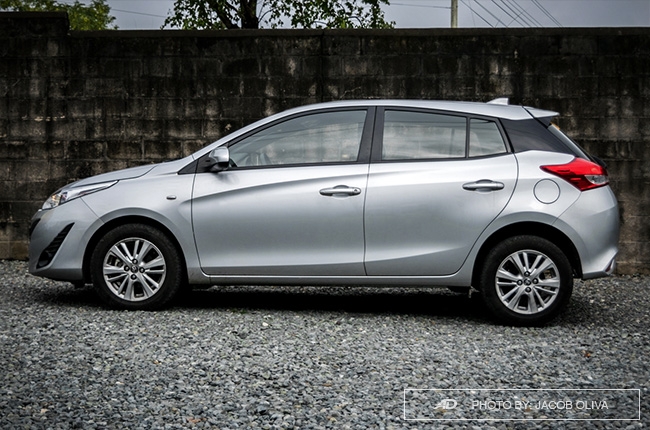 Outside, the biggest difference between the range-topper Yaris from the base variant is the absence of daytime running lights (DRL). While the safety leverages of DRLs are arguable, its aesthetic advantage is apparent, along with the red accents that are also missing on the base variant. Good thing the base variants didn’t lose the fog lamps to go with the Yaris’ fresh look this year.

Other things you’ll miss with the base Yaris are pretty mandatory like the color-keyed side mirrors and door handles. The headlamps are a four-bulb type, while the taillights exchange the LEDs for the bulb type, as well. Not so much of a difference with functionality, but more on the looks. 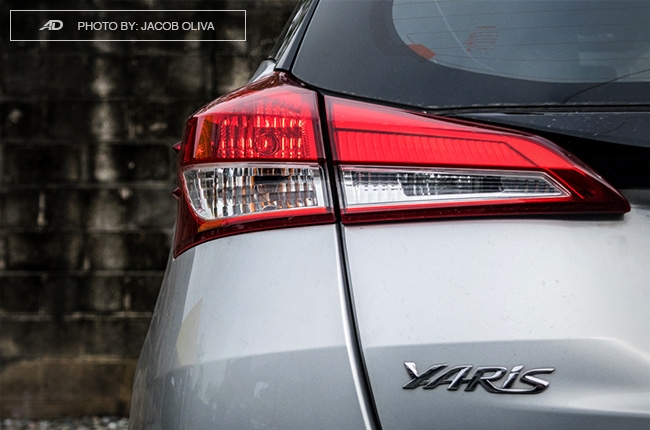 What’s great with the base Yaris E is that it retains the 15-inch alloy rims that are available with the G; guess you wouldn’t have to settle for steel rims if you go for this one. It also has the third brake light and reflectors at the back, which I really find as important and underrated safety features. Shark’s fin antenna also remains intact.

Overall, considering all the downgrades from the top-of-the-line G variant, and the fact that the media unit came in gray, the Yaris E is less exciting to look at. Initially, at least, as this gives you room for future upgrades and customization, which is a good thing. While there are several things to sacrifice on the exterior if you’ll opt for the Yaris E, the interior is a different story. You’ll essentially get the same look inside the E compared to the G, sans the red accents and some functionalities. This includes the open, spacious feeling inside the cabin, along with well-placed buttons, padded armrest by the doors, and the well-bolstered seats clad with suede-like fabric. The contrasting red stitches have been replaced with blue, which is fine in our books.

However, even my qualms from the G are found inside the E. It’s still challenging to find the ideal driving position with the absence of a telescopic steering wheel. The cupholders are deep and the center console box is still positioned too far behind to be used as an armrest. 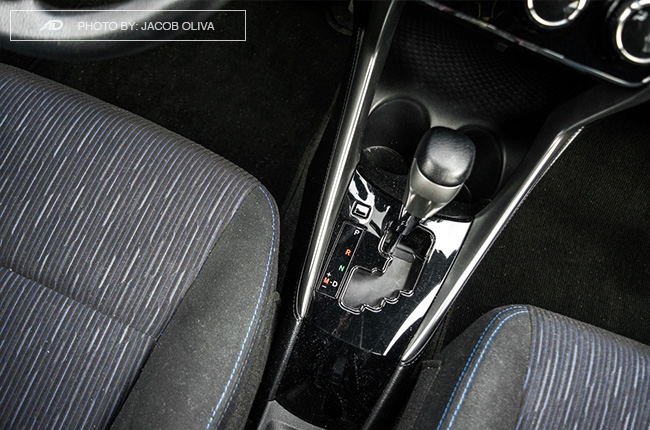 The preference mentioned above also applies to the Yaris’ seven-inch touchscreen infotainment system that doesn’t have a volume knob. I’m a fan of the latter, as it’s easier (and safer) to adjust the volume with a knob or at least through the buttons on the steering wheel, which the E variant also lacks. Nevertheless, smartphone pairing via Bluetooth is seamless, and it reads my phone as an iPod so playing Spotify while driving is a cinch. 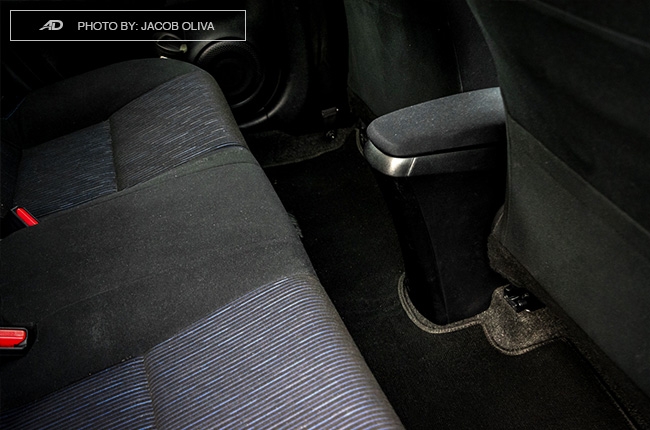 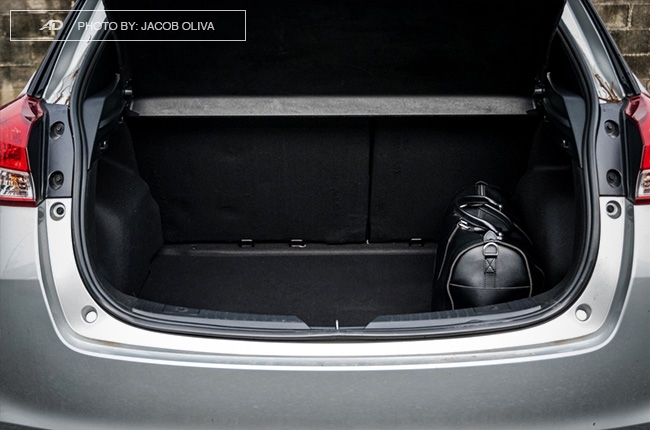 While space at the front is abundant, rear passengers would enjoy the same roomy feeling, too.  But there isn’t much to play around with while in the back – no air vents, no cupholders (although there are huge bottle holders by the doors), no USB charging ports, and no foldable center armrest. Although, the rear seats fold in 60/40 fashion to reveal a huge amount of cargo area, which is the very thing that I like about hatchbacks over sedans.

With that space advantage comes notable ride comfort, which is well-supported by the Yaris’ suspension. It can absorb reasonable road imperfections without inflicting impact on the occupants of the car. NVH can be improved, though, and there’s noticeable body roll when turning at speed. 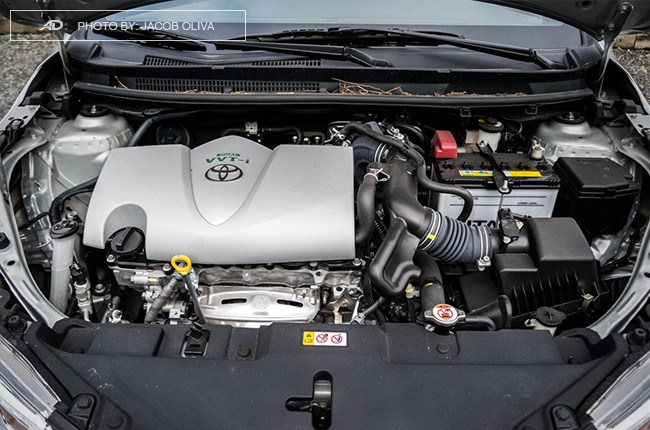 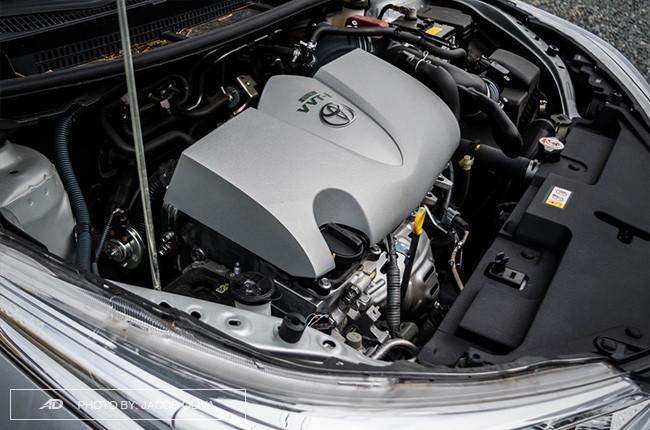 Perhaps the biggest downgrade from the G to the E is the engine displacement. Powered by a 1.3L 1NR-FE engine inside its bonnet, the E is capable of producing 98 metric horses and 121 Nm. The difference from the G’s 1.5L is measly on paper, but it’s noticeable on the actual drive.

The Yaris isn’t the fastest thing on the planet, but the 1.3L gave just enough to pull the car forward even with five people on board. Although, I’ve noticed that the engine worked harder when floored, especially from crawling speeds, with the tachometer reaching around 3,000 to 4,000 rpm before it brought the car to a comfortable plateau. The “rubber-band” effect of the CVT was also evident. It doesn’t have ECO and Sport modes as well, but you have the option to manually “change” gears using the +/- fencing of the gear shifter. This setback is only felt at low and early-mid speeds, but once the Yaris got to its pace, it becomes comfortable to drive and the uneasiness feeling goes off. That reflected on the fuel consumption as well: highway stints nailed at 90 km/h registered 21.1 km/L, while running 60 km/h clocked in 14.3 km/L. These numbers were better than the 1.5’s fuel economy, but since the engine had to work harder at crawling speeds, the 1.3 suffered with a 7.1 km/L reading during in-city traffic chores.

Though the Yaris 1.3 E is lighter by 30 kilograms than the 1.5 G, the difference in handling is hardly noticeable. The steering still feels really assisted and would need to be tightened a bit for a more composed highway cruise. There’s also a bit of an understeer when tacking long curves. Why? Across all three variants of the Yaris, whether it’s the manual or the CVT you’re getting, each car is equipped with driver, passenger, side, knee, and curtain airbags, as well as vehicle stability control, ABS with EBD, brake assist, and hill start assist system. It’s the only option out there that's equipped with these even in its entry-level variants. While these safety features might not be a deal breaker for you, when that time comes (which hopefully won’t), you’ll be glad that your car came in with them. 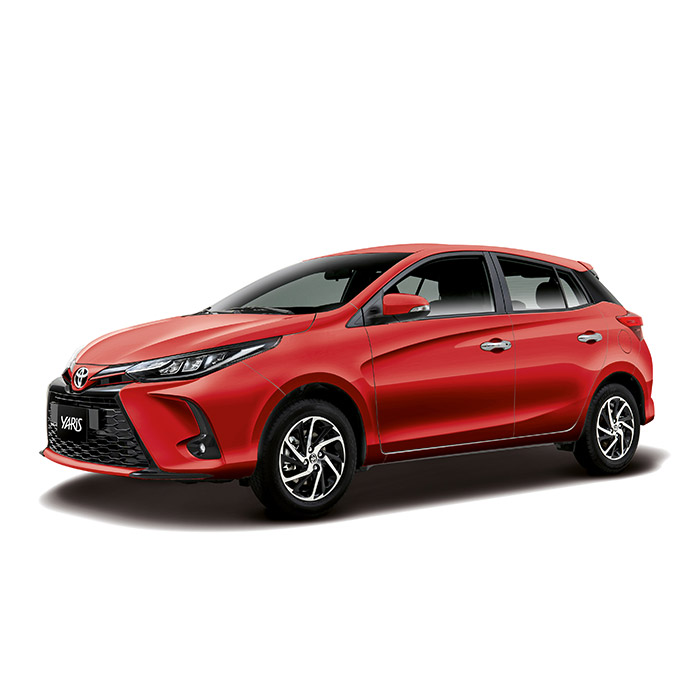 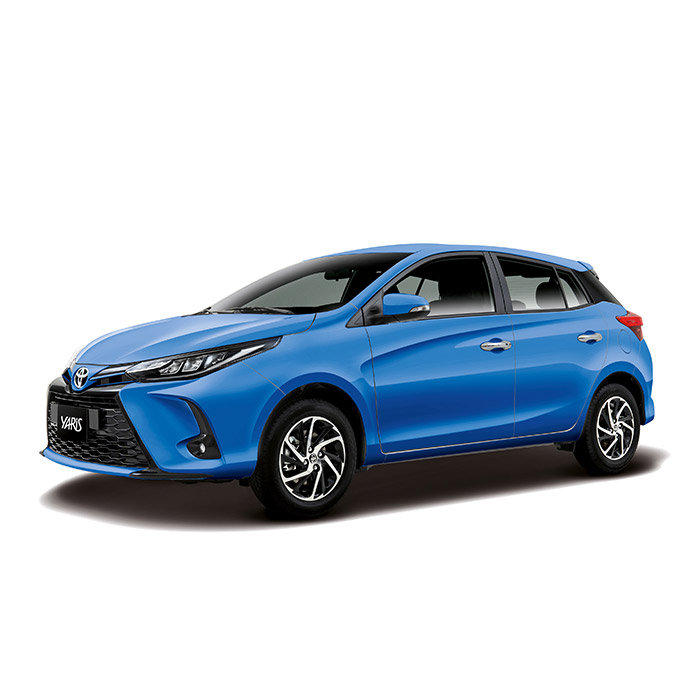 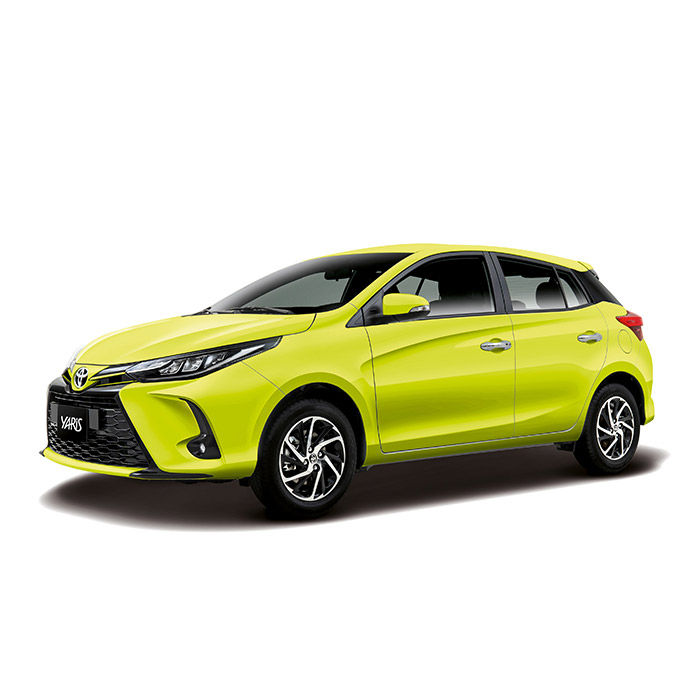