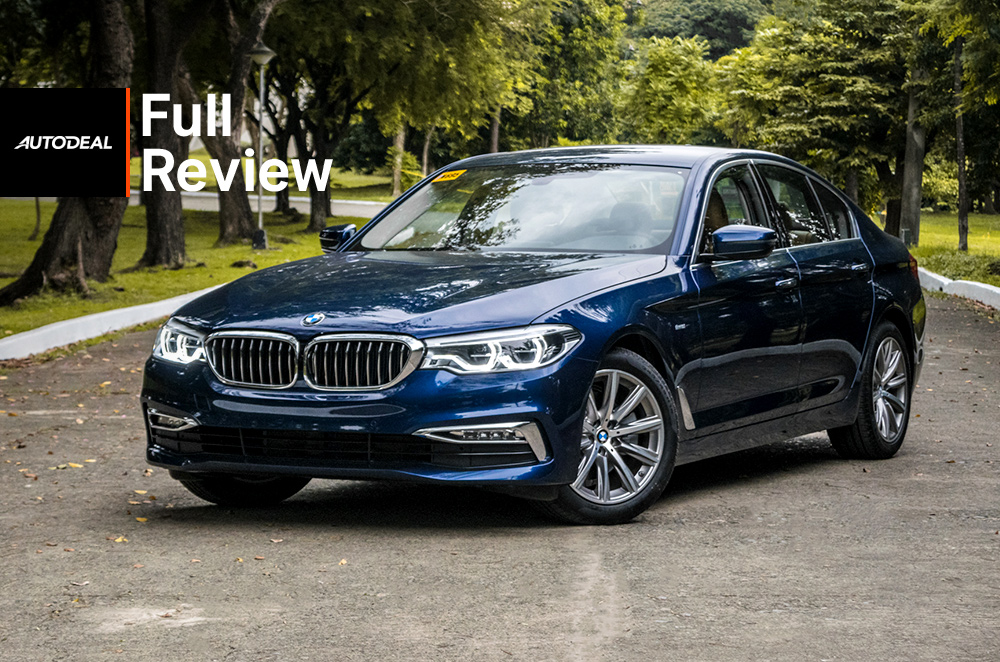 When BMW announces the availability of an entry-level, gasoline 5 Series in the Philippines, it came with a two-word overarching phrase: Business Athlete. This isn’t really a stretch because the 5er is born to have both the 3 Series’ driving pleasure, while also carrying the 7 Series’ corporate sense. In short, BMW wants to tell you that the 5 Series should give you the best of both worlds.

I would agree on ‘business’ – after all, the 5 Series is a veteran member of the executive class, aimed to attract businessmen who want to be driven around rather than plight the chaos-struck traffic situation of Metro Manila by themselves. With money to buy a German luxury vehicle, that seems fair enough.

‘Athlete’ was the one that has piqued my interest. A four-cylinder gasoline engine powering a huge sedan that weighs above 1,600 kilos seems like a mismatch at first glance, but that’s what we’re here to find out. Is going for the entry-level 5 Series a compromise worth taking? Here’s my full review of the BMW 5 Series in its 520i Luxury variant in the Philippines.

Performance
Engine Output (HP), Acceleration, Transmission, Handling 4.5/5
Design
Exterior & Interior Design, Quality, Fit and Finish, Ergonomics 4.0/5
Ride Comfort
Cabin Comfort, Suspension, NVH Insulation 4.5/5
Safety and Technology
Convenience Technologies, Active and Passive Safety Features 4.0/5
Value for Money
Amount of the vehicle you get for the price, Fuel Efficiency 4.5/5
What You Will Like
What You Won't Like
How We Do Our Reviews 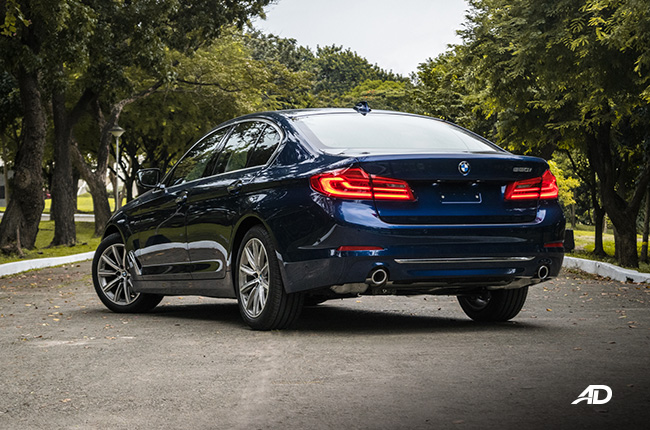 If you’re a fan of the BMW 5 Series, it’s hard to deny that the latest G30 generation that we have here takes a lot of design cues from its F10 predecessor. It took the good things from the previous iterations and improved them further for a subtle yet effective change. That’s good at a wider scope but if you’re tired of the F10’s look, you’ll probably want revolutionary changes and to that, expect some dismay.

Major design updates, however, should not be overlooked, such as the wider kidney-grille that now flanks the tad-thinner set of headlights. This is reflected at the rear, with the narrow LED taillights giving the midsize sedan a sleek styling. Some bits of chrome complete the entire package, as well as the Mediterranean Blue Metallic paint job that screams Munich.

As the newest base midsize Bimmer, the 520i doesn’t deviate too much from the higher-spec 520d and 530d in terms of exterior design. In fact, you’ll be hard-pressed to find what differs, but I guess that’s what I'm here for. Aside from the 520i badge at the rear, the base variant’s wheels are smaller, albeit not really minute at 18s versus the 530d’s 19s, but that’s just about it. The 520i still dons the same luxurious and mature BMW demeanor – and that’s a good thing if you’re worried about image. Genuine cowhide in tan, almost orange, will greet you inside the 520i. The color itself radiates a somewhat youthful yet mature vibe – much like your midlife tito who effectively wears a current fashion trend. The leather, on the other hand, feels soft and supple, which will make you thank BMW for cladding most of cabin’s touchpoints with this material. What might put off some, however, is the heft of piano black plastics used that replaced the wooden accents of the pricier variants. This material arguably looks good but it can be cumbersome to take care of.

Nevertheless, beyond the shiny blacks, the cabin emanates the expected luxurious vibe; even the few plastic parts are soft-touch and out of sight. The ambient lights give off a posh vibe at night, while the driver’s wiggle room is also great despite the rather large steering wheel and equally wide central console. There are plenty of storage spaces to put your stuff in, but the center console box is a just little bit compact than expected – that’s fine since it houses the USB port for the infotainment and can still fit my sizable smartphone. The 520i’s quad-zone climate control system, which has a separate control at the back, isn’t questionable, plus the soft seats will coddle its occupants even at first seating. In combination with the pliant suspension that makes concrete roads feel like asphalt, along with the superb NVH insulation and hefty space, the 520i’s stellar ride comfort isn’t actually a compromise compared to its pricier counterparts.

Speaking of space, the 5 Series’ trunk space defaults to a massive 530L cargo volume – more than enough for a golf bag, an overnighter, and even a two-fold child stroller, all at the same time. The only qualm would be when loading up long items as the rear seat backrests don't fold to expand the cargo room. But really, would you haul those kinds of stuff with your BMW? 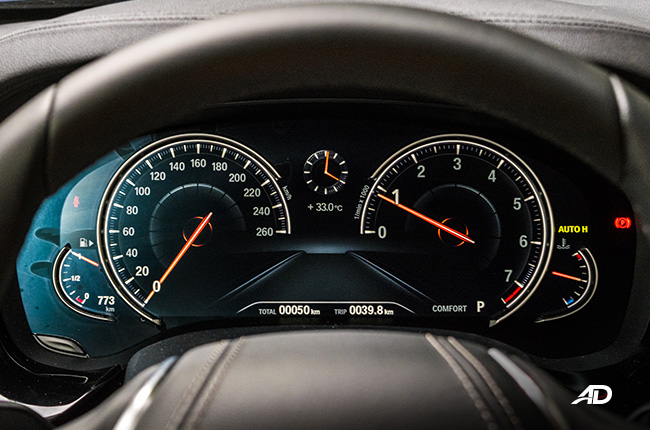 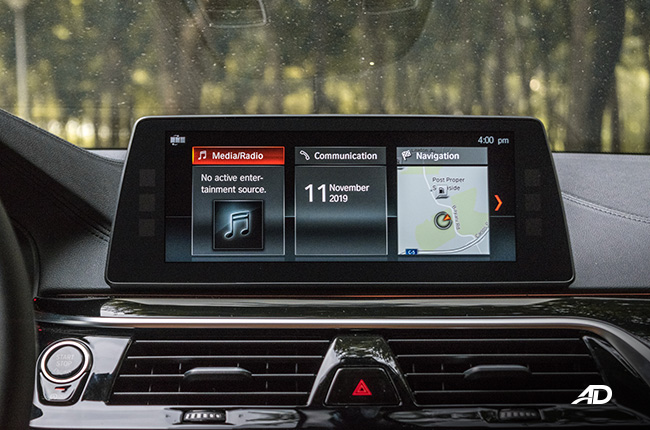 For a base variant, the 520i is generously equipped with tech toys and conveniences. Most notable is the adaptive LED headlights that have auto high-beam function, which adjusts itself in order to not blind oncoming vehicles. It’s a trip, really, as well as the soft-close doors. High-resolution colored displays crown the cabin – a 10.25-inch screen houses your infotainment (without Apple CarPlay/Android Auto, though), while the configurable instrument cluster is a seamless 12.3-inch screen as well. No complaints at this point, except maybe for the gimmicky gesture control for the infotainment system and the intermittently working auto-tilting right side mirror.

However, considering that the 5 Series is a luxury midsize sedan, I can’t help but look for some missing features in the 520i. It doesn’t have seat ventilation or 360-degree cameras, plus the car’s devoid of a sunroof. But then again, this is the base variant, so that would be on your list of compromises when going for a more affordable option. 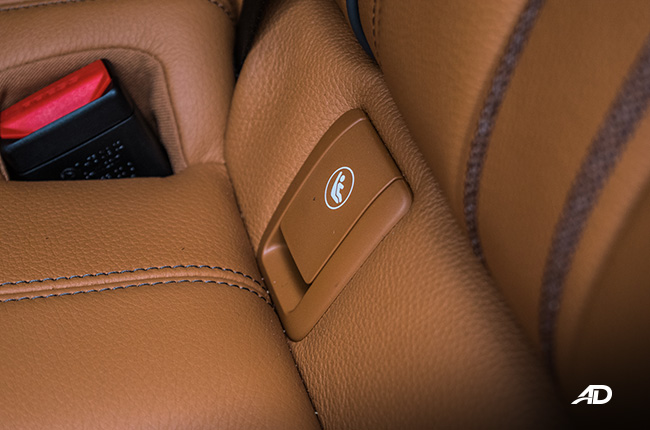 Of course, BMW took care of the 520i’s safety features despite it being an entry-level model. Basics like six airbags, stability control, ISOFIX child seat tethers, seatbelt reminders, and ABS come standard. It also comes with run-flat tires with a pressure indicator, so that’s one less thing to worry about especially on long drives.

Then again, don’t expect adaptive cruise control and lane-keeping aids at this price point, but it’s kind of a surprise for BMW to miss out on blind-spot monitors even for its entry-level 5er. Now, on to the juicy part – the 520i’s turbocharged 2.0-Liter inline four-banger that spews out 184 horses and 290 Nm of torque. It’s the only gasoline-fed model in BMW Philippines’ 5 Series lineup, but that didn’t take away from the driving prowess that the nameplate has been known of. Not much, to say the least.

The 520i Luxury isn’t slow, especially if you’re the type who has a mature disposition in driving. The 8-speed Steptronic transmission sends the power intently to the rear wheels, matching various accelerator input with precision. There was never a time that power felt lacking and it got me up to speeds pretty quickly, but not as quick as its more powerful diesel counterparts. There’s just one quirk, though, and that’s when coming to a stop after a spritely run. There’s a bit of a shudder coming from the engine bay, which could be because of regenerative braking that this car employs.

As for handling, the 5 Series was obedient for its length and with the driving aids on, it was rare to feel the rear getting out precariously. Positioning myself on the road was a cinch, and there was also a harmonious sense of balance even on mountain passes. On tight spaces, though, the 520i was a challenge to maneuver since it felt wide than what it actually is, which says a lot about how thick the doors are. As a gasoline-burner, the BMW 520i Luxury still registered good fuel efficiency numbers, especially on fast drives. At an average speed of 60 km/h, it returned 15.7 km/L while highway runs at 90 km/h clocked in 18.9 km/L. Those numbers weren’t bad at all, especially for a midsize sedan. In the city, though, I was able to get 7.6 km/L after an hour of painful crawl on EDSA. This year, BMW Philippines chooses to get its 520i Luxury model from Malaysia as a CBU, effectively bringing its SRP down to P3,990,000 for a limited number of units. Considering all the things that I’ve mentioned here – quirks included – this base model 5 Series isn’t a bad deal at all. It's well-equipped, nicely-crafted, and most importantly, still drives like a BMW. There can never be a bad thing about that.

For what it's worth, the BMW 520i Luxury is now the most-affordable luxury midsize sedan that you can buy locally, effectively undercutting its rivals by a mile – all while keeping its value and soul as a BMW. Let's hope that BMW Philippines keeps it that way. 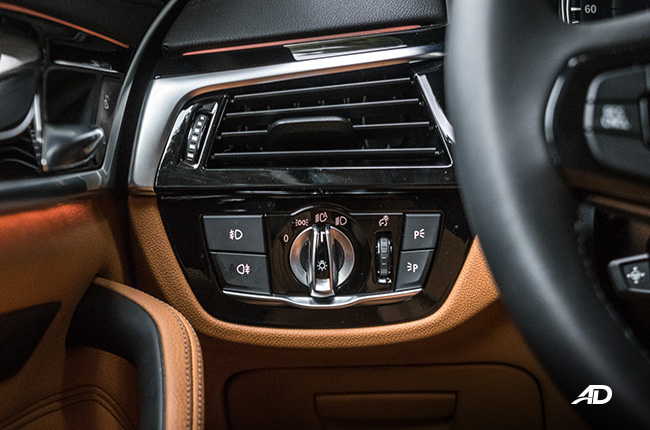