When the fourth-generation Mazda3 was launched last year, there were essentially two variants to choose from for both sedan and hatchback models, along with two engine options. Naturally, motoring journalists flock to the highest Premium trim that comes with all the bells and whistles that Mazda could offer.

But real-world car buyers aren’t too keen on top-spec models, primarily because of the seemingly hefty price tag. To this date, we have already received several inquiries about the entry-level Mazda3 – is it any good? What sacrifices are they looking at? Does it bring more value?

These questions bring us to this review. With a P200,000 price difference, is the base Mazda3 1.5 Elite sedan too much of a compromise compared to the top-of-the-line variant? Let’s find out.

Performance
Engine Output (HP), Acceleration, Transmission, Handling 3.5/5
Design
Exterior & Interior Design, Quality, Fit and Finish, Ergonomics 4.5/5
Ride Comfort
Cabin Comfort, Suspension, NVH Insulation 4.5/5
Safety and Technology
Convenience Technologies, Active and Passive Safety Features 4.5/5
Value for Money
Amount of the vehicle you get for the price, Fuel Efficiency 4.5/5
What You Will Like
What You Won't Like
How We Do Our Reviews Aesthetic differences between the top-level Mazda3 Premium and Elite variants aren’t night and day, and that’s a good thing. Halogen daytime running lights (versus LED) and a smaller set of 16-inch Gray Metallic aluminum alloys (versus the 18-inch Gun Metal alloys) are the only things that differ the base model from the top-spec.

That means, even as a base model, the Mazda3 still has the minimalist design approach of the Kodo 2.0, which employs beauty in simplicity and is seen in newer Mazda vehicles in the lineup. The headlights are still LEDs, too, which is among niceties of this car, though it loses the adaptive functionality.

I’ve mentioned this before, but I'm more of a fan of the Mazda3 sedan than the 5-door model for this generation, and that’s coming from a fan of hatchbacks. That holds true in the entry-level Mazda3, plus the fact that the media tester’s enticing Deep Crystal Blue paint is endemic to this variant. Upon opening the Mazda3’s meaty doors, manual fabric-clad seats will greet you, which is one of the compromises that we’re talking about. Surprisingly, the deviations in materials used in the cabin end there, as the dashboard, center console box cover, door cushions, and the steering wheel are all clad with the same leather found in the Premium variant. Even the digital instrument cluster, heads-up display, and the 8.8-inch LCD infotainment system are still there. And so are the scratch-prone piano black plastics, so there’s that.

It’s the same story at the back. The rear seats are fabric-clad but you still get a foldable armrest with cupholders, air-conditioning vents, and relatively roomy door pockets. The trunk is spacious enough, plus you still get the lever that you can use to fold the rear seats. And oh, the Mazda3 Elite doesn’t have a sunroof, if that’s important to you. The Mazda3 Elite’s ride comfort is marginally better than the Premium trim, primarily because of the smaller rims and taller rubber. It’s more forgiving to road imperfections and quite pliant to different road types. The fabric-clad seats are soft and supportive while noise insulation’s superb, as well; only the engine’s roar enters the cabin and that too is a welcome sound. Moreover, the air-conditioning works well even at high noon.

Creature space, on the other hand, is pretty much the same for all Mazda3s – roomy in front, tight at the back for three tall persons. But since this is a Mazda, that shouldn’t come as a surprise, really. This is where some of the P200,000-worth of compromises fall – technology, particularly Mazda’s I-ActivSense suite of safety and convenient tech toys. In the Mazda3 Elite, you get cruise control but it doesn’t adjust its speed accordingly; automatic headlights that aren’t adaptive; and an auto-dimming rearview mirror that isn’t frameless. If you’re lazy, the extra steps should be a bummer but for most, these should be more than okay. Besides, it still has electronic parking brakes with automatic brake hold, a heaven-sent feature amidst heavy city traffic.

So apart from the bevy of digital niceties, the Mazda3 retains the high-resolution screen with Apple CarPlay and Android Auto. The operation’s still seamless plus handsfree calls are still crisp and clear. The regular non-Bose 8-speaker setup isn’t too shabby, as well. As mentioned, the Mazda3 Elite loses the I-ActivSense suite of safety features, which means it doesn’t have lane-keeping aids, blind-spot monitors, front/rear cross-traffic alerts, smart brake support, and driver attention monitoring. You also lose front parking sensors and the 360-degree monitor, but you still get rear parking sensors and a wide-angle camera.

Even without these high-tech toys, the Mazda3 is still one of the most-equipped compact sedans in terms of passive safety features. These include 7 airbags (dual front, dual side, left and right curtains, and driver’s knee), ABS with EBD, dynamic stability control, pedal misuse alert, ISOFIX child seat tethers, and seatbelt reminders for all occupants. 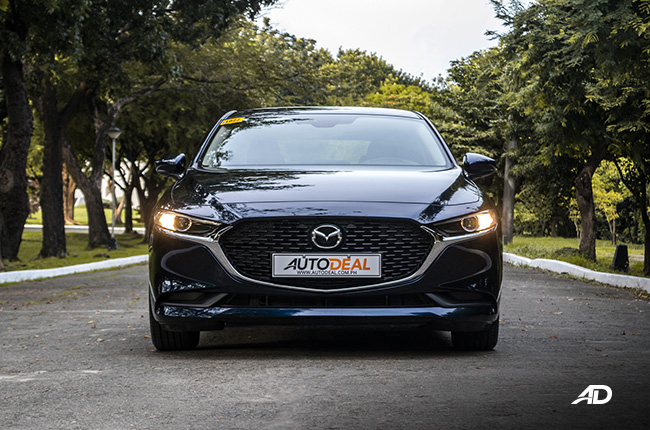 Going for the base Mazda3 means that you’re choosing the smaller 1.5L engine over its 2.0L counterpart. The difference in power output between the two is at least 43 hp and 54 Nm of twists. Frankly, these numbers are substantial but on practical application, they aren’t enough to fault the car.

If the bigger 2.0L could spring the Mazda3 to speeds abruptly, the 1.5L took its time and worked harder, with the latter based on the sound the engine made. The pull wasn’t massive as well and tended to plateau slightly early. The traditional 6-speed torque converter automatic tranny worked like a charm, although there were a few times when it was hesitant to upshift. The difference in performance was only felt during spirited drives but on a regular commute, the 1.5L can already serve as a worthy steed.

That goes the same with the handling. The Mazda3 Elite was easy to maneuver and quite obedient on corners, which goes to show that Mazda’s G-Vectoring Control Plus wasn’t just any marketing blabber. With the gap in engine displacement also comes an improvement in fuel efficiency between the top and base variants. The Mazda3 Elite posted quite impressive numbers during our tests. On the highway, with the cruise control set at 90 km/h, we were able to get 23.3 km/L, while provincial drives at an average speed of 60 km/h returned 17.1 km/L. Want to go all out on a gorgeous sedan? Sure, going for the Mazda3 Premium variant is a decision you won’t regret, considering all the things you’ll get with this feature-heavy compact car.

But if you’re like most of our readers who are working on a budget, we can’t deny that the Mazda3 1.5 Elite sedan isn’t a bad deal at all. At P1,295,000, it offers great value and a full set of features that can put the range-toppers of its rivals to shame. And yes, even with its limited cabin space and conservative engine performance.

Value for money is relative to one’s buying power and the amount of the car that your money’s paying for. The Mazda3 shines brightly in this regard, even with its entry-level trim. 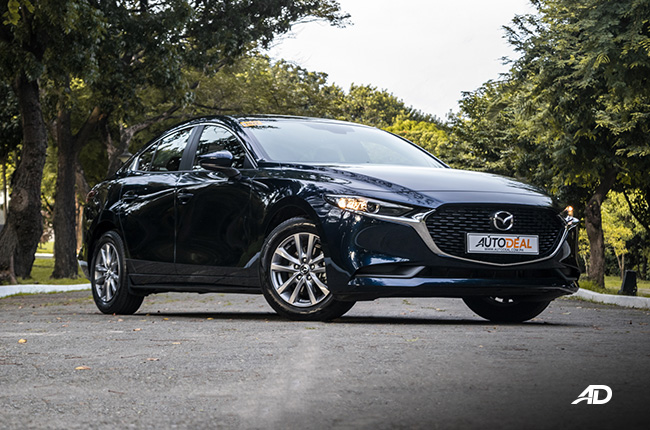