The MG HS was recently revealed to the public as the new flagship vehicle of the automaker. It brings with it a familiar yet at the same time unique styling to the vehicle and a host of new features that make it a competitive rival to those already established in the compact crossover segment. It also comes with a very attractive price tag that puts it in contention with the best that the subcompact crossover segment can offer.

That being said, MG Philippines gave us a bit of time with the brand new crossover SUV so we could feel it out and take it for a quick spin around a private subdivision. Here is what we think about the MG HS during our quick first impressions of the vehicle. 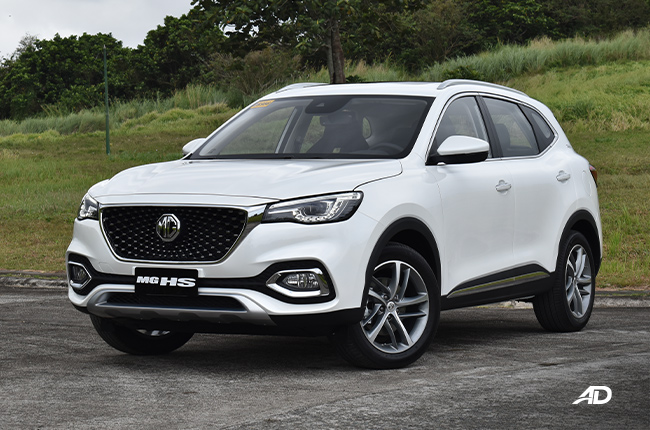 Starting with the exterior, the MG HS gives us a much larger version of the MG ZS. They share a few similar design cues such as the large grille and sleek headlights, but aside from this, the body of the HS is wide and more rounded compared to its much smaller sibling. This theme of a smooth and sophisticated look continues with the rest of the vehicle and extends to the rear.

At the back, the HS comes with a sleek rear to match its front. It does have a few styling similarities to the certain European crossover but it works to the benefit of the vehicle. Overall a stylish design especially as it comes with LED lighting all around. Premium is what the new MG HS aims for, both for exterior and interior. On the inside, the 5-seater crossover comes with leather and soft-touch plastics all around. Compared to its other stablemates, you can tell that the automaker went above and beyond with the choice of materials. Everything feels like it is made with high-quality plastics and other choice materials.

The seats are comfortable and supportive, but at the same time give off a sporty vibe to them. This is evident in the bucket seat-like design that comes with the word “trophy” embossed on it. The HS also comes with power seats which makes it easy to get into your preferred driving position amongst other things. The interior space is also good with more than enough knee and headroom to go around in the second row. Charging ports are also plentiful which is good for the rear passengers. 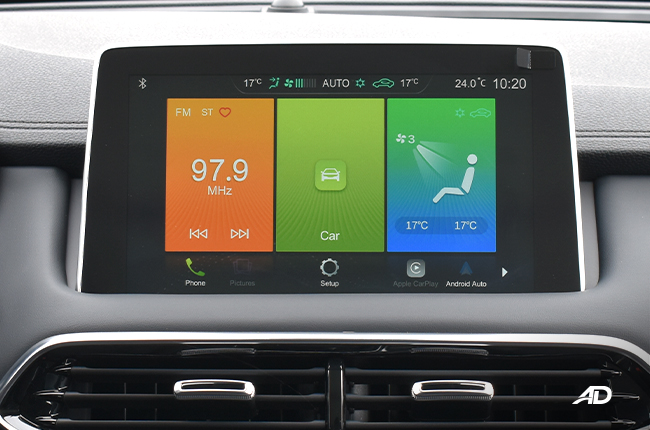 The MG HS packs a substantial amount of tech. It starts with the 10-inch infotainment system which comes with Apple CarPlay and Android Auto. It also comes with a 12.3-inch virtual driver information center which displays all the information you need to know about the car. It also displays the various drive modes you can shift to as well. Aside from this it also comes with a power liftgate which can be adjusted to open at different angles. Under the hood, the MG HS packs a turbocharged 1.5-liter 4-cylinder gasoline engine. It dishes out 166 and 250 Nm of torque. It is mated to a 7-speed TST gearbox which is MG’s way of saying it comes with a DCT. Overall shifting and power delivery are great which are more than enough to get the 5-seater crossover up to speed fairly quickly. There is one slight quirk, however, that we will talk about later. With all things considered, the transmission does a great job of doing what you ask it to do and delivers smooth shifting all while keeping the revs low for fuel-efficiency. With our limited time with the MG HS, we were only able to take it for a quick stroll around a private village. During that time we were able to find a few quirks with the car. While it gave a very pliant and comfortable ride its transmission was a bit slow to act especially if you are trying to maneuver the vehicle in a tight space. It takes a while for the transmission to “bite” and get the car moving especially if you are shifting from drive to reverse and vice versa. That being said, we the car does get moving the shifts are smooth and crisp without any noticeable jolts.

One thing to note is that we didn’t get to test the manual mode of the transmission or its supersport model. After all, we were confined to a subdivision and we weren’t able to get it up to highway speeds. We will get back to you on that once we get a review unit.

Overall the MG HS looks to be a great crossover, especially for its price point of between P1.1 to P1.2 million. While it does have its initial quirks the crossover makes up for it with the feature set that it carries amongst other great traits that it has. As we only had limited time with the vehicle, we can’t answer the questions about its fuel efficiency and its handling at higher speeds, but do stay tuned for our review of that coming out soon.