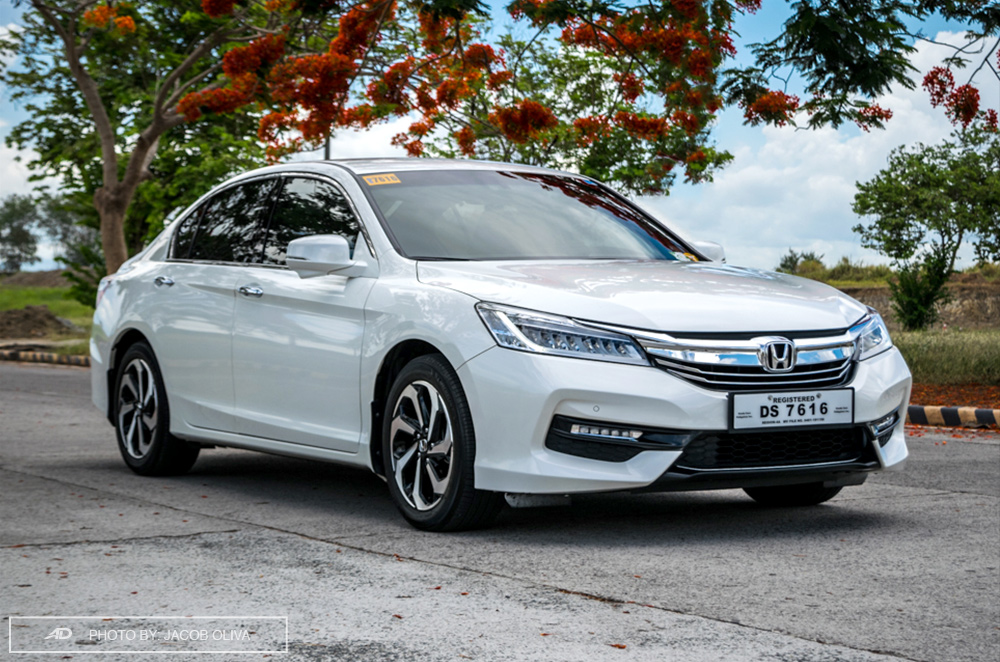 Let’s state the obvious: the population of midsize sedans on the streets is dwindling down. Maybe it’s because of the popularity of smaller (and more affordable) cars, or the tendency of people to choose SUVs and crossovers over similarly-priced executive sedans. It’s all about practicality, really.

But, the segment is still surviving, and among the remaining nameplates is the Honda Accord 2.4 S Navi. Frankly, it’s among those cars that need an update, together with the Toyota Camry and Subaru Legacy. With its aging design, is the Accord still a viable choice against the lot of choices in the market?

Performance
Engine Output (HP), Acceleration, Transmission, Handling 4.0/5
Design
Exterior & Interior Design, Quality, Fit and Finish, Ergonomics 3.5/5
Ride Comfort
Cabin Comfort, Suspension, NVH Insulation 4.0/5
Safety and Technology
Convenience Technologies, Active and Passive Safety Features 4.0/5
Value for Money
Amount of the vehicle you get for the price, Fuel Efficiency 4.0/5
What You Will Like
What You Won't Like
How We Do Our Reviews 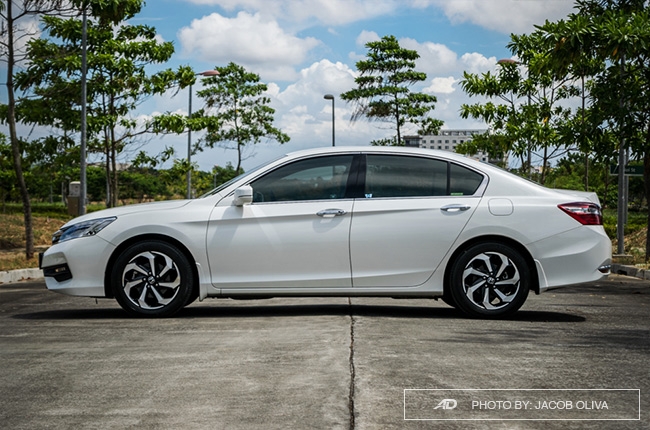 Yes, the Accord is at disadvantage when talking about years, but its design has aged nicely. It’s a car that you’ll never get tired of seeing on the road, and can still be worthy to be lined up with the rest of Honda’s range.

The chiseled hood and wide stance up front are great, crowned with a solid wing grille and meshed lower grille that add character to the car’s fascia. The shower of LED lights from its refresh a few years back never gets old, most specially the daytime running lights that underline the sharp headlamps. 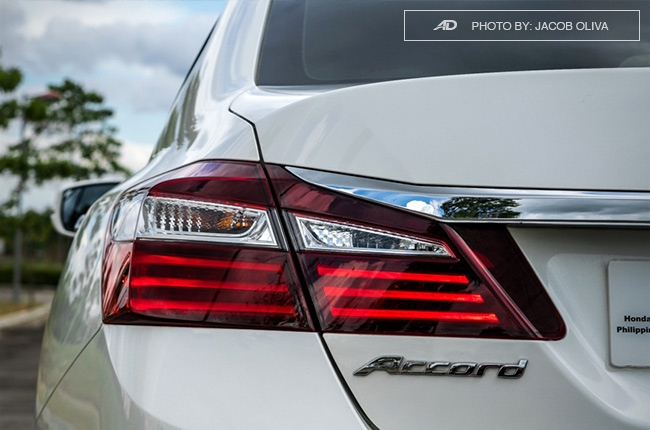 While the front end is working well for the Accord, we’re on the fence when it comes to its side profile because of its top-heavy shape. It isn’t that bad, but it certainly not the sleekest look out there. Its saving grace are the sharply-designed 17-inch alloy wheels, but would have been a lot better if it’s the 18-inch rims found on the 3.5 SV.

The rear-end, on the other hand, looks wide as well, which works for the car as it exhumes stability and rigidness. Overall, the Accord has a generous amount of chrome from the front clip up to the rear end, which is common among the midsize sedans, so we’ll give that a pass. 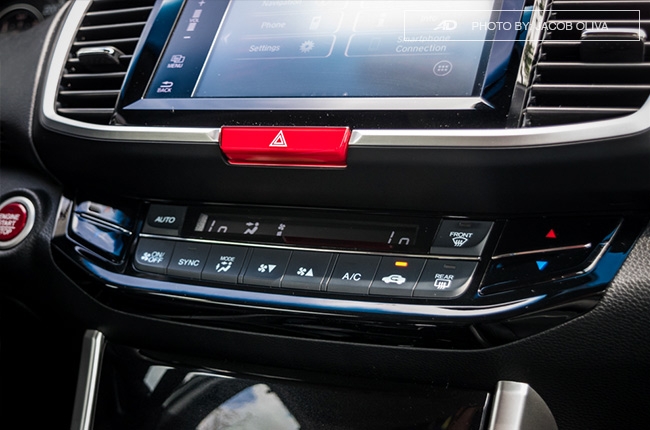 The Accord’s cabin is where it gets interesting. It’s as if the car hadn’t been aging, with a black-on-black color theme to go with dark wood accents, some shiny soft-touch plastics, and three digital displays. It’s like Ian Veneracion – a tito, but a good-looking tito, nonetheless. One that can still sport skinny jeans and colorful printed shirts.

The interior is also showered with a good amount of leather that feels nice to the touch. I also like the touch of wood on the steering wheel as it gives a plush appeal to the vehicle. Although, the analog gauge clusters really need an update; good thing the digital display on top of the dashboard is easy on the eyes. The easy-to-reach buttons and controls are well-appreciated, especially the layout of the steering wheel audio, call, and cruise control buttons. It isn’t cluttered unlike in some cars. The infotainment system looks updated, too, similar to that of the 10th generation Civic and the CR-V. I really like how seamless you can connect your smartphone to it via Bluetooth, or through USB with its Apple CarPlay capabilities for iPhone users. And yes, it has Navi, just in case your navigational apps don’t work due to bad data connection. The six speakers could have been better, though.

The soft leather front seats, including the passenger’s, are power-adjustable, albeit, the buttons for the passenger side is oddly-placed at the left side of backrest. Nevertheless, the seats are comfortable for both front occupants, something I appreciate when driving through long hours of traffic. 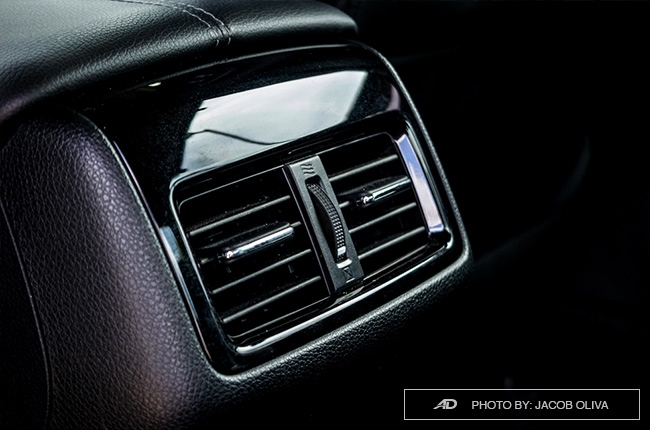 As you would expect from an executive sedan, the rear end has generous amount of space to couple with the amount of comfort it can offer. It has rear air-conditioning vents, foldable center armrest with cupholders and audio controls, pull-up privacy shades, and motorized rear shade. The trunk space is, of course, plenty.

The Accord’s ride quality is commendable as it’s tuned between being sporty (for minimal body roll) and soft (to absorb road imperfections). The noise levels are also muted inside. It works great for this car, and very fitting as midsize sedans are meant to be really comfortable. 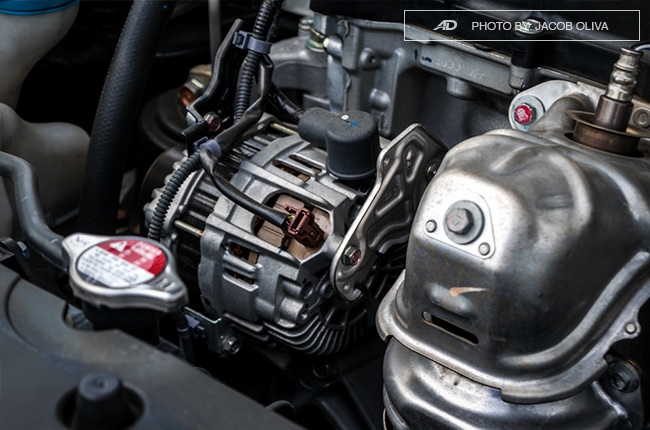 If getting a chauffeur is an obvious choice because of the comfort the Accord can offer, wait until you get to drive the midsize car. Even with its four-cylinder 2.4L i-VTEC engine (as opposed to the 3.5L V6), the Accord can pack a punch, whether you’re alone or when filled with passengers. The 175 horses on paper translates well on the road, along with its 226 Nm of pulling power. There was never a time that I wanted more grunt, which can also be attributed to how quickly its five-speed automatic gearbox can send the power to the front wheels.

Of course, it’s not as powerful as a sports car, but for an executive sedan, the Accord 2.4 is a winner. From standstill, it reacts quickly to accelerator inputs, while indecisiveness amidst varying traffic conditions is a welcome feat for the engine. The brakes are crisp and bite sharply, even with the media test units age. The forward driving visibility is okay, but it could have been better if there are corner windows by the A-pillar for less blind spot, just like in some other Hondas. Nevertheless, the Accord is still painless to maneuver, even at night. Turning at dark corners are safer with the car’s active cornering lights, and parking at tight spots are easier with its parking sensors and reverse camera.

At speeds, the Accord handles great with minimal understeer. The steering wheel also feels heavy, so cornering is more accurate. Now, my favorite feature of the Accord is the camera under the right side mirror, which activates when turning to the right. This serves as the blind sport monitor, pretty effective against careless motorcycle riders. Sounds familiar? This is the same feature found in the 2018 CR-V. 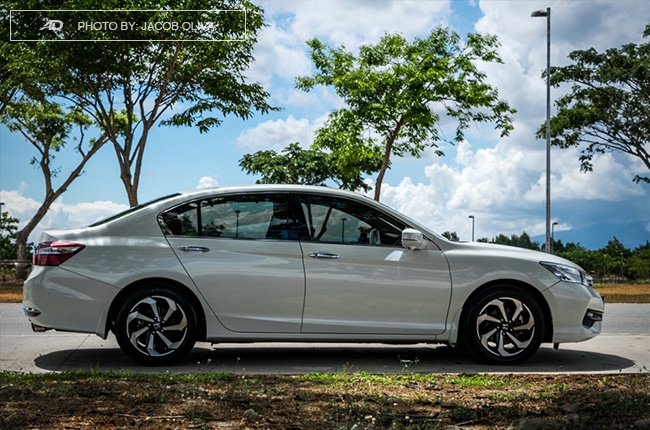 Now, fuel-efficiency isn’t the best trait of the Accord, as crawling city drives averaging 15 km/h registered 6.4 km/L, while faster strides at 60 km/h read 10.2 km/L. Highway stints isn’t too great as well, with 16.1 km/L reading while running steadily at 90 km/h. But we doubt you’ll care about fuel costs if you’re in the market of executive sedans, so, there’s that. Just in case, there’s a green ECON button to use. Clearly, the Honda Accord isn’t for everybody. But if you’re among those who are eyeing to get an executive car for your dad or for a company, it still is a solid choice. Plus, priced at P1,884,000.00, it’s the most affordable among its mentioned Japanese rivals. It’s a great car for the price it asks, although, it may not bode well if it was to go up against the recently launched all-new Chevrolet Malibu.

But I reckon, in its own way, the Accord can still go head-to-head with the American midsize sedan, especially when it comes to pricing and, yes, I dare say it, aesthetics. 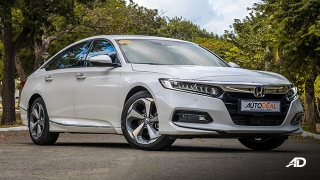