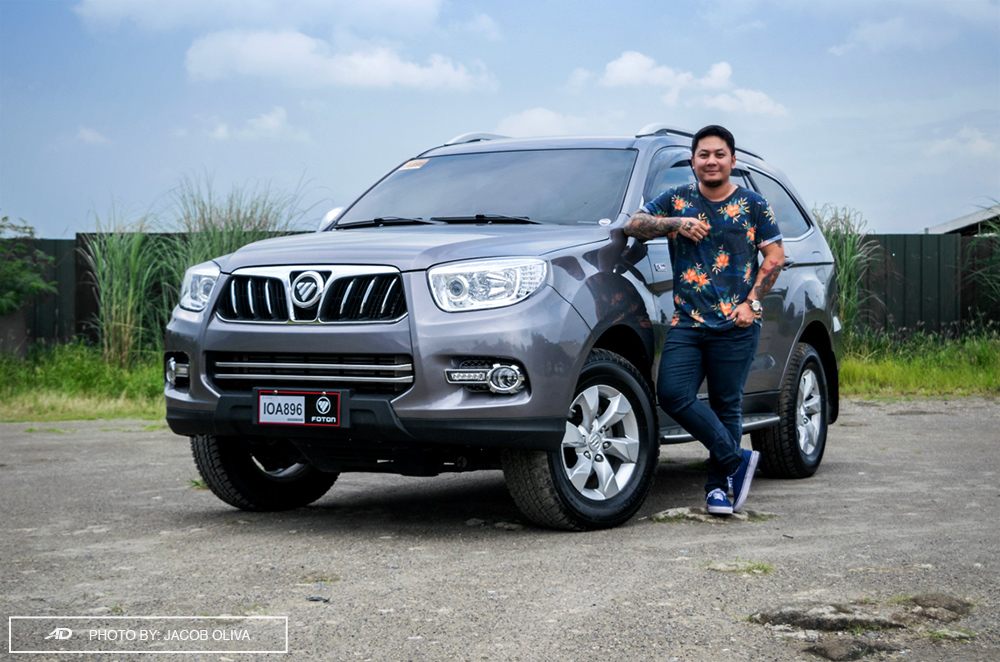 Let’s face it – the words “Made in China” are not popular, especially with some substandard offerings that somehow created the stigma on all things produced from the country, specifically automobiles. Compared to the excellence in quality that Japan and Germany are known for, Chinese car manufacturers are still challenged to prove their presence in the industry.

Performance
Engine Output (HP), Acceleration, Transmission, Handling 4.0/5
Design
Exterior & Interior Design, Quality, Fit and Finish, Ergonomics 3.0/5
Ride Comfort
Cabin Comfort, Suspension, NVH Insulation 4.0/5
Safety and Technology
Convenience Technologies, Active and Passive Safety Features 3.0/5
Value for Money
Amount of the vehicle you get for the price, Fuel Efficiency 3.5/5
What You Will Like
What You Won't Like
How We Do Our Reviews
Related: The modern-day Chinese cars in the Philippines

In the Philippines, Chinese automakers have been operating within the commercial vehicle segment for quite some time. Some brands like Foton Philippines, however, braved the local passenger market through its midsize SUV offering, the Toplander (also known as Sauvana in the global market). It’s a bold move, considering the stigma about Chinese cars, so we drove one for several days to see what the Toplander could offer. 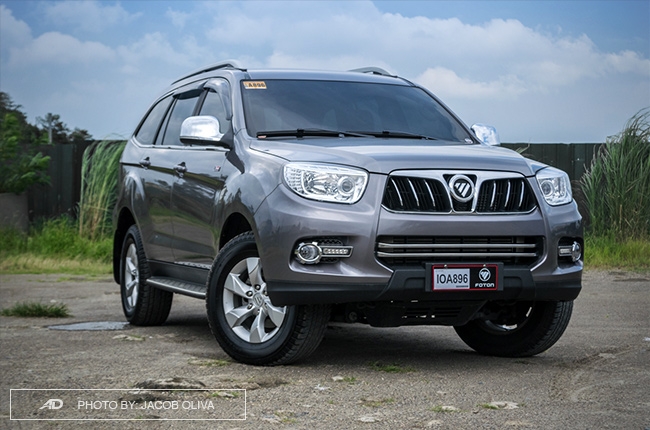 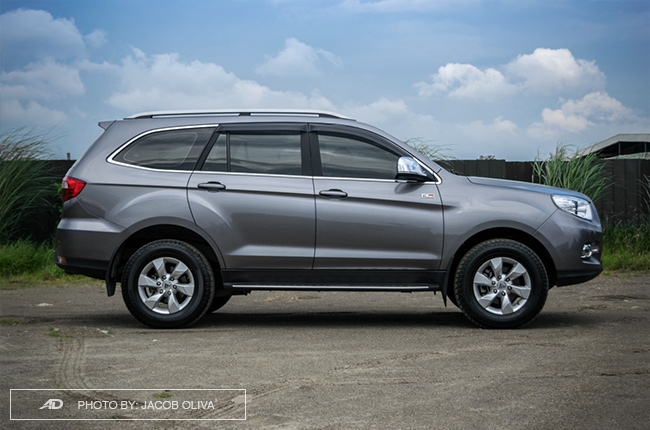 Design-wise, the Foton Toplander EX 4x2 AT follows what other mainstream brands have been doing for years – authoritative, beefy fender flares, straight-forward character lines, and showers of chrome. It’s not a bad thing, as it allows the Toplander to blend into the market filled with Japanese and American nameplates. The generous amount of chrome is something left to be desired with, though.

What sets the Toplander apart is its size. At 2,135mm, it’s the widest among the more popular bunch, particularly the Ford Everest and Mitsubishi Montero Sport, with a difference of up to 300mm (11.8 inches). The Chinese contender is also the tallest at 1,870mm. If you like big cars, this is good news for you. There’s a bit of a problem, though – the Toplander has the shortest wheelbase; we’ll get to that later. 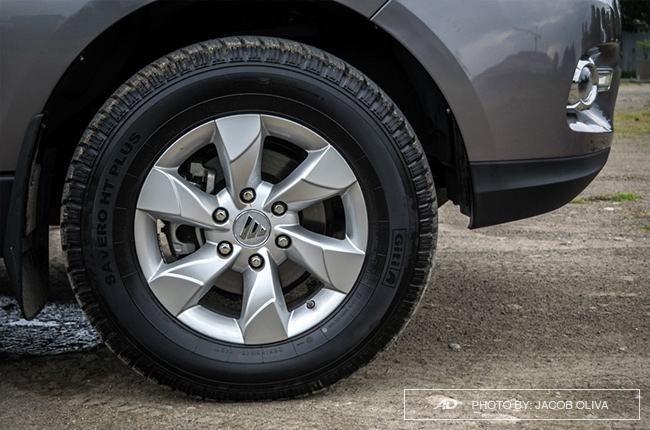 As the most affordable midsize SUV in the market today, the Toplander has modern SUV essentials such as daytime running lights, fog lights, halogen headlamps, mirror-mounted turning lights, roof rails, and step-board. Everything behaves like clockwork, but the dotted rubber on the step-board could have been better if it’s just the regular ribbed rubber matting. Such dotted design is a bit slippery, which actually happened to me while entering the car one rainy morning.

Foton did a great job in keeping the panels gaps uniform throughout the vehicle, which spells good quality in our language. The overall exterior design is something I appreciate. It looks strong and sturdy; it makes you take a good second look, urging you to ask whether it is really a China-made car. 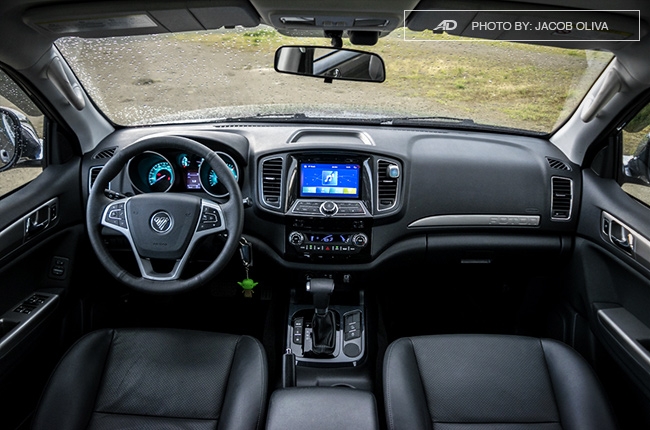 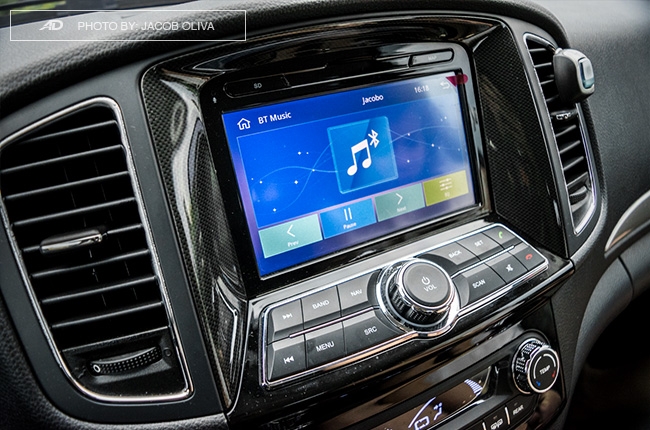 Inside, the Toplander could go head-to-head with its Japanese rivals at first glance. There’s an effort to mask the plastics on the dashboard with its matte finish, as well as the piano black accents and carbon fiber prints around the gear shifter and the infotainment system. I’m not a fan of these accents but they’re far better than seeing hard plastics.

The buttons on the dashboard are well-organized and situated in places where they should be. Some buttons, though, like the trip computer reset and steering wheel audio controls, could be improved for better feedback. I also wish Foton could lessen the blank buttons found in the vehicle. They’re as useless as ‘ueue’ in the word queue. Also, the electronic door locks are centralized but only the driver can lock or unlock them. You would need to ask the person behind the wheel to unlock the doors for you before alighting the vehicle. 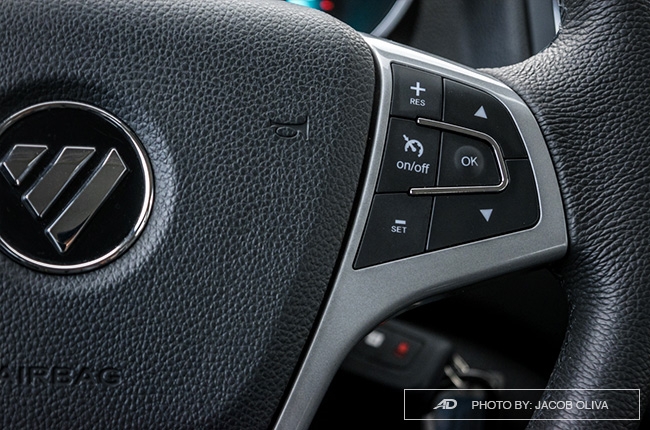 The touchscreen infotainment system, which has a similar interface to Nokia phones and doubles as the display for the reverse camera, works well in pairing to smartphones via Bluetooth with a mirroring option. The latter is exclusive for Android phones, though, so you would need to settle for the former if you’re an Apple user. Good thing, the six-speaker setup sounds decent to my taste.

As for space, the Toplander is gifted with a lot for the front and second rows. Wiggle room is also plenty, brought about by the SUV’s class-leading width. The only problem, however, is the third row’s legroom. As this SUV is rather short in overall length and wheelbase length when compared to its rivals, taller individuals (5’6” and above) might want to fight for the second row for comfortable seating. If only the second row could be slid forward, that would be great. 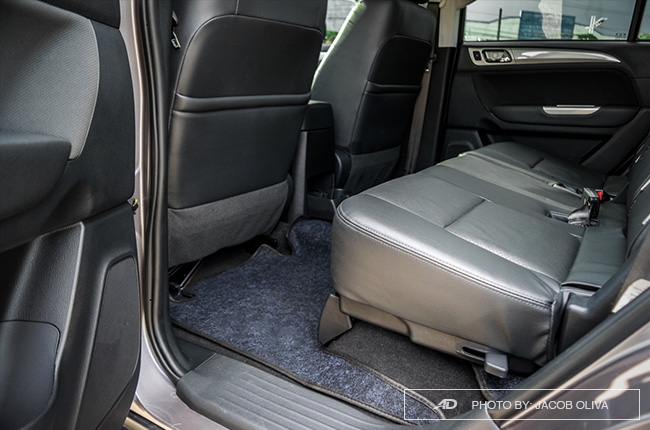 But if you’ll use the last row for cargo-hauling, you can fold the seats flat the same way you do in a Montero Sport where you pop the seat forward and fold the backrests. You will have to remove the headrests first for you to be able to do this. With that, the flat cargo bay is a delight to see as it can fit up to eight medium-sized to large-sized luggage (yes, we tested). Airport duties, anyone?

Finally, there are other few qualms for me inside the Toplander – the cruise control main switch doesn’t tell you if the system is on or not; no A/C vents for the second row; third row A/C vents are only situated on the right side (sorry, left-side passenger); all the seats are clad with leather but I wish they’re as soft as they look; and finding the ideal driving position is challenging because the driving pedals are near the driver. Without telescopic steering wheel adjustment, the latter is a problem for people with short arms, like me. Yes, I know, I wish for a lot of little things, but the Toplander has something that I am really glad it came with: the 2.8L turbocharged Cummins diesel engine under the hood. This U.S.-based brand is a staple name in the trucking industry, and its reputation when it comes to reliability is unrivaled.

But that’s not all. The Toplander also comes with a six-speed automatic transmission from Daimler. Yes, Daimler, which is synonymous with Mercedes-Benz. With these brands residing inside the Toplander’s bonnet, you’re assured that all the dirty work is in the good hands of world-renowned names.

The joy brought about by the engine isn’t just in the brand names. Granted, the Toplander only produces 161 hp and 360 Nm of torque, which are lower by a hair compared to the mentioned rivals. However, those are just on paper. On the actual drive, those figures were more than adequate and this SUV behaved just like how you wanted a diesel-powered vehicle to be. Accelerator inputs were easily felt, and the transmission was quick to send the power to the rear wheels without noticeable delay. Shifting was also precise. Never mind the noisy engine or the odd-heaving sound it makes; the Toplander was one powerful vehicle to drive. I can attest to that as I went to the airport with eight heavy luggage and five people onboard. It was painless.

As with most midsize SUVs, except the Everest, the Toplander’s steering was heavy. That’s a welcome feat for stable fast runs, but it’s challenging when maneuvering through tight spaces. Handling can also be fine-tuned a bit more and the brake pedals can be adjusted to bite a little early.

Ride comfort inside the Toplander was also commendable, whether you’re the driver or one of the six passengers. The suspension was tuned to absorb dilapidated roads effectively, without inflicting the impact to the vehicle’s occupants. NVH isolation was sufficient, but could still be improved. Another notable feat is the Toplander’s fuel economy. Highway stints at 90 km/h average read 14.8 km/L, while in-city traffic at around 15 km/h registered 6.8 km/L. Do take note, though, that these readings were taken with only two people inside.

With all things considered, the Foton Toplander isn’t the perfect vehicle. It has a lot to improve on in terms of features, quality of materials, and ergonomics. But, for a brand that’s trying to break away from the usual impression for something that’s made in China, the Toplander, I say, is a great product to start with. It’s a promising one, but admittedly, it’s a little too early to ask for P1,488,000 for this range-topper EX 4x2 AT. Such a dauntless move, considering how its rivals are priced these days.

With this car trying to get its place in the market, it’s a reminder that it won’t be long until Chinese-made vehicles flourish among mainstream brands, just like how South Korean cars broke free from its own stigma years ago.