The appearance of the all-new Suzuki Dzire during the 2018 Manila International Auto Show (MIAS) in April was quite intriguing. Aside from dropping “Swift” in its nameplate, Suzuki Philippines (SPH) introduced the Auto Gear Shift (AGS) technology that comes with the next-generation subcompact sedan. It was briefly explained during the event, but it was only made in passing. There were no follow up releases about the said technology, nor test drives to let us motoring media figure out what this AGS is all about.

That’s why when SPH invited us for an Editors’ Test Drive of the 2018 Dzire, we can’t help but say yes because we’re really curious as to what the all-new car can offer, especially the AGS technology.

Apparently, there were a lot, and from that test drive, we got the 10 things that make the all-new Dzire a value-packed subcompact sedan.

1. It looks more sedan than its predecessor. 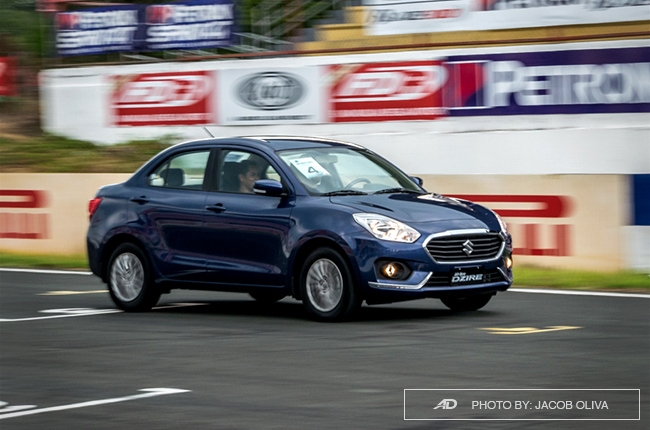 The 2018 Dzire’s all-new design is a far cry from the outgoing model, sporting a huge polygonal grille, muscular bonnet, and defined character lines on the side to match the 15-inch multi-spoke alloy wheels. However, the biggest changes are found in its overall form. With the steeper A-pillar and inclined C-pillar, the 2018 Dzire’s new design makes it a true sedan, unlike its previous “hatchback with a trunk” form. Looks a lot better than its rivals, if you ask us. Aside from being bigger than its predecessor, the 2018 Dzire is at the advantage when compared to its competitors in the market like the Mitsubishi Mirage G4 and Honda Brio Amaze. The Dzire is in between those two cars when it comes to overall length at 3,995mm and wheelbase at 2,450mm, while it’s as tall as the Mirage G4 at 1,515mm.

However, the overall width is at 1,735mm, which is at least 65-mm wider than the mentioned two cars. This translates to more wiggle room inside – an important trait for a rather small vehicle. It’s even wider than a car above its segment, the Toyota Vios.

3. Cabin is simple and functional, with tad touch of sportiness. The Dzire’s cabin is straightforward and undistracted. It’s full of straight lines and simple materials that are soft to the touch. What we appreciate greatly are the cabin controls, with every knobs and buttons within arms’ reach. The gear shift knob is also conveniently positioned low in a manner that the driver will be able to effortlessly switch gears when in manual mode (more on this later).

Lastly, Suzuki’s newest subcompact is surprisingly equipped with a flat-bottom steering wheel with audio control buttons, which gives it a sporty look. Well, kind of, but it’s the first to have this in its class. Both the Mirage G4 and Brio Amaze have touchscreen LCD infotainment (6.75-inch and 6.2-inch, respectively) with navigational features, but the Dzire has the biggest: a seven-inch multimedia system. The graphics on the display also look good, and it doesn’t lag while being tapped or swiped. The speakers sound decent, too, even at the rear seats. Speaking of rear seats, those who are seated at the back won’t only be blessed with bigger wiggle room: there are also rear air-conditioning vents available for added comfort. As a bonus, there’s also a 12-V power outlet so rear passengers can also charge their phones. These things are a first in the Dzire’s segment.

6. Auto Gear Shift (AGS) technology is a trip, and different from a conventional automatic transmission. One of the highlights of the all-new Suzuki Dzire is the five-speed Auto Gear Shift (AGS) technology, which roughly translates to automated manual transmission. AGS is basically a manual transmission (MT) equipped with an intelligent actuator that automates the gear shifting for you. It combines the fuel-efficiency of driving a stick and the convenience of driving an automatic transmission (AT).

Related: Here are the different types of Automatic Transmissions

Now, to differentiate the two, AGS still uses a mechanical clutch to transmit the torque (just like in MTs), as opposed to the torque converter that conventional ATs use. There is more power loss using the torque converter, which AGS aims to remove. It’s just that in AGS, you don’t have a clutch pedal; the actuator knows when to change the gear for you and does so effectively.

7. It almost drives like a conventional AT, albeit, a little different. On the actual drive, the AGS-equipped Dzire drove like a conventional AT, meaning you can drive without shifting gears and having to lift your foot off of the accelerator. The only difference is that even when in D mode, you can feel the switching between gears; there’s a subtle bump, but it wasn’t bothersome at all.

If you don’t want to feel the slight bump when gear shifting, you can lift your foot from the accelerator when you feel that you have reached the right RPM (again, just like in MTs) and the actuators will do the shifting in the background. You can also use the manual mode, which works the same as when in D mode but you have to manually upshift (+) or downshift (-). When in D mode, the Dzire’s actuator does its magic and reacts instantaneously to varying accelerator inputs. It knows when you’re being aggressive with the accelerator and lets you reach high RPMs before switching. It can also downshift with minimal lag, even jumping from gear 5 to 3 when it’s needed.

With this, the full potential of the four-cylinder 1.2L K12M gasoline engine can be tapped at your disposal, while still having the option to save fuel when driving in a relaxed manner.

9. It has safety features that go with the AGS. Aside from the Dzire’s passive safety features like two front airbags, brake assist function, ISOFIX child seat anchors, and ABS with EBD, its AGS is also equipped with a fail-safe system that won’t let you switch from D to reverse while the vehicle is in motion.

The test drive marshal during the event was pretty confident about this feature, and told me to switch to reverse from D mode while running at around 60 km/h. Nothing happened, as expected. Pretty cool.

10. Admittedly pricier than the outgoing model, but still competitive within its segment. The Suzuki Dzire will have a price tag of P638,000 for its five-speed GL MT variant, while the top-of-the-line GL+ AGS will come in at P698,000. Yes, it’s a bit of a jump from the outgoing sub-P600K model, but when compared to the range-toppers of its competitors, it’s still the most affordable.

Best part is, SPH promises parts availability for 2018 Dzire and the new AGS system before it even reach the showrooms by June 27, 2018, together with its hatchback brother, the Swift.