The subcompact sedan segment is getting more competitive nowadays. Over the years, these small wonders have not only grown in terms of their standard dimensions, but rather each competitor in this segment boasts a lot in terms of practicality and other convenience features. Take the Honda City as an example, now in its sixth generation, this subcompact sedan still sits as one of the Japanese brand’s best-selling models in the lineup. Perhaps, many customers are enticed by its strong value proposition, as the City does give you quite a lot for less.

The segment is currently flooded with options, from the veterans like the Toyota Vios and the Hyundai Accent to rookies like the MG 5 and Volkswagen Santana. The Honda City continues to stand strong, while there are indeed a lot of things to love about it, and we’ve managed to come up with 7 things that make this subcompact car a great value-for-money sedan. So without further ado, let’s proceed, shall we?

Looks that pay homage to its larger stablemates Undoubtedly, the all-new Honda City does look like a shrunken Civic especially when you look at the front clip. The overall exterior treatment varies per variant, from the rims to the number of chrome embellishments, and other sporty reinforcements. It’s a certified stunner, be it in its base, mid-tier, or range-topping form.

This subcompact sedan exhibits the right balance of clean looks and sportiness. While the RS does pack more attitude given the extensive makeover, the V and S trim still look good when compared to some of its competitors. Overall, there’s not much wow-factor to it but it’s just so pleasing to look at, plus, its design should age gracefully over time.

Space that goes beyond its segment One of the primary concerns consumers may have when buying a subcompact car is the amount of interior space it has. Good thing the Honda City packs more than enough space to carry five passengers comfortably. Unlike some of its competitors, the City is able to accommodate 3 adult occupants comfortably in the rear. Width isn’t that big of an issue. In fact, legroom and headroom are good enough for individuals standing by up to 6 feet in height. Many brands have been stepping up their game when it comes to infotainment systems, that includes Honda, with its all-new City now having an 8-inch touchscreen infotainment system that’s available on all variants except the base S MT which gets a more basic 2DIN radio. The more advanced touchscreen offers several connectivity options such as Apple CarPlay and Android Auto for seamless phone integration. Many modern cars nowadays carry this feature, and it’s good to see that even smaller options like the Honda City are now available with this.

Even the S trim packs a lot of standard goodies The Honda City is indeed a delightful treat even in its base form. The S variant can be had in either manual or automatic, whichever you choose, its level of standard equipment is quite impressive. On the outside, the two are much identical, from the 15-inch alloy wheels, to the chrome embellishments, and then to the body-colored door handles. Notably, it even gets daytime running lights (DRLs) and the same pair of gorgeous taillights that are found on higher trims. 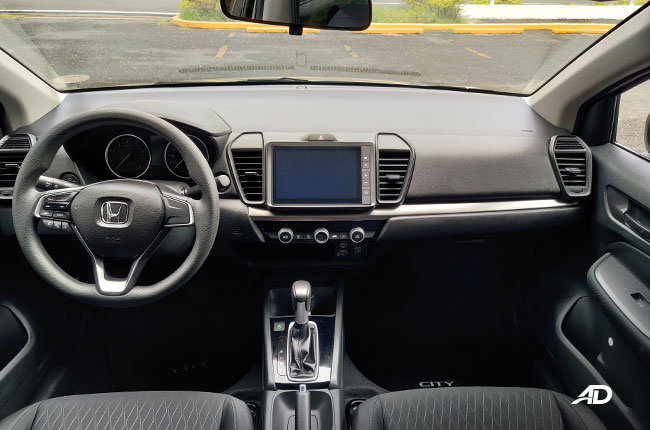 On the inside, both the 1.5 S MT and CVT come standard with steering-wheel-mounted audio controls, a manual climate control, and a push-start button coupled with a smart keyless entry. You can even get the glorious 8-inch touchscreen with Apple CarPlay and Android Auto on the S CVT variant. With that, it’s surprisingly well equipped for the price. considering that the City S variants starts at under a million.

Improved performance over its predecessor The all-new Honda City only has one engine option, and that is a 1.5-liter gasoline engine that puts out 119 hp and 145 Nm of torque. Notably, the 1 hp increase does mean a slightly improved performance for the City, but you get better performance throughout the entire rev range. Its mill can then be paired with either a 6-speed manual for the base S or a Continuously Variable Transmission (CVT). Noticeably, the City hits a little earlier, therefore, giving us ample pulling power that’s faster than before. More importantly, recent testing of the City RS allowed us to register 8.5 km/L in Metro Manila traffic, which is pretty good, while cruising along at about 90 to 100 km/h on the highway boosted its number to 14 km/L. Currently, the City range starts with the 1.5 S MT retailing at P848,000 while the 1.5 S CVT sits a bit higher at  P888,000. The mid-tier 1.5 V CVT, on the other hand is priced at P978,000 and lastly, the range-topping City 1.5 RS CVT retails at P1,058,000. It’s safe to say that each of these variants have that sulit factor that many buyers are looking for. In general the Honda City does stand strong in terms of value proposition and it’s definitely worthy of your hard earned money.