Lately, our inbox and social media pages are brimming with car comparo requests. As we sifted through, we found that many of you wanted to know which between the all-new models of the Mitsubishi Montero Sport and the Toyota Fortuner is the better SUV.

For this head-to-head battle, we’ve chosen the Montero Sport’s entry-level GLS 2.4 4x2 AT and the Fortuner’s mid-range 2.4 G 4x2 AT. Both do have some things in common like an almost similar price of just under P1.5-million; 2.4L turbo diesel engine; 4x2 drive system; and seating capacity. However, digging deeper into their specs reveals certain things that set them apart.

The Montero Sport presents an SRP of P1,500,000, while the Fortuner sells at P1,476,000. Looking at these figures, the Fortuner is a tad cheaper despite its mid-range status. But you have to take a look at the Montero Sport’s other details like what’s under the hood and within the cabin to get a good idea why it’s pricier by P24,000.

In this round though, it’s the Toyota Fortuner that takes the cake with a more attractive price tag. Although having similar engine sizes, the Montero Sport’s power plant is punchier at 181 hp vs. the 147 hp of the Fortuner. Moreover, it pulls its weight slightly better with its 430 Nm of torque as compared to the Fortuner’s 400 Nm.

When it comes to firepower under the hood, the Montero Sport clearly has the upper hand. 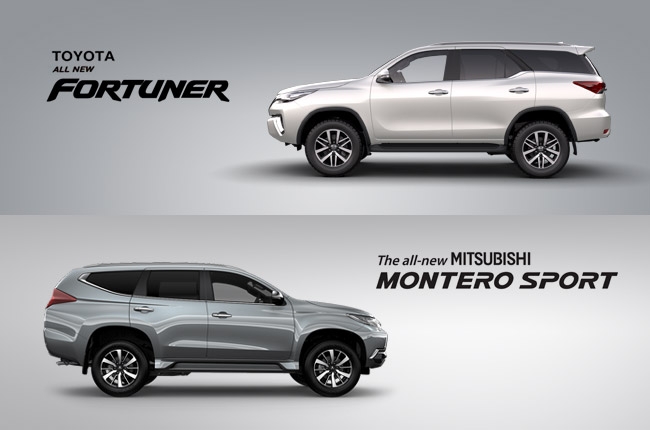 Given that both can accommodate 7 passengers with enough luggage space, the Fortuner has a slightly bigger appearance. It measures longer by 10 mm, wider by 40 mm, and taller by 30 mm. However, the Montero Sport comes with a much longer wheelbase at 2,800 mm vs. the Fortuner’s 2,750 mm.

This edge gives the Montero Sport a tiny bit more legroom and a reason to have a set of 18-inch rims (an inch bigger than the Fortuner’s) to highlight the longer wheelbase.

But these weren’t enough to win this round for Mitsubishi’s contender. The Toyota Fortuner has better dimensions. 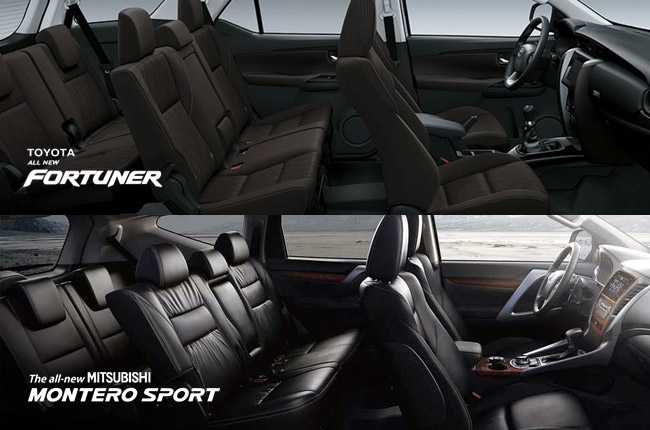 Occupants can have more fun onboard the Fortuner because of its 6.5-inch touch screen LCD system with iPod/Bluetooth connectivity and call function. It even support audio streaming so you can enjoy your online tunes while on transit.

However when it comes to comfort, the Montero Sport has a slight lead with a dual-zone automatic control A/C. In fairness, the Fortuner’s manual A/C does a good job, too.

Since both have fabric seats as well as configurable 2nd and 3rd row seats to go along with the above-mentioned amenities, they both receive equal merits here.

In the safety department, the Toyota Fortuner stands out with an additional set of airbags for the knees. Its ABS with EBD also comes with brake assist to help the driver when extra stopping power is needed. But the Montero Sport’s arsenal of features didn’t lag too far behind either. Though there are no knee airbags, it can still provide protection for its occupants. Also, take note that the Montero Sport here is the entry-level variant. More features can be found if you opt for the upper variants. To put things in perspective, we pit the enrty-level Montero Sport to the mid-variant of the Fortuner base on its price.

Both Japanese SUVs exchange blows so closely in all aspects. If you want added power, the Montero Sport has more on tap. But if you’re particular about safety features, you might want to consider the Fortuner.

Though the Toyota Fortuner offers more interior goodies for its price, the Mitsubishi Montero Sport’s amenities are noteworthy as well.