Sedans like the Camry, Accord, and Mazda6 are commonly referred to as 'executive sedans' due to their features, price point, and the people who can afford them. Not to say they cannot be family cars, it's just that their overall package attracts people of certain status.

The scene changed though when the 2019 Mazda6 was launched. Traditionally, these cars are meant for the executive to be at the back while a chauffeur takes them around. Open the rear doors of the Mazda6 and you'll be surprised by the lack of amenities at the backseat. The two air-conditioning vents and the USB slot in the center console are the only features for the rear passenger, with all toys given to the driver. Clearly, Mazda wants you to be in charge of your car but on this day of carmaggedon traffic, is it sane to do so?

The Mazda6 (and my patience) were put to test as I drove it in two long drives. The first was Makati to Sta. Rosa and back to QC. This was a five-hour drive thanks to the construction on SLEX northbound. Then on a Sunday, I drove it from QC to Sto. Tomas, Batangas, and then to several points in Metro Manila for a total of 10 hours on the road that day. For an experience that should be tiring, both drives were very tolerable for the body. It was easy to find the perfect driving position thanks to the powered driver's seat and the tilt and telescopic steering wheel. I had the steering wheel pulled back, and my seat a bit farther than usual, in order to have a more relaxed angle on my right foot. It also helped that the pedals aren't too far apart and just has the right height difference between them so moving back and forth doesn't require too much work and is easier for the ankle.

The steering wheel is far from being light, and yet it's the best I've used so far. It's steady on the highway but moves at will when you need it to, and doesn't require much correction even at tight turns. Effortless is not an exaggeration to describe it.

The physical comfort, combined with the gnarly 2.5L Skyactiv-G Turbo engine, a 6-speed automatic transmission that's always on point, and tech inclusions like Apple CarPlay and Android Auto, make a compelling case on why executives should own and drive the Mazda6 themselves. 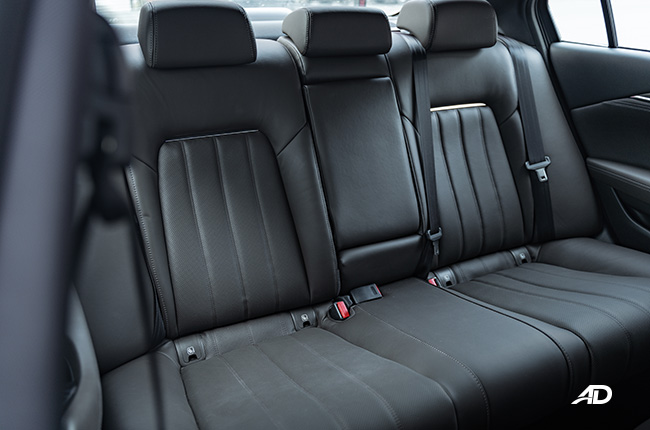 In a way, it makes sense. While it's a symbol of power to have someone open the door for you while you get out all smooth, there's a certain dominance in getting out of the driver's seat and tugging your coat before you throw the keys to the valet.

In the end, it all comes down to choice. If you've already made it, you might want to relax at the back. For those who are driven to be 'it', the Mazda6 will not fail in helping you become one.