The Changan CS75 Plus is a compact crossover with a chip on its shoulder. It’s out to prove that it can go toe-to-toe with offerings from the best brands out there, and what’s the best today if not the Ford Territory? It has sold like hotcakes since its launch in the Philippines, offering consumers a seemingly unbeatable combination of looks and features at a reasonable price.

Which of these loaded vehicles is the one to buy today? That’s what we aim to find out in this edition of Head to Head. Looking at these crossovers side by side, you might notice that one looks more aggressive and the other looks sleeker. That’s because the Changan CS75 Plus is intentionally designed to look young and sporty. It’s evident in the highly sculpted front fascia and the smattering of red trims throughout its exterior. The CS75 Plus boasts LED lighting for all but the front and rear fog lamps. At the sides, it features stylish, 18-inch alloy wheels that match the exterior design well. The rear gets full-width taillights, twin high-mount stop lamps, an integrated spoiler, and a shark’s fin antenna. The CS75 Plus could be among the better-looking compact crossovers out there today, especially if you’re looking for something that’s out of the norm. 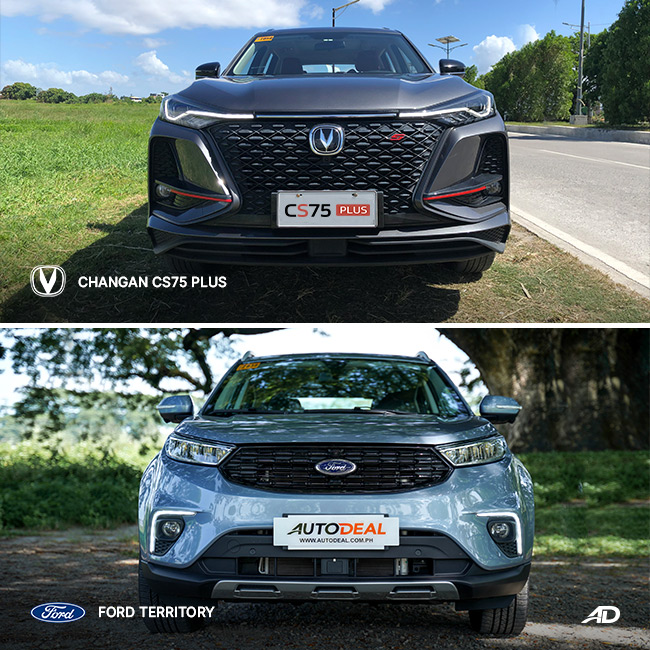 Meanwhile, the Ford Territory has been praised for its handsome looks since it debuted. Ford’s signature grille design is present here, complemented by LED lighting, except for the fog lamps, which are halogen. On the Titanium model, there are 18-inch, two-tone alloy wheels, the same size as the CS75 Plus. The rear is also well-equipped with an integrated spoiler and a massive rear bumper. The Territory is a bestseller for many reasons, but among them has to be because of how good it looks to many buyers.

The CS75 Plus will appeal to a crowd in the market for a sportier and more aggressive design, while the Territory’s design speaks to a wider audience. While both are modern-looking, the former is youthful and the latter is more statesmanlike. For this category, we think it’s a matter of taste, so we’re awarding a tie. Both compact crossovers feature loaded interiors with modern amenities and premium-like styling. On the CS75 Plus, it manifests as a red-and-black leather interior with a European-inspired cabin layout. You’ll immediately notice the floating twin-screen layout made to look like one piece of large glass. Pair that with a sporty, flat-bottom steering wheel and you’re off to a good start.

Although the predominantly red upholstery might not be to everyone’s liking, the seats are comfortable enough for five, average-sized Filipinos. The driver’s seat is six-way power adjustable, and the steering wheel is tilt-and-telescopic adjustable. The center controls come in the form of a capacitive touch panel, so button fans may come out disappointed. There’s single-zone climate control, with rear air vents for the back passengers. There’s also three USB ports, two at the front and one at the rear.

The panoramic sunroof on the CS75 Plus also provides a better overall interior experience. In terms of tech, the CS75 Plus features a seven-inch LCD driver’s display, offering rich information and selectable themes to boot. There’s also a 12-inch touchscreen infotainment system with Bluetooth and USB connectivity. Apple CarPlay and Android Auto are notably absent and might turn some buyers off. The sound from the six-speaker system isn’t particularly of note, but it gets fairly loud. On the inside of the Ford Territory, things get a bit more simplistic but not any less impressive. It’s still a modern cabin, packed with a mix of leather, hard plastics, and wood-style trims. The Titanium variant also boasts ambient lighting—something the CS75 Plus doesn’t have. Ford equipped the Territory with well-bolstered, perforated leather seats all around, and a 10-way power-adjustable driver’s seat is available on the higher model. The panoramic sunroof is also more expansive and well-built than what’s on the CS75 Plus. While both are motorized, the Territory’s sunshade cover is made of solid material and is likely built to last.

As previously mentioned, the Territory packs a lot of tech toys—more than most in its segment and price point. It starts with the massive, 10-inch digital instrument display available on the Titanium model. It looks bright and crisp and shows all the information you need at a glance. Nex is the 10-inch touchscreen infotainment unit, of course with wireless Apple CarPlay and wired Android Auto. There’s also wireless charging for keeping your smartphone powered on the go. The eight speakers put it above the CS75 Plus’ six, so music naturally sounds fuller and more substantial.

The CS75 Plus has a lot of attractive features, but not as many as the Territory. The tech on the Territory feels more polished, although the CS75 Plus is admittedly not far behind. Still, smartphone connectivity feels like a must-have in this age of connected cars, and the lack of it on the CS75 Plus will likely disappoint many. If you don’t buy your cars based on that, however, Changan’s compact crossover remains a viable choice. As for the interior design, the Changan looks gorgeous with its highly stylized cabin, but like its exterior, the Territory’s interior likely appeals to a wider range of buyers. There’s a clear winner here, though, and it’s the Ford Territory. As for safety, the Changan CS75 Plus protects its occupants with six airbags (driver, front passenger, side, curtain, knee), ABS with EBD, traction control, stability control, hill-start assist, and hill-descent control. Unlike its refreshed sibling, the CS35 Plus subcompact crossover, the CS75 notably lacks active safety features. The saving grace is a 360-degree camera that detects each turn you make, keeping you safe against blind spots. It’s also a nifty tool for smoother parking.

On the other side of the equation, we have the Ford Territory, which boasts class-leading active safety technology. It has driver, front passenger, curtain, and side airbags to keep occupants safe. Besides that, the Territory features ABS with EBD, traction control, and hill-launch assist. Where it gets really interesting is the addition of adaptive cruise control, forwarding collision warning, autonomous emergency braking, blind-spot monitoring, lane departure warning, and a tire pressure monitoring system. The 360-degree camera on the Titanium variant is also of higher quality than what’s on the CS75 Plus, but it largely serves the same purpose for both vehicles.

It’s safe to say (no pun intended) that the Ford Territory’s list of safety features trumps that of the Changan CS75 Plus. The active safety tech on the Territory is simply too much for the CS75 Plus to overcome. Adaptive cruise control, for example (standard cruise control on the CS75 Plus), is an advanced feature that many buyers appreciate. That’s not to say that the Changan’s crossover isn’t a safe car. It’s just that the Ford’s bet is better equipped, and it shows on the scoreboard. The Changan CS75 Plus comes equipped with a 1.5-liter turbocharged gasoline direct-injection (TGDi) engine delivering 176 hp at 5,500 RPM and 265 Nm of torque at 1,450 to 4,500 RPM. The turbo mill sends power to the front wheels through a six-speed automatic transmission. It’s a capable power plant, and you won’t feel starved for power in most situations, especially in Sport mode.

The Ford Territory, on the other hand, packs a 1.5-liter naturally aspirated EcoBoost engine that makes 141 hp at 4,500-5,200 RPM and 225 Nm of torque at 1,500-4000 RPM. While not underpowered by any means, the lack of a turbocharger and a lower horsepower figure naturally puts it at a disadvantage against the CS75 Plus. We have to give this category to Changan. 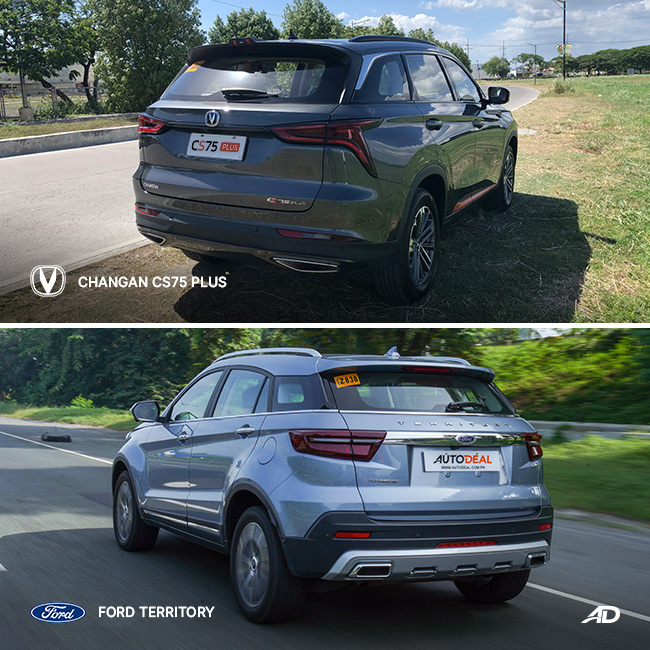 The Ford Territory Titanium is a full P69,000 cheaper than the sole Changan CS75 Plus model. The beefier turbo engine could justify that higher price tag, but we feel the Territory’s advanced tech is worth a lot more than the price difference. It seems like a no-brainer here, so the Territory wins the price category. The local compact crossover segment is getting hotter and hotter every year, with new players entering the field left and right. Both the Changan CS75 Plus and the Ford Territory are among the newer vehicles to enter the fray, but both have already made their presence felt in a crowded segment.

If you want aggressive looks and an engine to match, the CS75 Plus could be the crossover for you. If you’re looking for a vehicle that seemingly has it all—from looks, capability, features, and price—the Territory is the way to go. You won’t go wrong with either, but as we’ve learned, the Ford Territory comes out on top.