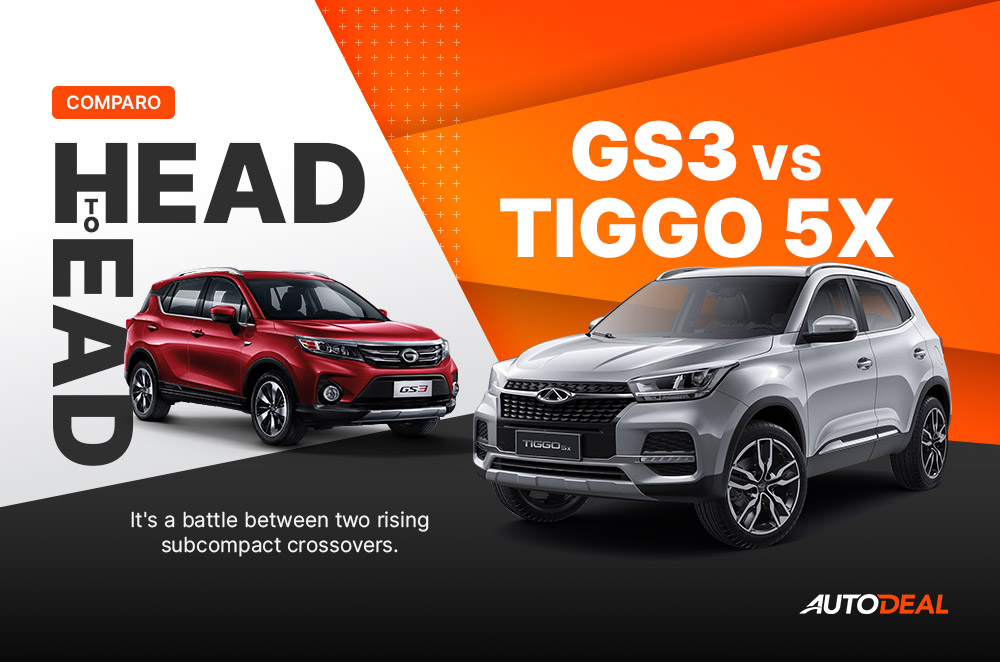 These days, it feels like subcompact crossovers are a dime a dozen. Every car manufacturer seems to have one in their lineup, and why not? Crossovers are the darlings of the automotive industry, at least in the Philippines and at least for the time being. Now, we compare two of the rising models in the segment: the GAC GS3 and the Chery Tiggo 5X. In this battle between Asian brands, we find out which crossover stands on top. 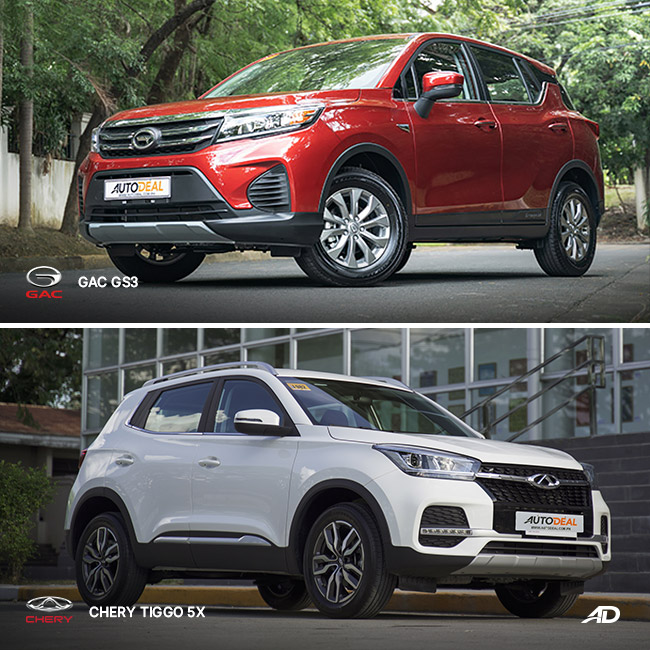 On the outside, the GS3 and Tiggo 5X appear similar. Upon closer inspection, however, we can see the details that set the two apart.

The GS3 is equipped with halogen headlights and LED taillights as standard, with LED daytime running lights available on the higher-spec variants. The Tiggo 5X meanwhile gets halogens for the front and rear, with LED DRLs also available for the top variant.

For the wheels, the GS3 has 16-inch and 17-inch alloys for the lower trims, with an 18-inch option for the top-spec model. 16-inch rims are standard for the Tiggo 5X, but a 17-inch option is also available.

As for dimensions, the Chery Tiggo 5X is longer, wider, and taller than the GAC GS3. It also has higher ground clearance, at 190 mm vs. 183 mm.

If we consider the lower trim levels only, it would have been a tie. The Tiggo 5X is already larger than the GS3, but the top-spec variant also adds nicer exterior lighting, a roof rack, and a sunroof. For this reason, we feel the Chery Tiggo 5X deserves a point for this category. Stepping inside the two vehicles, we see that the changes are more apparent. The GS3 features a playful and sporty interior with rounded corners and colored accents. The Tiggo 5X meanwhile has a clean and minimalistic dashboard with touches of chrome.

The entry-level Tiggo 5X is similarly sparse, but it does come with a remote key and 6-way manual seat adjustment. The higher variants of the Tiggo 5X get keyless entry with remote start, push-button start, tailgate remote unlock, and cruise control.

As for the infotainment systems, the entry-level GS3 has a simple audio system with 4 speakers. Going up the variants, the GS3 gets an 8-inch touchscreen display with steering wheel controls, plus six speakers and Bluetooth support. Except for the base model, which has a 4-speaker radio, the Tiggo 5X features a 9-inch touchscreen with steering wheel controls and smartphone mirroring.

This category is definitely close, with both sides having similar features for the higher trim levels. For interior and technology, we’re calling it a tie. For the Chery Tiggo 5X, the engines are the same for all variants. A 1.5-liter gasoline engine powers this subcompact crossover, outputting 114 hp and 141 Nm of torque. Drivetrain options include a 5-speed manual transmission and a CVT.

Power is strikingly close again, and you can't go wrong with any of the Tiggo 5X variants, but the GS3 pulls away with its turbocharged engine option and 6-speed transmission. The GS3 has more standard safety features, plus the extra airbag and wide-angle camera are nice to have. In terms of safety, the point goes to the GAC GS3. As for pricing, the Tiggo 5X is more affordable than the GS3 across all their variants. The price difference is justifiable, though, with the GS3 having a good set of tech and safety features. The Tiggo 5X starts at P818,000, a full P80,000 more affordable than the base-model GS3. For the top-spec variants, the price difference goes up to P88,000.

In terms of affordability, the Chery Tiggo 5X is the clear winner. While it misses out on a few features, it makes up for it with its larger body and clean-looking interior. 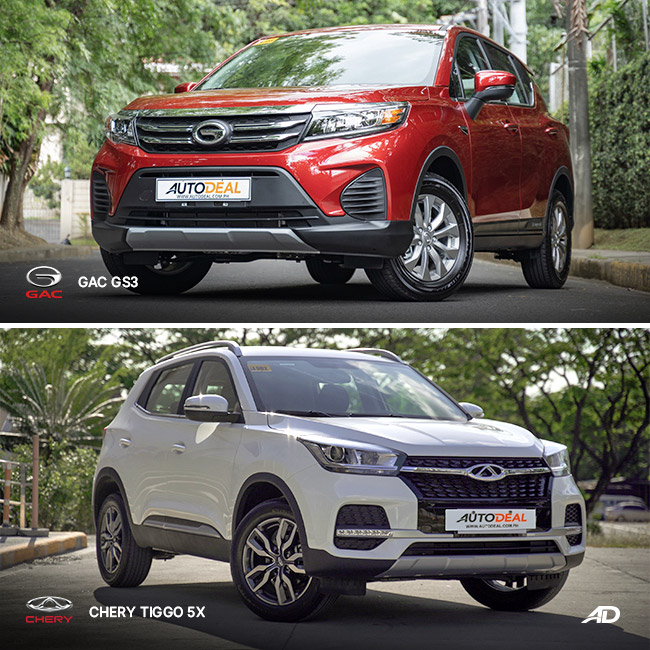 This is a tough one, folks. The GAC GS3 and Tiggo 5X both take two categories, tying one. The GS3 wins with power and safety, while the Tiggo 5X takes the exterior and pricing categories. The two subcompact crossovers are tied in terms of interior and technology, with both being more or less equal in that department. The GS3 and Tiggo 5X are two of the more affordable subcompact crossovers you can buy today. Despite their lower price points, the two are both packed with features that enable them to compete with more expensive models in the segment.

Chery offers more at the car's given price point, and you do save money by getting the Tiggo 5X. We also can't forget the 10-year powertrain warranty that Chery offers for its vehicles. That said, the turbo option and advanced safety features on the GS3 are just too good to pass up.

So, for this battle, we’re breaking the tie and awarding the win to the GAC GS3. Still, both these vehicles are good options and should be considered when looking for an affordable subcompact crossover.