Small hatchbacks are a slowly growing niche in the Philippine automotive market thanks to the rise in interest for entry-level mobility. These small thrifty vehicles offer its buyers a compact but spacious form factor that is paired with a frugal engine. These are ideal for those looking for a commuter car that can easily get you from point A to point B along with a few creature comforts along the way. Not only are these small hatchbacks ideal for the city but they can also be used for out of town trips as well. We take a look at two hot contenders in the market - the Honda Brio and the Toyota Wigo. Let’s put them head-to-head against one another to see which is better, at least on paper. On the exterior, these vehicles carry the same general styling design; a short snout, four doors, and a hatch at the back. The Toyota Wigo has an edge in this category as it has gotten the most recent facelift out of the two. Toyota Philippines has given its small hatchback a more aggressive look with a new face and a more angular front bumper giving it a meaner look all while retaining the same body shape as the previous generation. It also comes with a new variant dubbed the TRD-S adding a bit more flavor to its existing lineup. Not to mention the Toyota Wigo also has projector headlights as standard.

The Honda Brio, on the other hand, is the older of the two models as it was introduced into the market back in 2019. It comes with a more subdued look rather than its angrier-looking Toyota rival. Unlike its predecessor, the 2019 Brio comes with a new rear hatch, a new set of taillights, and a new front fascia as well.

In terms of the exterior, the Toyota Wigo takes the point for being the more recently updated vehicle. With styling being a subjective thing the small Toyota hatchback also has the advantage of having projector halogen headlights a far better design with a clearer throw and cut-off compared to the Brio's halogen reflectors. Styling aside and in terms of equipment alone, the Wigo takes the advantage.

By pricing alone the Toyota Wigo has an advantage in this category. The small Toyota hatchback comes with a more affordable price for both its entry-level E variant as well as its top-of-the-line TRD-s variant compared to its Honda rival. There is also a consistent P30,000 difference between the Brio and Wigo in terms of pricing across all variants, this gives the Toyota hatchback a clear edge over its rival. 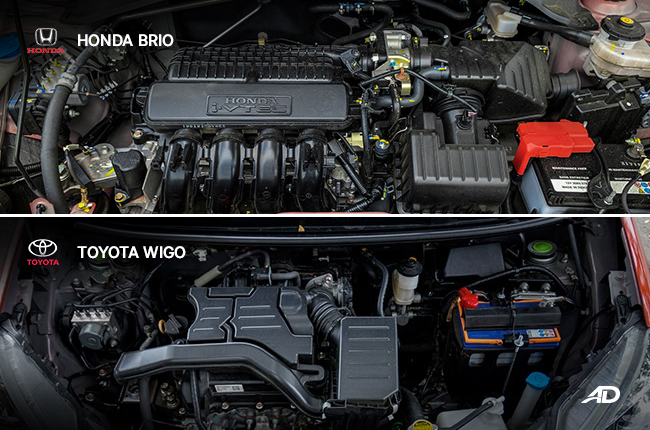 Here is where things get interesting as both vehicles come with different motors and different transmission options. The Toyota Wigo comes powered by a 1.0-liter 3-cylinder motor that produces 65hp and 89 nm of torque. The small Toyota hatchback can be had with either a 5-speed manual or a 4-speed automatic transmission. The Honda Brio, on the other hand, comes powered by a 1.2-liter 4-cylinder motor which gives the vehicle 89hp and 110 Nm of torque. Similar to its Toyota counterpart it too can be had with a 5-speed manual, however, where the two differ is in the automatic option where the small Honda hatch can be had with a more modern CVT.

In terms of power alone the Honda Brio takes a point. The small Honda hatchback brings with it 4-cylinders instead of three found in the Wigo, which gives it 34 more horsepower and 21 Nm of torque more compared to its Toyota counterpart. It also comes with the added bonus of a much newer transmission which will also help you make the most of what the 1.2-liter motor can offer all while aiding you in fuel economy. 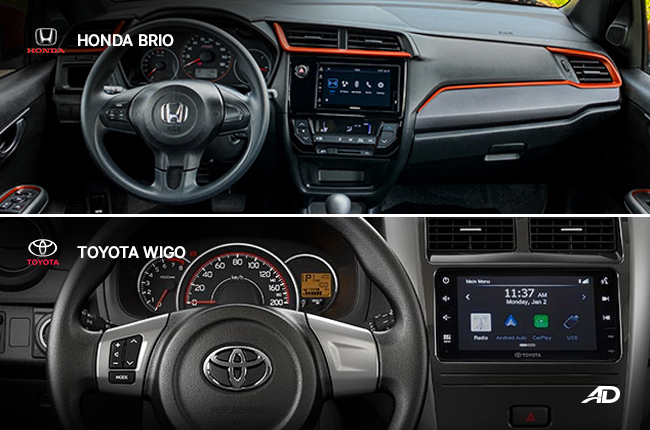 Both small hatchbacks have a good number of interior features to make their passengers comfortable and entertained during drives.

The Wigo comes with a new 7-inch infotainment system that comes with Android Auto and Apple CarPlay capabilities for its TRD-S and G variants. It is important to note that the E variant only comes with a standard 2-DIN head unit. The Wigo also comes with a new digital climate control system. While not standard for the entire lineup these new features to the vehicle are more than welcomed additions.

The Honda Brio, on the other hand, brings with it a 7-inch capacitive touchscreen with Bluetooth, USB, and an AUX jack. Similar to its Toyota counterpart the Brio also comes with a digital climate control system. It is important to note that while the Bluetooth and USB functions are found in the entire Brio lineup Android Auto and Apple CarPlay are not available.

The Toyota Wigo gains another point in this category due to its Android Auto and Apple CarPlay capabilities and back camera that come as standard right off the showroom floor for two of its variants. This is an important feature to have especially during these smartphone integrated times as the driver will no longer need to purchase a phone holder and can use the in-built screen for navigation. This also gives the driver the added bonus of using Siri or Google Assistant to help with their phone notifications without having to physically pick it up while driving. This gives the Wigo a better value for money proposition as you will no longer have to install these features as an aftermarket option which will add to the total cost of the vehicle and if incorrectly done may lead to an expensive repair.

For vehicles of this size, safety is also another important factor to consider. The Toyota Wigo brings to the plate dual airbags, ABS, rear backup sensors, a rear backup camera, keyless entry, and an alarm system with an immobilizer. It is important to note, however, that some of these features are not present in the entry-level trims of the vehicle.

The Honda Brio on all trim-levels carries the same safety features. This means that the vehicle as standard comes with the following safety features: dual airbags, keyless entry, alarm with an immobilizer, speed-sensing door locks, and ABS.

As much as we want to give them a tie for this category, we can't and we still have to declare a winner. While the Brio has many safety features standard across the line, the small Toyota hatchback has the advantage as to what it can offer you straight out of the showroom floor especially for its TRD-S variant. For newer drivers having backup sensors and a backup camera despite these two vehicles being small can be a useful aid especially when learning to park. The feature of having a dashcam as standard as well is another useful feature to have from the factory as it gives you another set of eyes and ears if you get into an accident, which will help you clear your side of the incident in case there is a dispute. Having these features as standard and under warranty straight out of the factory makes for a more appealing incentive to get the vehicle rather than one where you have to install it as an aftermarket option. If you are looking for a feature-packed small hatchback at an affordable price then the Toyota Wigo is the one for you. It brings with it a new design, better safety and convenience features, and a frugal engine that will make sure to make the most of what you give it.

On the other hand, if you want something with a little more power on tap and a newer transmission option then the Honda Brio is the small hatchback for you. It delivers similar technology to its Toyota counterpart but also brings with it a better driving experience. While it doesn't have a lot of tech as standard it already has a solid chunk of the market for those who want a better-styled counterpart to the small Toyota hatchback.

Now onto the final verdict while both vehicles have their clear advantages over one another the Wigo's more attainable price range and with the features, it has, gives it a more attractive value for money proposition. You get more out of the showroom floor and under warranty for P30,000 to P35,000 less than its Honda counterpart. According to the spec sheet alone, this gives the Toyota Wigo an advantage.

That's not saying that the Honda Brio shouldn't be on your list if you prefer it over the Wigo, by all means, go and get it as it not only offers you more power than the small Toyota hatchback but it also comes with a more rugged look similar to what you get on the Mobilio.

However, we still have to give the overall win to the Toyota Wigo as based on the specs alone and what each vehicle gives straight out of the factory. You get a better value for money proposition especially with the additions of projector headlights, a reverse camera, reverse sensors, and a dashcam straight out of the dealership. Of course, we highly suggest that you give both vehicles a test drive before you purchase one. For our take on the matter, you can consult our reviews of either model.