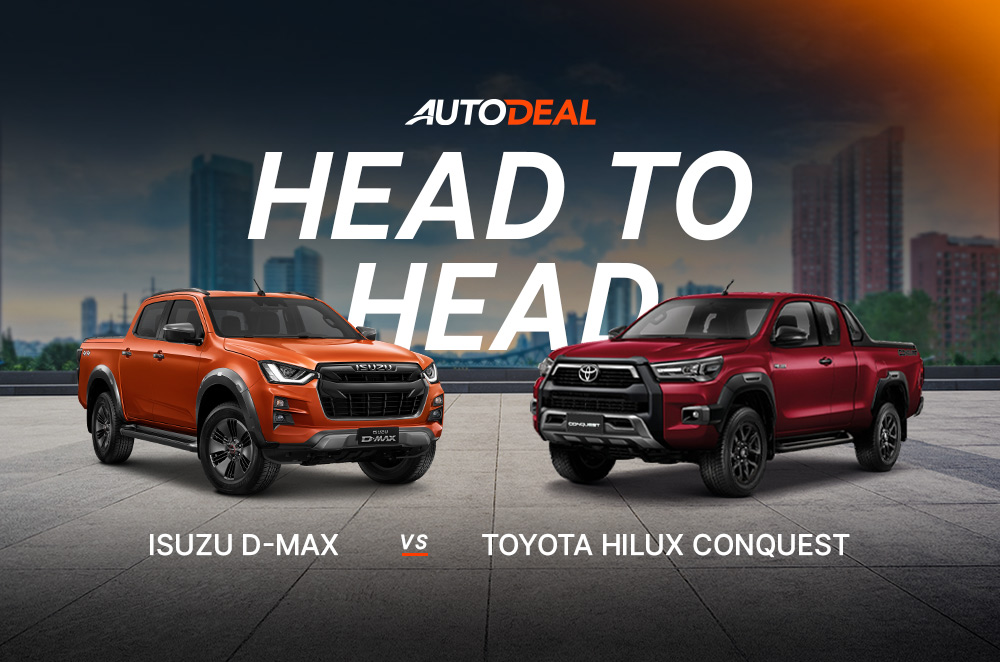 The midsize pickup segment is dominated by established nameplates such as the Isuzu D-MAX and Toyota Hilux. These Japanese contenders are all geared up for the battle, with Isuzu giving the D-MAX an all-new chassis and look, while Toyota is treating its Hilux with a new face and an extensive range of upgrades. Both of these models are up to date, but which between these two will stand out on this head-to-head comparison.

For this head-to-head, we shall be comparing range-topping variants due to their close price tags and competitive specifications: the Isuzu D-MAX 3.0 4x4 LS-E AT and the Toyota Hilux Conquest 2.8 DSL 4x4 AT. With all that said, let’s go through each of the categories, shall we? 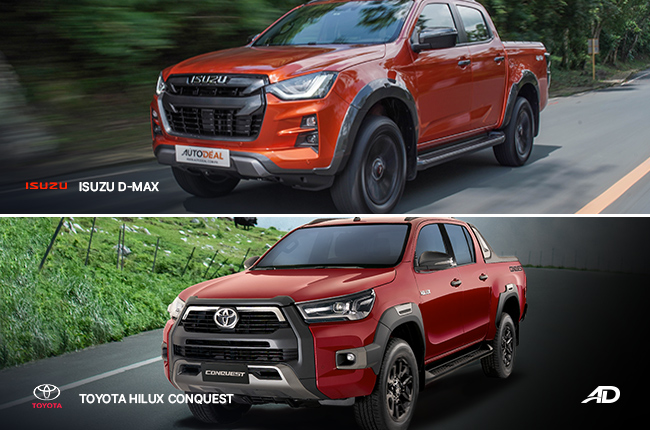 Both midsize pickups feature rugged appointments, though there are of course some distinctive highlights that appear to be unique on each model. Overall, the Isuzu D-MAX presents its outdoorsy vibes in a more subtle approach. The Toyota Hilux, on the other hand, has more of that ‘in your face’ factor, wherein the overall vibes of the exterior appear to be louder than that of the D-MAX. Instead of chrome, both models feature different accents, specifically matte black materials on the Hilux Conquest 4x4 AT, and gun metallic accents on the D-MAX 4x4 LS-E AT. As for the wheels, both the Toyota and Isuzu come with a set of 18-inch alloys wrapped in 265/60 tires, however, the design of the rims do differ from each other.

Both the Hilux Conquest 4x4  AT and the Isuzu D-MAX LS-A benefit from LED headlights and fog lamps for maximized visibility during nighttime. Both models also come with repeaters and power functions on the side mirrors. For added convenience, these midsize pickups feature a smart-keyless entry, which allows you to unlock their doors through a convenient button placed on the door handle. There’s even stepboards and roof rails, which should allow you to install your roof rack and load it up for your next adventure.

Both rear-ends feature distinct taillight designs and a sports bar for that rugged look. Only the Hilux has a tailgate assist feature, making opening and closing the rear door an easier task. While the Hilux still retains the same cargo bed figures from its predecessor, the all-new Isuzu D-MAX has a slightly larger bed compared with the outgoing model.

As for ground clearance, the Hilux sits 295mm above the ground, while the D-MAX sits a bit lower at 240mm. Comparing the dimensions of both vehicles, the Hilux Conquest 4x4 AT appears to be larger than the D-MAX LS-E.

With all that said, we’ve decided to end this round with a tie, as both models offer desirable exteriors fitted with such rugged appointments, allowing you to conquer the trail and stand out. 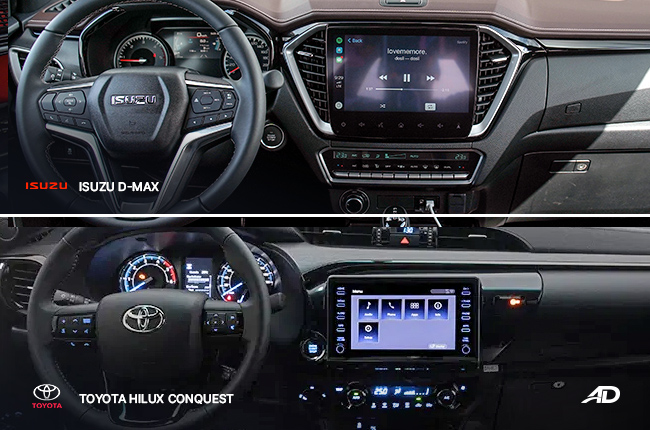 Passengers will be delighted by the generous amount of room inside both pickups. In terms of cabin layout, the D-MAX LS-E appears to be more pleasing to the eye. It even gets gorgeous brown leather seats that uplift the overall ambiance of the interior. While the Isuzu features a black and brown layout, the Hilux, on the other hand, sports an all-black theme, from the dash, to the door panels, and even on its fabric seats.

In terms of amenities, only the Isuzu gets rear air vents along with a USB charging port for backseat passengers. Both midsize pickups, on the other hand, come with steering wheel-mounted audio controls and a dual-zone climate control. As for in-car entertainment, the Hilux Conquest 2.8 DSL 4x4 AT features an 8-inch touchscreen display which comes ready with Apple CarPlay and Android Auto, along with a 6-speaker audio system. The Isuzu D-MAX LS-E, on the other hand, gets a larger 10.1-inch infotainment system that also comes with Apple CarPlay and Android Auto. The D-MAX also gets an 8-speaker system, as compared with the 6-speaker setup of the Toyota’s.

Given the larger and more intuitive infotainment system, plus the extra amenities which can be found at the back, the Isuzu D-MAX wins this round. 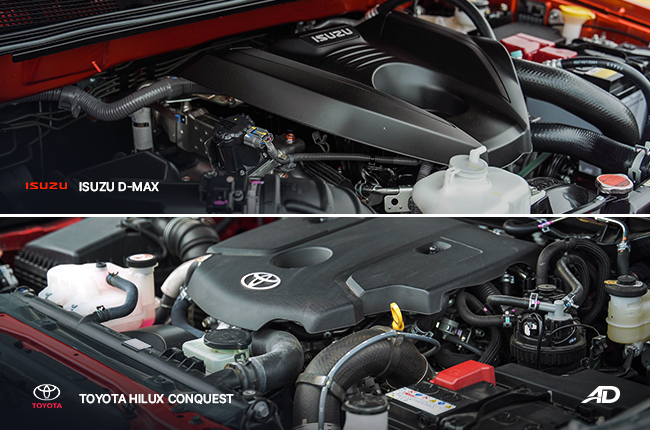 Both cars have esteemed capability, all thanks to the 4x4 powertrain and potent power plants. Specifically, the Isuzu D-MAX 4x4 LS-E AT is powered by the tried and tested 3.0-liter Blue Power turbo diesel engine that puts out 187 hp and 450 Nm of torque. The said mill is then mated to a 6-speed automatic. The Hilux Conquest 4x4 AT, on the other hand, is run by a 2.8-liter turbo diesel that produces a healthier 201 hp and 500 Nm of torque. Like the D-MAX, the Toyota’s engine is also mated to a 6-speed automatic gearbox.

While the Isuzu’s 3.0-liter diesel engine still puts out good numbers, the Hilux’s smaller 2.8-liter engine does boast of greater power figures, making it the overall winner of this round. 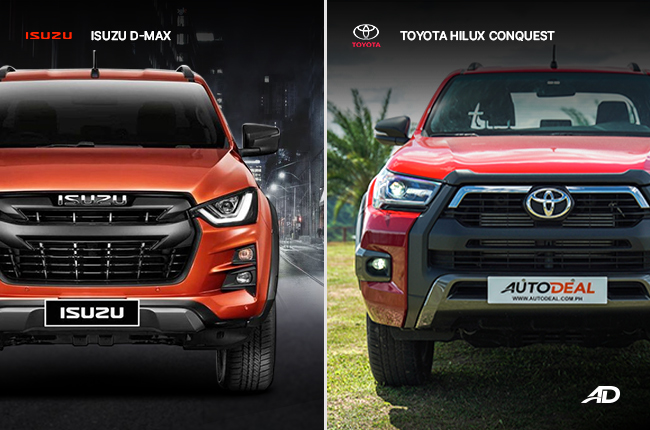 Both the Toyota Hilux Conquest 2.8 DSL 4x4 AT and Isuzu D-MAX 3.0 4x4 LS-E AT benefit from a range of standard features including a set of airbags (driver, front passenger, side, curtain, knee), Anti-lock Brake System (ABS), Electronic Brake Distribution (EBD), stability control, hill-start assist, hill-descent control, ISOFIX child seat anchors, and a reversing camera. The Isuzu D-MAX is equipped with a total of 8 front and rear parking sensors while the Toyota Hilux only comes with 6 sensors in total for both the front and rear.

The D-MAX LS-E gets quite a lot of safety features despite its more affordable pricing. With that said, the Isuzu serves as the deserving winner of this round. As mentioned, both range-topping variants are closely priced. Respectively, the Hilux Conquest 2.8 DSL 4x4 AT retails at P1,830,000, while the Isuzu D-MAX is priced at P1,825,000. Surprisingly, the D-MAX 3.0 4x4 LS-E AT does give you more for less, from convenience to safety features which makes it, once again, the overall winner of this round. 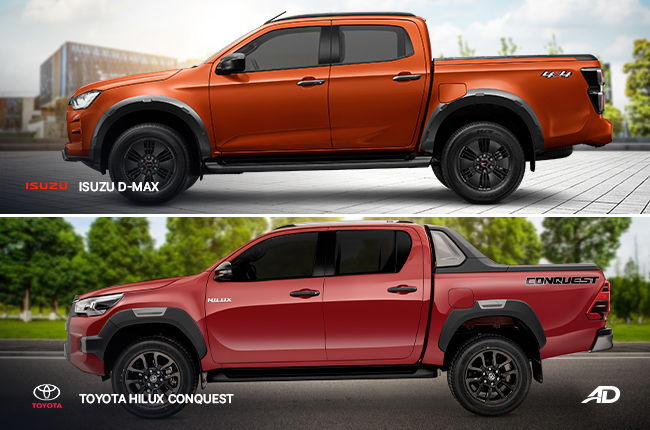 Both the Isuzu D-MAX 3.0 4x4 LS-E AT and the Toyota Hilux Conquest 2.8 DSL 4x4 AT are quite competitive in its segment. Aside from the good value proposition, both models offer that tried and tested reliability which is indeed common among Japanese vehicles. However, we’ve come to the decision that the overall winner of this head-to-head comparison is the all-new Isuzu D-MAX. The new kid in the block impressed in so many ways, especially with its desirable interior, a slew of high-tech features, and its Advanced Driver Assist System which should establish better confidence among drivers.

While the Hilux may be a bit short on the features list, it’s still a Toyota, and you know what that means. It’s going to take years before this pickup reaches its retirement phase. You really can’t go wrong on whichever midsize pickup you choose. At the end of the day, it’s still up to your personal preference.