The small hatchback segment in the Philippines offers buyers compact and feature-packed vehicles that won’t break the bank. Enter the Kia Picanto and the Toyota Wigo, two popular choices in the segment that offer a lot despite their small size. The Toyota brings with it a refreshed more angular look, while the Picanto comes with a Red Dot Award-winning design that helps give it a timeless look. With both vehicles on a relatively even playing field, we compare each one based on their specifications to see which small hatchback comes out on top. 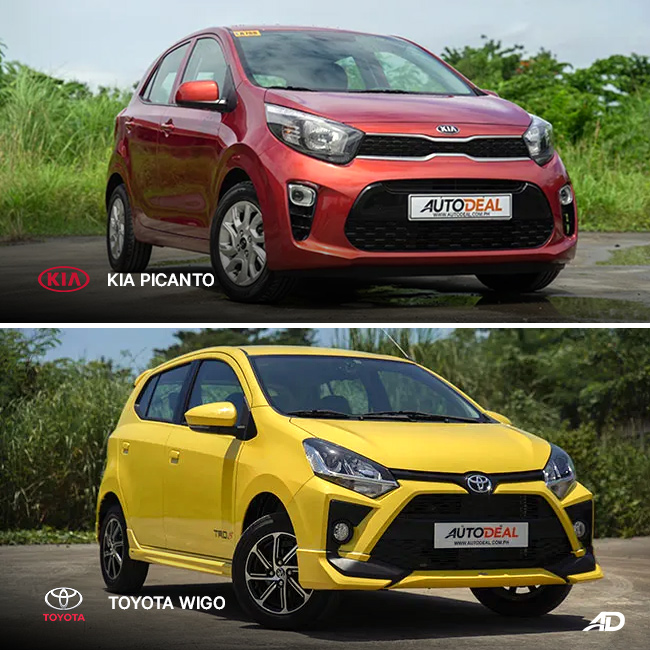 When it comes to the exterior kit of both hatchbacks they are both similarly equipped. Both the Wigo and the Picanto come with halogen headlights but the Toyota hatchback comes with a more substantial set of projectors. This gives it a clearer cut and a better throw than Kia’s multi-reflector setup. Aside from this, the Toyota hatchback also has the benefit of getting LED foglamps as well. The Wigo also comes with a TRD S body kit for those who want a sportier and more angular look to their hatchback.

Size-wise the standard Toyota Wigo without the TRD S body kit is actually bigger than the Kia Picanto. It is about 65 mm longer, 5 mm wider and 25 mm taller than its South Korean counterpart. This gives the Wigo slightly more spaces in terms of outright dimensions. Because of its slightly better equipment and bigger size, we give the win for this category to the Toyota Wigo. On the inside, both vehicles are similarly equipped. Their designs are utilitarian and functional but still display everything that you need to know right in front of you. The climate controls are easy to use for both vehicles, however, the Wigo comes with a digital climate control system, while the Picanto only comes with dials. While both are capable enough of cooling the cabin on a hot day, the set and forget functionality of the Toyota hatchback gives it an advantage over its Kia rival. However, it is important to note that the display can sometimes be hard to see if there is direct sunlight on them. A minor inconvenience but it does not take anything away from the vehicle’s ability to cool the cabin.

When it comes to the cabin, the material of choice is hard plastics. While these may not feel good to the touch, they are durable and will last a long time. Aside from this, both hatchbacks come with cloth seats, however, the Wigo comes with a more distinctive design thanks to a red accent pattern. Styling aside, both are on the similar ground when it comes to their cabin features. 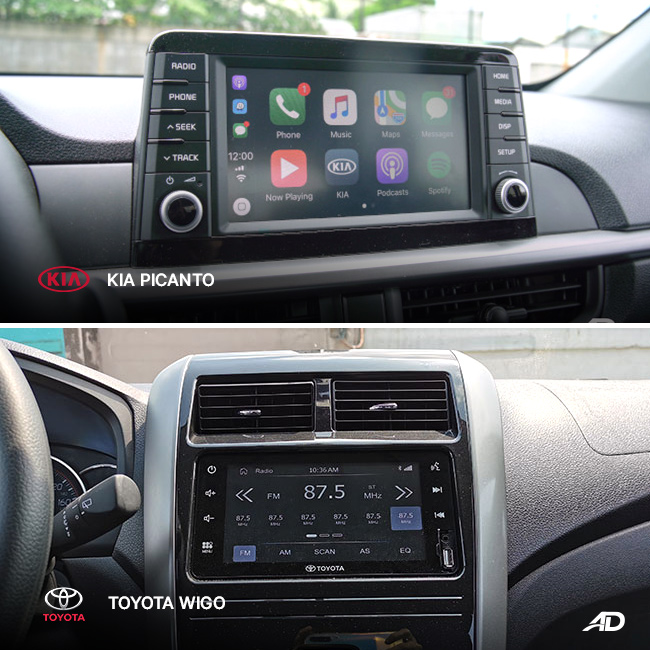 Again these two vehicles are neck and neck when it comes to the technology that they come equipped with. Both come with the option of a 7-inch infotainment system that has Apple CarPlay and Android Auto for their higher variants, while their lower models come with a 2-DIN head unit that comes with Bluetooth and USB connectivity. For this category, we will give it a tie as there are only negligible differences between the two hatchbacks Under the hood, there is a clear difference between the two hatchbacks as the Picanto comes with two engine options available, while the Wigo only has one. The South Korean hatchback can be had with either a 1.2-liter or a 1.0-liter gasoline engine. Output for the higher displacement motor is at 83hp and 122 Nm of torque, while the smaller motor makes 66 hp and 95 Nm of torque. The Wigo on the other hand can only be had with a 1.0-liter naturally aspirated gasoline engine that produces 66 hp and 89 Nm of torque.

This gives the Kia the clear advantage as even in its 1.0-liter configuration it still makes more power than its Toyota counterpart. As far as transmission options are concerned both vehicles can be had with either a 5-speed manual or a 4-speed automatic transmission. For this category, we give the win to the Picanto as it produces more power. As far as safety features are concerned, there is a clear distinction between the two, especially with their lower variants. The Toyota Wigo comes with dual airbags, ABS, and back sonar for all of its models, this gives the vehicle an advantage over its Korean rival as only the top-of-the-line Picanto comes with these features. To add to this a reverse camera and dashboard camera is also available for the G and TRD S variants of the Wigo. It is important to note that, while a reverse camera is present its video resolution is can be a bit blurry especially during high brightness situations. Regardless it’s still a nice feature to have especially for new drivers as they can easily see what’s behind their vehicle.

The Kia Picanto is on the back foot in this category as its entry-level LX model only comes with seatbelts and a driver airbag for safety features. The higher-end EX model is the one that gets all the bells and whistles as it gets driver and front passenger airbags, ABS, as well as a reverse camera with static guidelines. In terms of reverse cameras, the Picanto comes with a clearer resolution and the static guidelines also make it easier to maximize space behind the vehicle.

For this category, we give the win to the Toyota Wigo as it offers more standard features throughout its variant lineup. When it comes to the price tags of these two small hatchbacks, there is a noticeable difference between the two as the Picanto comes out as a more expensive vehicle. While both are still affordable options in their own right, the price tag doesn’t lie. The Wigo can be had at its most affordable for P568,000, while its Picanto counterpart will cost you an additional P22,000 more. Even at the entry-level variant, the Toyota hatchback is already showing a better value for money proposition as you can more standard equipment compared to its Kia counterpart.

Go a little higher in the variant range and you get the EX and TRD S models of each small hatchback. The Wigo TRD S being the cheaper of the two top-of-the-line models priced at P700,000 already comes with a host of features that new drivers or interested buyers, in general, will appreciate. The Kia Picanto, on the other hand, is P45,000 more expensive than its Toyota counterpart but comes with more refinement. Given their price differences, the Toyota Wigo comes out on top for this category. It is a more affordable vehicle and comes with a better set of standardized safety and tech features. 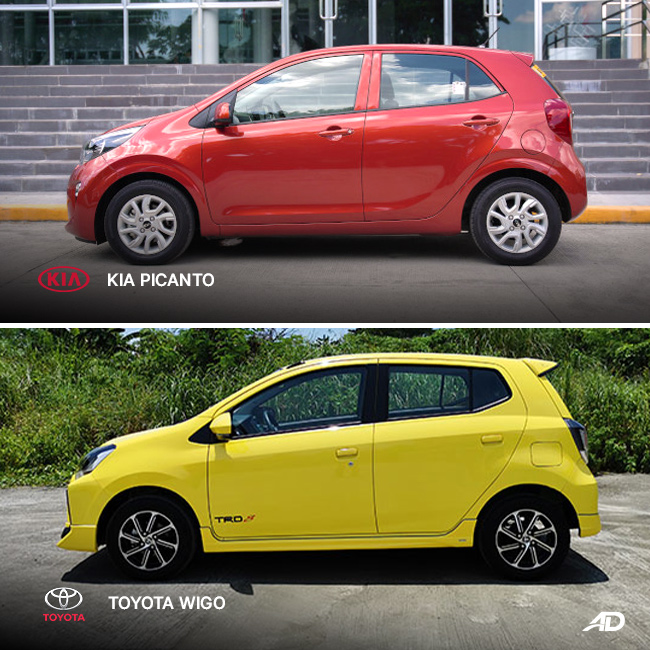 As far as specifications are concerned, the Toyota Wigo wins this head to head. It comes with better standard equipment and comes with a more affordable price tag compared to its Korean counterpart. That being said, the Kia Picanto is no slouch either as it comes with a good amount of features and a more refined ride. To add to this, the Picanto also comes with two more engine options than the Wigo and has a more powerful motor under its hood.

Whichever vehicle you choose, know that either vehicle is a great option as each one brings its own unique advantages and disadvantages over one another. If you want a more refined ride and more power, then the Kia Picanto is your best choice. If you want an affordable vehicle that comes with more standard equipment and a dashboard camera as standard for its highest trim level then the Wigo is a good choice. The overall win, however, still goes to the Toyota Wigo.