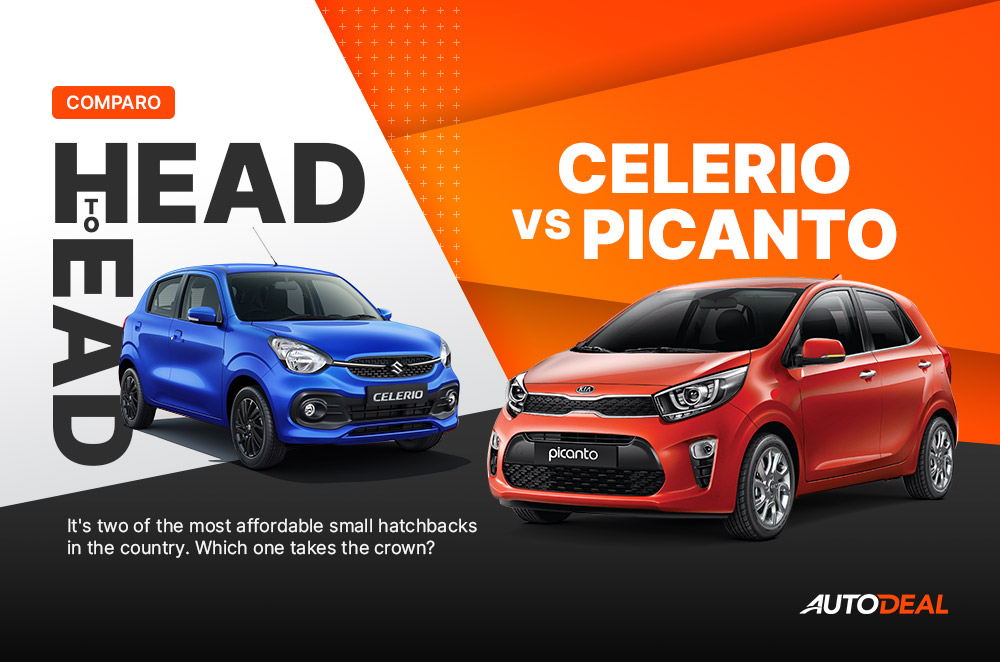 The Suzuki Celerio and Kia Picanto are two of the more affordable hatchbacks in the Philippines. In a country where buyers are starved for vehicles with low prices and ample feature sets, the Celerio and Picanto are in a unique position to satisfy the market.

That said, which among these subcompact vehicles deserves your hard-earned money? If you only have less than a million pesos to spend on a new car and you’re deciding between Suzuki or Kia, let’s find out which one you should buy. 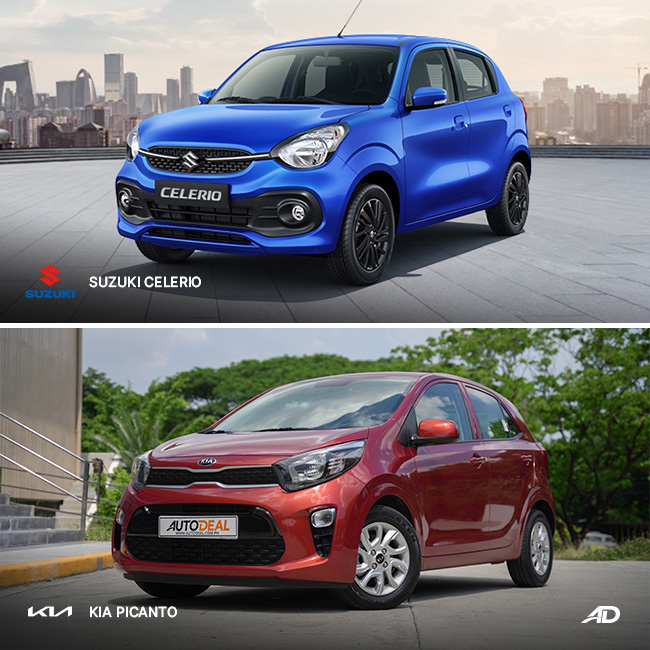 As far as looks go, both the Celerio and Picanto look fairly unique in their segment. The Celerio features an all-new design from 2022, while the Picanto received a facelift in 2020. The two are diminutive vehicles, but the new Celerio is 100 mm longer, 260 mm wider, and 60 mm taller than the Picanto. Suzuki also improved the cargo space, so the Celerio now has 295 liters of trunk space versus the Picanto’s 255 liters.

Both vehicles get an all-halogen lighting setup complete with fog lamps. There are no daytime running lights here, however. At the sides, the Celerio comes equipped with 15-inch black alloy wheels, while the Picanto gets smaller 14-inch wheel caps or alloys. Perhaps the only things that set the Picanto apart are its tiger-nose grille and the spoiler-integrated high-mount stop lamp at the rear. Other than that, the Celerio is bigger, bolder, and more substantial than Kia’s hatchback.

The Celerio also features a more recent design from Suzuki’s new HEARTECT platform. If you’re looking for something of considerable size but still fits in the subcompact hatch segment, there could be no better choice than the Celerio right now. 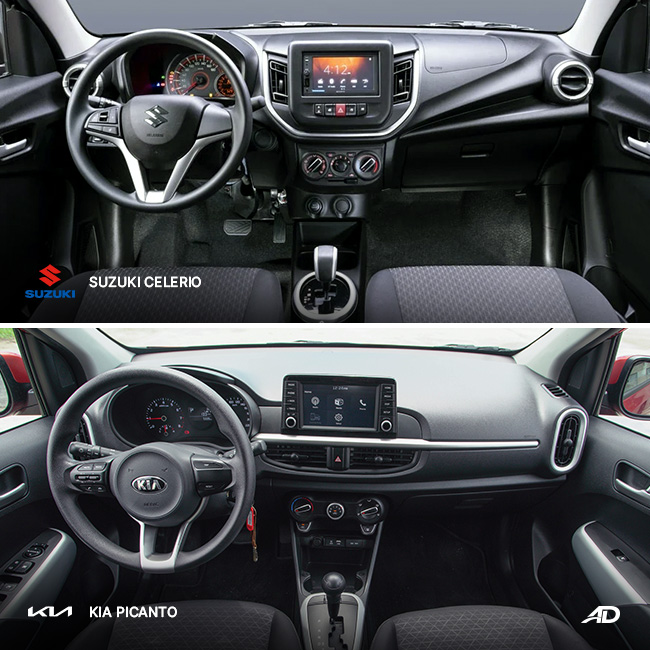 Sold as entry-level models in the Philippines, almost no one expects the Celerio and Picanto to come with well-appointed interiors, yet you may be mildly surprised. Starting with the Celerio, it has a clean, black cabin with patterned fabric seats. The spacious interior is peppered with chrome accents all around, and the sturdy build quality inspires confidence for daily driving.

In terms of tech features, the Celerio has a 6.2-inch Sony touchscreen infotainment system with Bluetooth, USB, and AUX connectivity. There are also audio controls on the steering wheel. Unfortunately, Apple CarPlay and Android Auto are absent. That might be a deal-breaker for some, especially in this era, and it’s completely understandable. 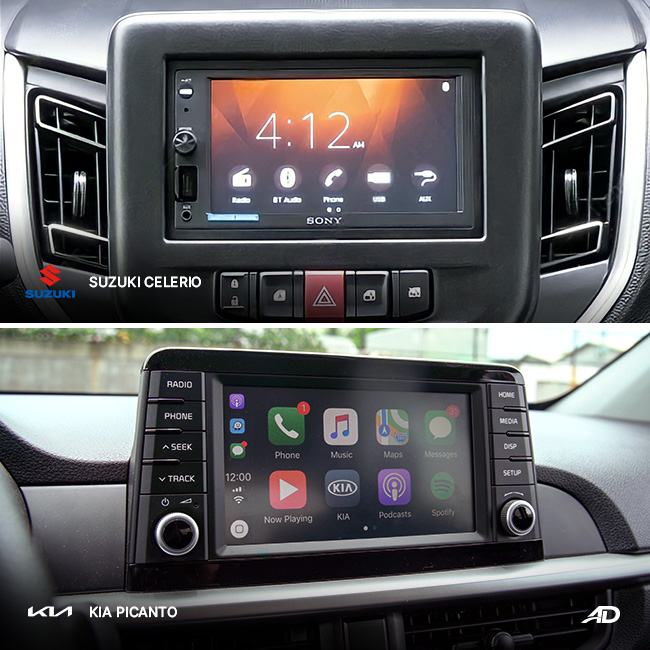 If you’re looking for smartphone connectivity, the Kia Picanto might be more your speed. Apart from its more stylish cabin with more to look at, it packs a seven-inch touchscreen unit with Apple CarPlay and Android Auto. More than that, it gets a 2.6-inch mono LCD unit nestled between analog gauges. Like the Celerio, the Picanto offers many storage options from cup holders to cubby holes.

As we’ve learned, neither vehicle has much to offer on the tech side. While both models have comfortable enough cabins, they’re not viable for buyers looking for the latest and greatest features. The Celerio and the Picanto do the minimum to appease today’s buyers, but the latter comes out slightly ahead with a more fashionable cabin and a more advanced touchscreen. 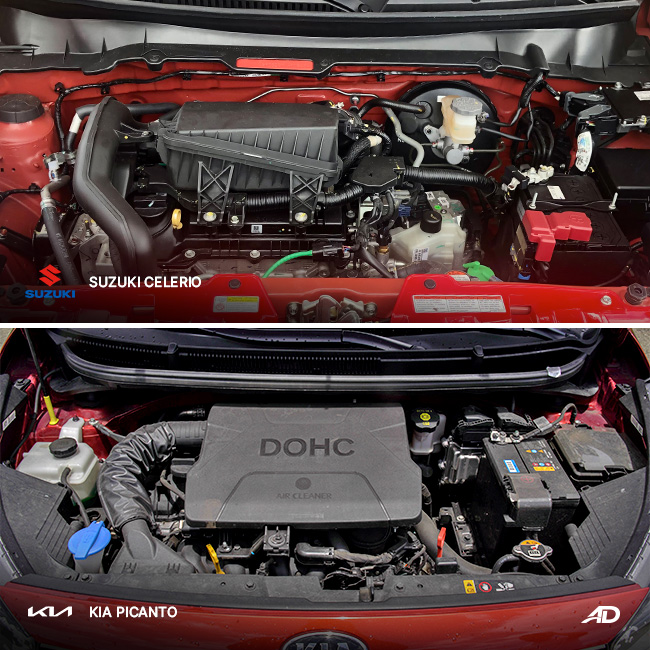 Subcompact hatchbacks are never the most powerful vehicles around, but you can bet that many of these models won’t disappoint when it comes to fuel efficiency. That’s true for the Suzuki Celerio, as it packs a 1.0-liter, three-cylinder DUALJET gasoline engine with Dual VVT. It delivers 67 hp at 5,600 RPM and 89 Nm of torque at 3,600 RPM. Transmission options include a manual gearbox and Suzuki’s Auto Gear Shift transmission, with the latter essentially giving you the flexibility of a manual and the sheer convenience of an automatic.

Comparing only the three-cylinder engines, it’s clear that the Picanto is slightly ahead in pulling power. When compared to the 1.2-liter power plant, the Celerio’s tinier engine will obviously struggle to catch up. Power is not exactly the Celerio’s selling point though, as at the time of its launch it was the most fuel-efficient car in the Philippines. Suzuki says it can deliver up to 28.25 km/L under the best conditions. It’s truly a stellar figure. Moreover, the Celerio has an Engine Auto Stop-Start System (EASS) for saving fuel during heavy traffic.

While the Picanto does have a more powerful engine option with its four-cylinder mill, the Celerio does enough with its advanced engine technology and fuel economy to warrant a tie. 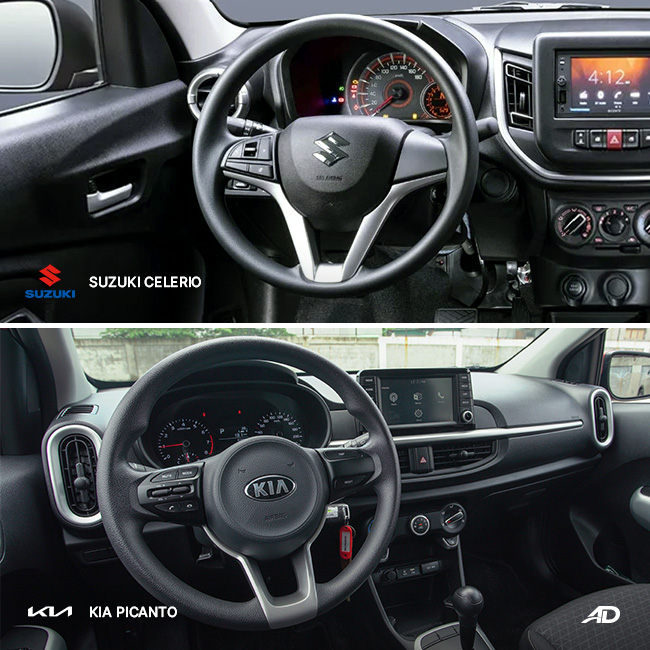 Safety is becoming increasingly important for new car buyers as manufacturers have raised the bar with advanced safety features. With the Celerio, it starts with the platform. It rides on Suzuki’s HEARTECT architecture, which ensures a light and rigid chassis with structural efficiency. Its notable features include an SRS airbag system, a seatbelt pretensioner and force limiter, an electronic stability program (ESP), an anti-lock braking system (ABS), brake assist, hill-hold control, and a rear parking sensor.

Meanwhile, the Kia Picanto also takes safety into consideration with the use of advanced high-strength steel (AHSS) and hot-stamped steel. These materials give the Picanto improved structural rigidity and body tensile strength while enhancing cabin protection and dynamic performance. The Picanto’s safety features include dual airbags, ABS, and a reverse camera.

The Suzuki Celerio promises a safer ride with its new platform and abundance of useful safety features. On the other hand, the Kia Picanto might do well with a feature update to keep up with some of its fiercest competitors. For this category, the Celerio deserves the point. 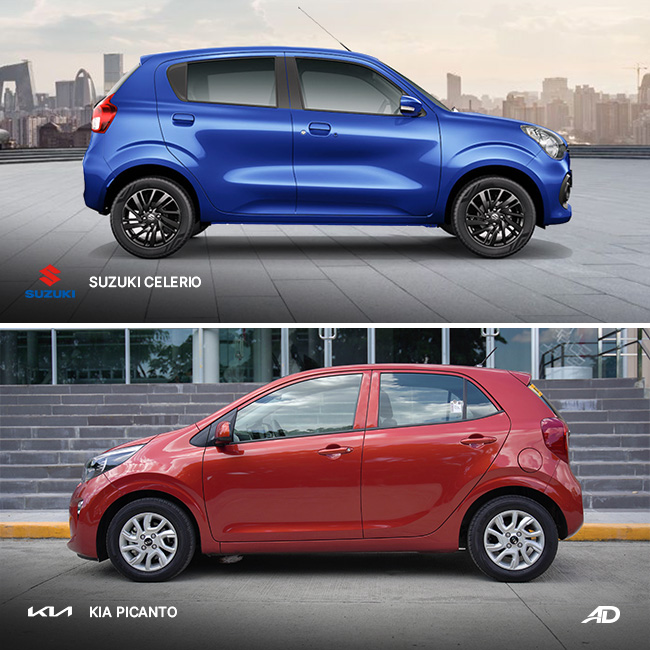 Small hatchbacks are known for their relative affordability. The Suzuki Celerio is available in only two variants, with the manual model selling for P708,000 and the AGS variant available for P754,000. The price range does seem steep considering the lower starting price of its competition.

The Kia Picanto starts at only P590,000 for the LX MT model, and it goes up to P745,000 for the most expensive EX At variant. At first glance, it’s a no-brainer that the Picanto takes this category. We can’t forget, though, that the Celerio comes with a supremely fuel-efficient engine and a host of engine and safety features that may justify its higher price tag. 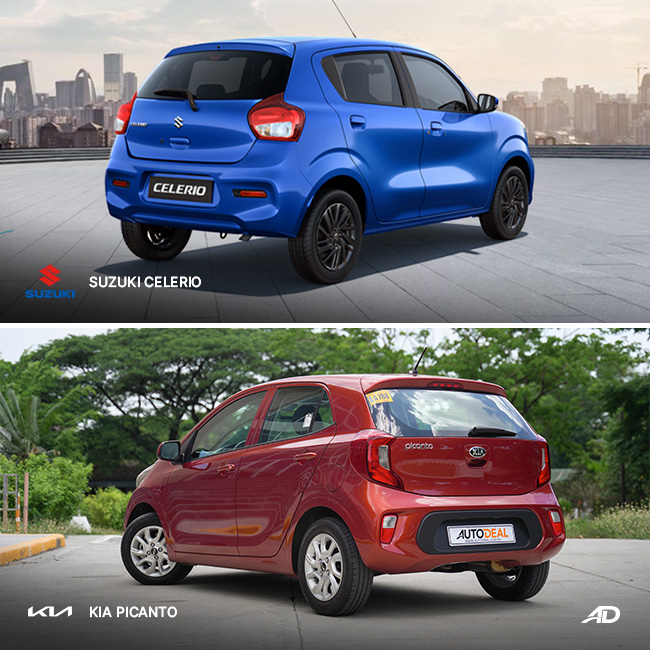 It appears we have a tie. Both subcompact hatchbacks have their own strengths and weaknesses, with the Suzuki Celerio having more modern looks, a larger form factor, and more safety features. It also comes with a highly economical three-cylinder mill. These might factor into why Suzuki’s entry has become more expensive than other vehicles in the segment.

On the other side of the equation, the Kia Picanto has a more stylish cabin with smartphone connectivity options, the choice of a more powerful 1.2-liter engine, and a lower price tag from the base model to top trim level.

In the end, it all comes down to what you value in a vehicle. If price is your sole consideration, get the cheapest Picanto and call it a day. If you’re willing to pay more for practicality and safety, the Celerio just might be up your alley. Whichever you choose, you’ll be assured of a quality hatchback with plenty to offer you for years to come.