With the recent launch of the 2019 Toyota Hiace, the van wars have heated up once again. What was considered the gold standard for people carriers for quite a while, the Toyota Hiace, got some serious competition with the appearance of the Nissan NV350 Urvan Premium. Until this day, these two vehicles have been duking it out, trying to win the hearts of businessmen and big families alike. We’ll be looking at the 2019 Nissan NV350 Urvan Premium and the 2019 Toyota Hiace GL Grandia Tourer, both top variant entries in this segment.

Does the 2019 Toyota Hiace solidify its position as the market leader in terms of features and specifications? Or does the Nissan NV350 Urvan Premium prove more than a worthy contender, usurping the throne? While we haven’t driven them back to back yet, let’s give you a quick rundown on their hard numbers as they go head-to-head. 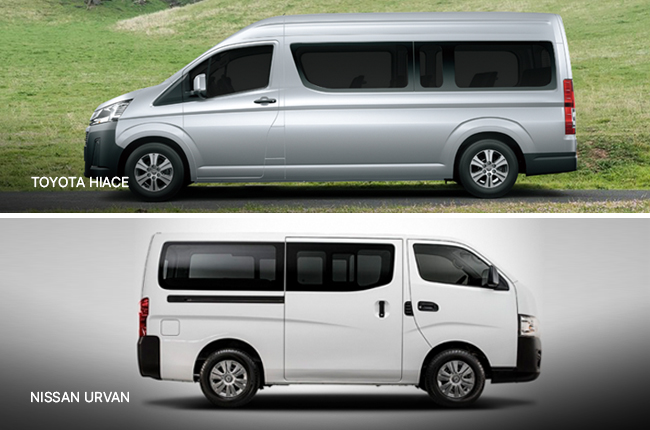 I think the most obvious change here is that the Toyota Hiace no longer features the traditional cab-over design, sporting a traditional hood with the engine in front of the firewall. This results in slight increases in length, width, and wheelbase to the Hiace, making it larger than the Nissan Urvan. The Urvan sticks to its guns with the traditional design, and it still does the job. The Hiace does benefit from new daytime running lights (DRL) and a new side mirror design for maximum visibility. From the front, the Hiace gets a more pronounced multi-section grille, while the Urvan has a clean and simple design. There aren’t much visual differences when it comes to the side, aside from the fact that the wheels on the Hiace are an inch larger in diameter and it does have a lower beltline when it comes to the front windows. The rear is the usual stacked taillight configuration; you really can’t add too much visual flair in this segment anyway. Right away, we can tell you this; the Urvan can carry one more passenger up front (two plus the driver, making 15) because of the centrally located seat. It’s not the most comfortable, but it does help in a pinch. The Hiace caps at 14 people, doing away with the center seat up front, but you do get a better thought out passenger feature set, offering individual USB ports for each row, and assorted cargo areas, especially overhead.

The seats on the Hiace also get our nod of approval because of their more comfortable design and feel, which is a mix of leather and fabric with retractable armrests. The Nissan Urvan is taller, however, offering 2,285 mm of height compared to the 2,280 mm of the Hiace.

Up front, you get a much more updated control layout in the Hiace, benefiting from steering wheel controls and a two-tone color scheme. Air conditioning is manually controlled in both vehicles, with individual ceiling vents per passenger.

Related: How to clean your car’s air conditioning system The Hiace trumps the Urvan by providing a touchscreen infotainment system over the usual 2DIN setup. You also get six speakers in the Hiace over the Urvan’s four speakers, and the Hiace also benefits from bluetooth, USB inputs, and phone mirroring. The Hiace also gets a very useful set of rear parking sensors with a reverse camera, steering wheel audio controls, and cruise control. The Urvan does get keyless entry, something that the Hiace, strangely, doesn’t have.

To be fair, however, Nissan has yet to update the NV350 Urvan Premium since its launch, so they could be working on the next iteration as we speak, and with the introduction of Nissan Intelligent Mobility in their bestsellers, it isn’t a long shot that the Urvan will be updated very soon. Both vans get a standard set of two front airbags, with the Hiace getting a center airbag in the commuter variant. Both also have ABS with brake assist, a security alarm, and electronic door locks. Where the big difference comes in is in the amount of additional safety features and technology the 2019 Toyota Hiace brings to the table. There are three-point seatbelts available for all passengers, hill start assist, stability control, and speed sensing door locks in the Hiace, making it the safest van in the segment to date. This is where it gets tricky. At their most base varians with a focus on maximizing passengers, the Nissan NV350 Urvan 18-seater comes in at P1,449,000 and the Toyota Hiace Commuter Deluxe comes in at P1,590,000. The Urvan carries three more people at this point, bringing the total to 18, while the Hiace can only carry 15. You do get a more powerful engine in the Hiace across all variants, offering a 2.8L with 176 hp and 420 Nm of torque compared to the Urvan’s 2.5L with 129 hp and 356 Nm of torque, which is also the standard engine. You also get a six-speed in the Hiace instead of a five-speed in the Urvan. Will you pay more for more power and an updated cabin? Or are you okay with saving P141,000 and have the ability to carry three more people?

Moving up to the top trim levels, the Toyota Hiace’s price gap increases, bringing the total to P2,220,000 compared to the P1,836,000 price listing of the Nissan Urvan; that’s a P384,000 difference. But the advantages, in reality, are made clearer – for more money, you do get class-leading safety and performance figures, and a nicer set of creature comforts to boot. They say that you can’t put a price on safety, and if you ask us, any buyer with a family will go with the most comfortable and safest offering on the market. Don’t get us wrong, though, the Urvan still proves to be a good choice in the van market, it’s just that it’s getting a little bit longer in the tooth.