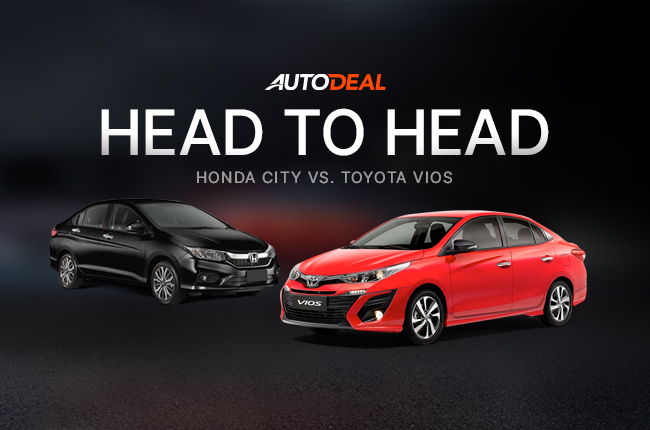 When it comes to subcompact sedans, two of the most common nameplates in the Philippine market are the Toyota Vios and Honda City. Not only are they long-established, but they also are among the best-looking models – no wonder why people often see the two as sworn rivals. With that context, we thought maybe we could detail out both cars’ specifications and differences.

If this is your first time reading an AutoDeal head-to-head article, it’s where we put one model against one of its closest rivals – a car comparison, so to speak. However, we don’t expect one to vanquish the other in terms of which spec sheet is better. The aim is to determine which model best suits a buyer’s needs by weighing both vehicles’ strengths and weaknesses. So, without any delay, here’s a detailed comparison between the top-range Vios and City, which are the 1.5 G Prime CVT and 1.5 VX+ NAVI CVT, respectively. Both Toyota and Honda explored different areas in architecting their subcompact sedans. The City follows Honda’s current design language that is also seen on its bigger siblings, while the Vios possesses a frontend similar to the current Yaris model. The headlights, grille, and bumper design of the City gave it an impression of a sporty daily driver and the Vios, on the other hand, has these huge wraparound headlights that look as if they’re squinting toward the observer.

Further, the City has more creases, making the exterior lean more on the crisp side, which is the opposite compared to the curvy and fluid sculpting on the Vios. You may also observe this on the side profile; the Vios has these bulging bumpers, whereas its rival has pointy edges. The same goes with the rear, as the Vios exhibits more curvatures than creases like the City. 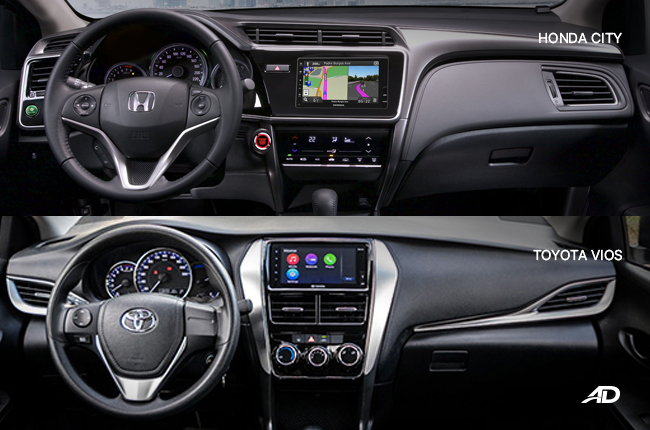 The huge difference between the City and the Vios is their seating material. For the record, the City 1.5 VX+ NAVI CVT’s cabin is wrapped in leather, while the Vios 1.5 G Prime CVT uses fabric. Now, there isn’t really an issue here, as there are those who prefer fabric over leather as the former does not heat up easily after parking under the sun for quite some time. The only thing that’s going to be an issue is if you like the Vios but prefer leather seats rather than fabric.

The difference does not stop there, the cabins of these rivaling Japanese subcompact sedans are like two different worlds. Air-conditioning vents inside the City are located high on the dashboard, above the seven-inch touchscreen unit. In contrast, the Vios’ A/C vents sit in between its seven-inch touchscreen and the A/C dials. Speaking of climate controls, Honda’s subcompact sedan features touch panel controls. This is obviously high-tech, compared to the Vios’ rotary dials but soft-touch controls could also cause minor inconvenience especially while driving if you’re not used to it. Locating where to touch in able for you to adjust the thermostat or fan level could be a bit of a challenge on the road.

What about safety and technology features? We know you want us to weigh the number of goodies found inside the two tightly-competing subcompact cars and by goodies, we mean technology. But before we proceed, let’s establish the price difference. The Honda City 1.5 VX+ NAVI CVT is posted at P1,059,000, while the Toyota Vios 1.5 G Prime CVT has a price tag of P1,095,000. Clearly, the Vios is more expensive than its rival but is it justified by its features? Let’s find out.

Starting with the basics, both the Vios and the City offers high-quality safety. The Vios has dual front, curtain, and driver knee airbags. The City, on the other hand, lacks knee airbags but features side airbags. Both models are equipped with an anti-lock braking system with electronic brake distribution, engine immobilizer, security alarm, stability control, and hill-start assist.

However, you might think that there are more toys in the Vios, considering its higher value as compared to the City. It might not be the case actually because by matching the spec sheets of both models, we found a few technological features missing in the Vios that are present in its rival. Among the few items that the Vios does not have are cruise control, rear parking sensors, and GPS navigation. It also has fewer speakers, which is six, versus the eight found around the City’s cabin. Considering the gap in features, the price range of the Vios is a bit overwhelming. The P36,000 price difference is actually a lot, even if we agree on the Vios being a newer facelift. If we compare the engines, both cars carry their brand-respective 1.5-liter engines; Dual VVT-i on the Vios and i-VTEC on the City. Oh, comparing the engines could also cause trouble for the Vios, especially when we take a look at the performance output.

The two cars utilize a continuously variable transmission (CVT) but the City spurs out more power compared to its rival. On paper, the Honda City has maximum power and torque of 120 hp and 145 Nm, while the Toyota Vios has 106 hp and 140 Nm of torque. Clearly, the City overpowers the Vios by 14 hp and 5 Nm of torque on paper.

By basing on the findings above, we have to say that the Honda City’s value for money is a little better compared to its competitor. However, we do know that servicing and a lot more factors after your purchase may also play a role in determining which model is better for you over the other, so there’s that.