Specs-wise, the Isuzu D-MAX had a hard time beating its rivals. However, that did not stop Isuzu’s midsize pickup from achieving success prior to the new model. The Philippine market has had the prior-generation D-MAX since 2012 and the model—while still strong and reliable—has fallen behind when compared to other rival models in the market.

It appears that’s not the story anymore. Specs-wise the 2021 Isuzu D-MAX holds up and even beats other models in the segment. Isuzu has produced a model that is heaps better than the generation that it replaces, but how does it stack up against its rivals?

We'll be taking a look at the Isuzu D-MAX next to its competition. While there are many other rivals in the segment, the main competitors include the Toyota Hilux, the Ford Ranger, The Nissan Navara, The Chevrolet Colorado, and the Mitsubishi Strada. The first metric that is usually compared between pickups is the engine. In pickups, the more important metric to follow was torque, and more horsepower was just an added bonus. Frankly, the previous-generation fell short in this area. Thankfully, Isuzu has remedied this problem with 187 hp and 450 Nm of torque from the 3.0-liter turbodiesel engine. Isuzu finally breaks the 400 Nm barrier with its new D-MAX, but the competition has been sitting above the 400 Nm mark for quite some time now. The previous-generation Toyota Hilux had 450 Nm of torque out of its 2.8-liter turbodiesel engine, matching the current output of the D-MAX. However, Toyota is now up on power and torque with 201 hp and 500 Nm with the same 2.8-liter turbodiesel motor. Nissan matches Isuzu spec-for-spec with the same 187 hp and 450 Nm output from its 2.5-liter turbodiesel motor. The Navara is no slouch with its figures, and the D-MAX isn’t either. It’s interesting to see that Nissan is able to get the same figures. Chevrolet’s pickup, the Colorado, used to be called the king of torque until its rivals caught up. With 200 hp and 500 Nm on tap, the Chevy may not be the most powerful, but it still has a leg up on Isuzu by 13 hp and 50 Nm. Mitsubishi is now the underdog in terms of power with its Strada. The 2.4-liter MIVEC Clean Diesel engine is a more modest engine compared with its rivals, producing 179 hp and 430 Nm of torque. The saving grace of this engine is that it is available on all trims of the Strada, whereas the more affordable variants of the D-MAX come with the RZ4E, a 1.9-liter turbodiesel engine that produces 148 hp and 350 Nm of torque.

The D-MAX is now nestled nicely in the middle of the pack in terms of power and torque. The engine is better than before, and it promises real top-of-the-line specs. Isuzu has caught up to the rest of the industry with regard to their numbers, which can only benefit the customer. The interior of the D-MAX is new and worlds away from the previous generation. It’s a worthy upgrade and one that makes its rivals look more rugged than refined. The Toyota Hilux hasn’t gotten a substantial upgrade over the years. It’s been the same story for Toyota ever since, and the interior is starting to show its age. When put up next to the D-MAX, the cloth seats hold the Hilux back from feeling more premium, while the D-MAX kicks things up a notch and gives us a full interior with brown leather all over and a bigger infotainment screen. Ford’s Ranger is also starting to show its age. While it did have some of the best fit and finish in its class, the D-MAX feels all sorts of premium and sturdy. The Ranger uses a lot of premium and less than premium materials in the form of hard plastics, which are acceptable until we got to try out the D-MAX. While the Nissan Navara has a sturdy-looking interior, the styling is quite bland when put up next to the D-MAX. And while we didn’t knock on the feel of the buttons, seats, and dash, the D-MAX just puts up a better fight. Perhaps the equalizing factor would be if Nissan was able to outfit the Navara with the chocolate brown leather of the Terra, but that’s not the case for the current generation Nissan pickup. The former platform-mate of the D-MAX, the Colorado, has a somewhat dated interior. At least for the top-spec trim, you get brown leather seats as pictured. The overall design is still on the older side. Since Chevy and Isuzu collaborated in the past, the Colorado looks somewhat similar to the old D-MAX. The differences now are night and day, and the D-MAX has left Colorado in the dust, at least in the interior department. Though, it would be unfair to write off the soft-touch materials on the dashboard of the Colorado and the accent stitching in the High Country Storm variant of Chevy's truck.

The much-lauded interior of the Mistubishi Strada looks like it is in need of a splash of color. While we are still fans of the design of the Strada’s cabin, it lacks a certain flair that the D-MAX has, thanks to its brown leather seats and capable 10.1-inch infotainment system. The steering wheel also looks sharper and way sleeker compared with the Mitsubishi that evokes a more utilitarian vibe.

In short, we’re thoroughly impressed by the D-MAX. The interior of the pickup is definitely something to write home about, plus it got the attention of Mazda, enough for them to make it a base for their next-generation BT-50. As for tech, we’re glad to see Isuzu ditch its old infotainment system in favor of a more attractive and functional piece. Apple CarPlay and Android Auto are standard for the LS-A, and it’s a very competitive infotainment package especially with its 8-speaker setup.

The Hilux got an upgrade for the 2021 year model, but the infotainment grew by just an inch over the pre-facelift model. At 8-inches, the Toyota’s screen pales in comparison with the D-MAX's10.1-inch unit, but you get the same functionality with Apple CarPlay and Android Auto, as well as a backup camera with sensors. The Hilux falls short having 2-less speakers than the D-MAX. Moving on, the Ford Ranger’s infotainment package features Ford’s SYNC 3 OS and its screen is still shy of the Isuzu’s by 2.1 inches. The 8-inch touchscreen infotainment unit in the Ford is capable and has a reverse camera installed along with Apple CarPlay and Android Auto, but you’ll still be left with just 6 speakers. 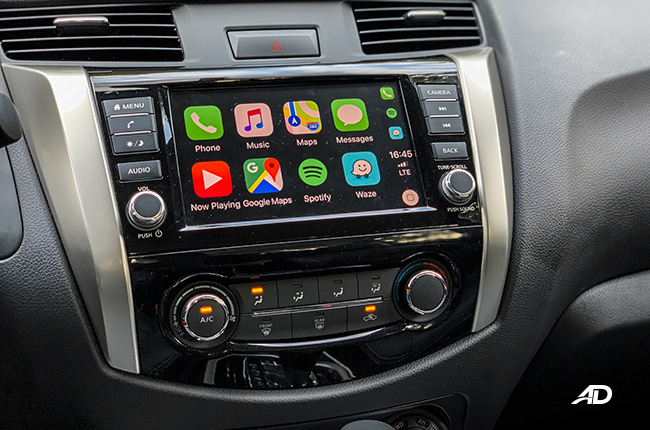 The Navara may not have a leg up on the D-MAX with the number of speakers it has or its display size, but it does have Nissan’s famous around-view monitor (AVM), which makes parking and driving a big rig an absolute breeze. The infotainment unit is still fully featured, but it seems that Isuzu missed an opportunity to include a 360-degree camera for the 2021 D-MAX. Chevy, on the other hand, was one of the first to include Android Auto and Apple Carplay, but no updates have been made since. The Colorado’s infotainment is still fully featured for 2021, but it lacks the extra wow factor that many manufacturers are going for with their new models. 6-speakers and a 7-inch screen aren’t impressive numbers anymore, and the old standard is starting to show its age. The Mitsubishi Strada has the most dated infotainment system in the segment. It has a sub-7-inch touchscreen and only Bluetooth, USB, and AUX connectivity with no Android Auto or Apple CarPlay. While it is still enough for your needs, the screen of the Strada isn’t too nice to look at when placed next to the D-MAX's. We wished that Mitsubishi would give its pickup an infotainment update similar to the Montero Sport. If Mitsubishi did, it could give the D-MAX a run for its money in the infotainment department. We’ve seen similar kits applied to other models like the Ford Ranger, the Mitsubishi Strada, but for the rest of the competition, we’re seeing more passive safety features. So far, the Ranger and the Strada can be considered on par with the Isuzu in terms of active safety tech, while the rest of its rivals meet standards, but fail to impress. We’re thoroughly impressed with Isuzu on many fronts. For starters, the D-MAX is undoubtedly beautiful inside and out. The rest of the competition aged by a significant amount ever since we saw the D-MAX. The interior is among the best that we’ve seen in a pickup, while the engine is decently tuned to make a lot more torque. The infotainment package is also quite a joy to use, and it eclipses other pickups by a substantial margin. Safety is now on par with the leaders in the segment.

Isuzu pulled out all the stops to help it get out in front of the pack. We sincerely recommend that you check out the D-MAX for yourself because it’s something special this time around. Specs-wise, it looks very promising, and it looks like it is going to be one of our top pickup trucks for 2021.