Pickups are undoubtedly robust and can accomplish a myriad of tasks but usually at the expense of comfort, style, and luxury. Where other trucks fall short, The Ford Ranger’s here to tick all the boxes once again for a truck that can transition from asphalt to dirt seamlessly. Whether it’s on road or off of it, Ford’s Ranger leads the way. 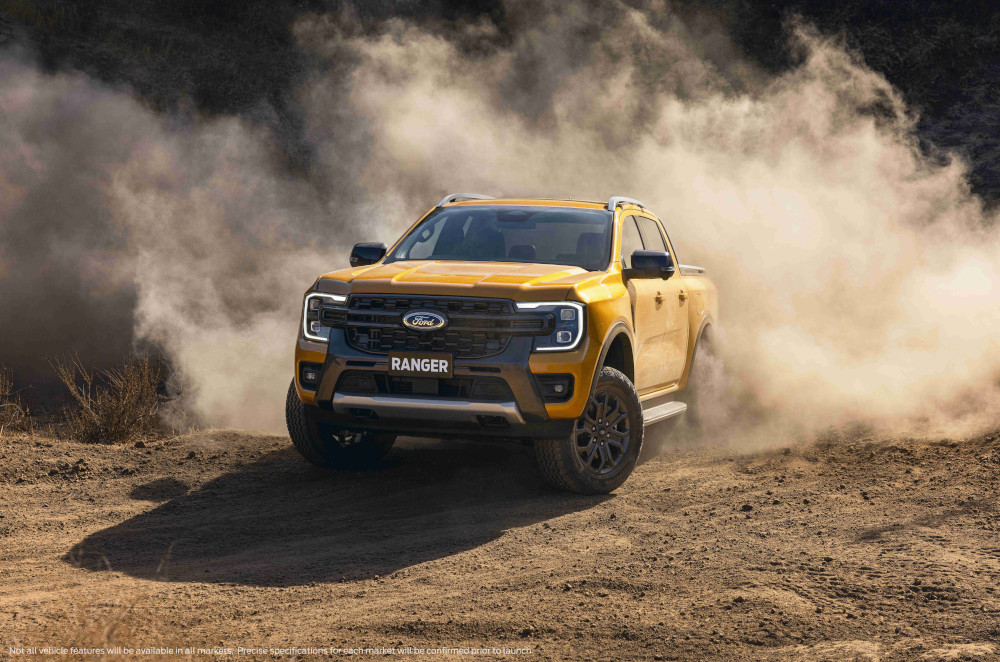 Walking up to the new Ranger, you feel as if you’re ready to embark on an adventure through the city and even beyond it. The Ranger’s exterior styling feels at home on the roads and high streets or through hell and high water. Other pickup trucks exude a sense of ruggedness at the cost of elegance, but the Ranger has the best of both worlds. Ford’s design strikes a balance between ruggedness and elegance at the same time, borrowing elements from its best-selling pickup truck, the F-150 which is yet another model we wouldn’t mind seeing in a shopping district or out on the trails. On top of that, the Ranger inches ever closer to the wideness of its bigger brother. The new chassis grows in width and wheelbase giving it a more muscular appearance that also helps it remain stable. You can’t talk about lifestyle and cars nowadays without at least mentioning technology features and like the infotainment system. After all, in our hyper-connected world, it pays to be on top of things while you drive. The first thing that will jump out at you in the Ranger’s interior will be the massive infotainment display, and it can be had in either 10.1 or 12-inch sizes depending on the variant you get. The massive screen is a joy to use, and it effortlessly displays your maps, caller information, music, and even the 360-degree camera. Ford calls it Sync®4A, and the brand’s new software gets even better with its fourth iteration.

On top of that, there is also a fully-digital gauge cluster that matches well with the large screen in the middle of the dashboard. Just like the infotainment system, the cluster is connected and can change what it displays depending on what you need. While your eyes are being treated to a myriad of displays, your body will be cradled in retooled seats which are all optimized for comfort. When all is said and done, it’s still a pickup truck but not one that comes with a ton of tradeoffs. Instead of being uncomfortable and unruly to drive, the Ranger remains refined and planted over bumps in the city, making it an excellent city slicker for any hangouts or dates. Don’t let its refinement deceive you, however, as it is one of the most capable 4x4 pickups out there with some of the best driving dynamics in its class. Now with selectable drive modes, you can optimize the Ranger’s performance depending on the surface you will drive on or what you’re hauling behind you, and those modes include Normal, Eco, Tow/Haul, Slippery, Mud/Ruts, and Sand for off-road use. Let the Ranger take you places you've never been before, further from the confines of your comfort zone. Take it camping then take it to your next business meeting. You know it can do it. The modes touch the transmission, traction controls, stability controls, and ABS to deliver optimal performance on any terrain. It doesn’t matter what kind of roads lie ahead, there’s a mode for any road. Even with all of these amazing features in mind, one cannot forget that big bed out back, and the fact that Ford is consistently innovating on storage solutions and cargo carrying capabilities. Aside from being a large space for you to put just about anything, the rear bed of the new Ranger features a Rear Load Box Access Step, which is a godsend for loading and unloading cargo. There is also a new Cargo Management System at the back that you have to try for yourself.

Every aspect of the Ranger’s now even better, and it’s prim and proper while being able to get down and dirty when the situation calls for it. Is this a trait that is unique to the Ranger? Quite so. Consider that few pickups are this equipped and this capable out of the factory all with a name brand to boot. Ford’s known for its pickup trucks, and the brand wishes to keep its reputation going for this generation of its best-seller.

Now that the next-generation Ranger is here, however, the game has once again changed, and Ford is bringing its best technologies and features to its best-selling pickup truck in the Philippines. The lineup is also in full force once again, as the Wildtrak, Sport, XLT, XLS, and XL will be making an appearance for the Next-Gen model. The top-spec Wildtrak is set to wow buyers with its myriad of features, while the Sport will cater to the mid-range market, and the XLT, XLS, and XL will offer consumers a budget option that can get work done and still have enough features on the side. On top of that, you can attain a Ranger and peace of mind thanks to Ford's Five-Year Warranty that's included with every purchase of the Next-Gen vehicles. The Blue Oval's committed to delivering a seamless ownership and driving experience with its cars, and the warranty period is nearly double the industry standard of just three. You can drive your Ford with peace of mind for years to come.

Don’t forget to inquire about the new Ranger through AutoDeal, and get the best deal through our platform.

Produced in partnership with Ford Philippines