Sport Utility Vehicles (SUVs), the choice for those who want a large vehicle that comes with a 7-seater capacity, high ground clearance, a ladder frame chassis, and the option of 4x4 capabilities. These vehicles often come with turbo-diesel engines with high torque figures to help you get the most of your fuel you give them. With that said we created a list to help you understand which SUVs in the Philippines is the most frugal and drink the least amount of fuel.

In order for the vehicle to make it into the list, it must have a written review as these will be the basis on which the fuel economy figures will come from. As these are the results from our testing your actual results may vary, however, it is important to note that this is here to give you an approximation as to what you can expect from these vehicles. The list itself will be divided into three parts depending on the size of the vehicle. It is important to note that all vehicles on the list come with a ladder frame chassis to fit the traditional definition of an SUV, vehicles that come with a unibody chassis will not be considered.

The fuel economy figures for both the city and the highway will be added together and will be taken as points. If there are fuel efficiency figures for the vehicle with a different engine displacement then the higher figure will automatically be considered.  These points will be tallied, with all the vehicles included on the list being ranked from highest to lowest. In the event of a tie, the vehicle that has the higher city fuel economy figures will be the winner. With that said onto the list.

Related: Most fuel-efficient 7-seater vehicles in the Philippines 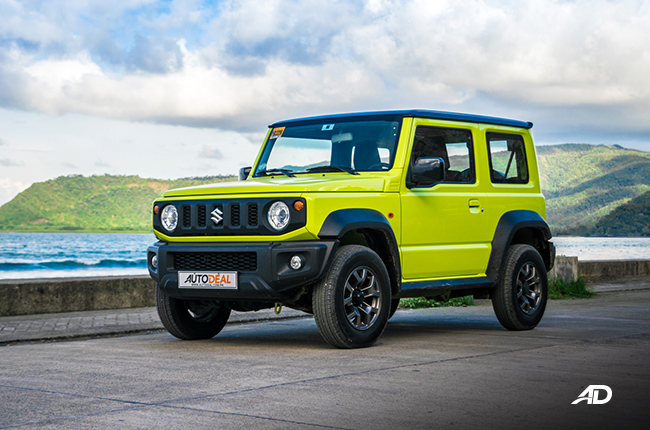 If you are in the market for a small compact off-road vehicle then your only option currently on the market is the Suzuki Jimny. The small SUV brings to the table mountain goat-like off-road abilities along with a feature-rich cabin all at a competitive price. While it does sport a boxy design, the Jimny does well to make the most out of the fuel you give it coming with 8.6km/L in the city and 17.6km/L on the highway. This gives the vehicle a total score of 26.2. Taking the top spot as one of the most fuel-efficient 7-seater mid-size SUVs on the market today is the Toyota Fortuner. It brings with it a frugal line of turbocharged diesel fed motors with each one returning impressive fuel efficiency figures. In its 2.4-liter configuration which is the engine of choice for the majority of its lineup, the Fortuner is able to return 11km/L in the city and 19km/L on the highway. This gives the SUV a total of 30 points and gives it the top spot.

It is important to note that in its 2.8-liter configuration it is able to return 7-8km/L in the city and 15km/L on the highway. This gives the Fortuner with the 2.8-liter motor a little bit less fuel economy than its smaller displacement variants. Regardless these are still very good numbers for the popular SUV.

A popular diesel fed vehicle to make it onto the list is the Ford Everest. Sporting a range of variants and a range of diesel motors to choose from, the 7-seater SUV is indeed an adaptable and competitive platform. While figures are not available for the single turbo 2.0-liter and 2.2-liter variants, the bi-turbo 2.0-liter does come with very impressive fuel economy figures. It returns 8.5km/L in the city and 18.9km/L on the highway, easily making it one of the more efficient SUVs in the local market today. The Everest is able to score a total of 27.4 giving it the second spot on the mid-size SUV list.

Following close behind is a Japanese SUV that is also a veteran of the segment. The Isuzu mu-X delivers well when it comes to its attractive price point as well as its line of frugal Blue Power turbo diesel motors. Even with one of the smallest displacement engines in its class the SUV is able to return excellent fuel efficiency figures. Its 1.9-liter engine is able to return 8.2km/L in the city and 18.2km/L on the highway totaling 26.8 points. An impressive feat especially for a vehicle with a relatively small powerplant.

For those who are curious, the 3.0-liter does a little bit less than its 1.9-liter counterpart, as it is able to do 7.1km/L in the city and 17.9km/L on the highway. Nonetheless, these are still good fuel efficiency figures for a large motor.

Another Japanese SUV to make it onto the list is the Mitsubishi Montero Sport. This popular 7-seater diesel-powered vehicle comes with a striking design that some may like while others may hate. Nonetheless, this SUV is well equipped and comes at a competitive price point. Under the hood, it is powered by a 2.4-liter turbo diesel engine that is able to deliver good fuel efficiency numbers partly thanks to its 8-speed automatic transmission. It is able to produce 7km/L in the city and 17.7km/L on the highway totaling 24.7 points.

An entry onto the list that you should consider is the SsangYong Rexton. The 7-seater diesel-fed SUV from the South Korean automaker brings with it a powerful diesel engine as well as one of the best interiors we have tested so far. It comes powered by a 2.2-liter turbo diesel engine that is capable of returning 7.5km/L in the city and 16km/L on the highway. This gives the vehicle a total score of 23.5 points just a few points shy of its Japanese rival but on par with the rest of the competition.

Another Japanese entry onto the list that comes well equipped and with a 7-seater capacity is the Nissan Terra. The Japanese SUV brings to the table a 2.5-liter turbo diesel engine that is capable of returning 7km/L in the city and 16km/L on the highway. Added together the popular SUV is able to get a total of 23 points. Respectable numbers that put it on part with the rest of its competition.

One of the older and seasoned veterans to make it onto the list is the Chevrolet Trailblazer. Much like the other entries onto this list, it too comes with several engine options to choose from. It comes with a 2.5-liter turbo diesel and a 2.8-liter motor. While we don’t have the fuel economy figures for the 2.5-liter model, we do have the numbers for the 2.8-liter model. The bigger displacement engine is able to crank out 7km/L in the city and 14km/l on the highway. Decent figures for the vehicle, however, it does fall a little bit shy compared to what the other vehicles on this list have to offer Moving into the realm of large SUVs, one of the choices you have in the Philippine market today is the Ford Expedition. This land yacht comes powered by a 3.6-liter twin-turbo V6 gasoline engine that is more than capable of bringing the vehicle up to speed and is even capable of towing a heavy load. With such a big motor under the hood, fuel figures aren’t exactly the best as it churns out 5km/L in the city and 10km/l on the highway. This gives the large barge a total of 15 points.

Following close behind the Blue Oval-badged vehicle is an equally large and in charge vehicle, the Nissan Patrol Royale. This large Japanese SUV brings natural aspiration to the table with a massive 5.6-liter gasoline engine that gives it a hefty but linear grunt. A good match for a vehicle of its size, it is able to return 5km/L in the city and 9km/L on the highway. While not the most frugal options out there it does come close to its US rival, and for a vehicle of its size and the luxuries, it carries it is to be expected.