We didn’t go wheel-to-wheel against Troy Montero. We didn’t bash bumpers with Gerald Anderson or Chie Filomeno. Aubrey was a few Miles away from where we were.

I got to race in the 2019 Vios Autocross Challenge. This was my first leg, and the first time I ever attended a Vios Cup or Vios Racing Festival – ever. It was a new experience for me, but I was doing more than just spectating the event. I was to sit in the driver’s seat and set the best possible time I could with the Toyota-provided vehicle. At the end of the day, the results were sort of magical. This was my first official autocross event. I had previously locked in some seat time in practices and training seminars, but nothing officially timed via a set of radar detectors. The competition that I used to participate in was of the learning variety, meaning that we were hooning around for education and not for a prize.

Safe to say, but I was one of the greenest of the bunch. Other people in the media category have long been a part of the industry and have at least some experience. I was filled with questions that I would have to figure out for myself during the practices.

We had our driver’s briefing that told us all about the track layout and rules. Autocross involves an obstacle course of cones and barriers that you have to drive through as quickly as possible. If you cut the track, get lost, or hit a few cones, either you get added time or don’t get the chance to finish your run resulting in a DNF. You don’t fight anyone for a position. You race against the clock. 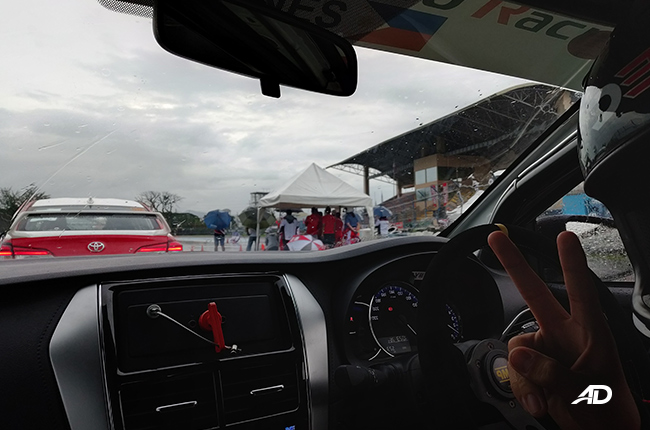 Toyota made sure that we were well-kitted. They provided us with helmets and racing suits. Most autocross events only require you to wear a helmet, pants, and a T-shirt, but this time around it was an official event and we needed to look the part and be protected at the same time. I was unsure of what I was supposed to do in the practice sessions. Some say that it’s better to wing it, then improve later. Others told me to take it slow, and take everything in. Meanwhile, I was just excited to get into an actual Toyota Vios Racing Festival car. While it wasn’t my first experience being in one of these machines, it was my first time on track with one.

Related: What’s it like to drive a Vios Cup Car on the road 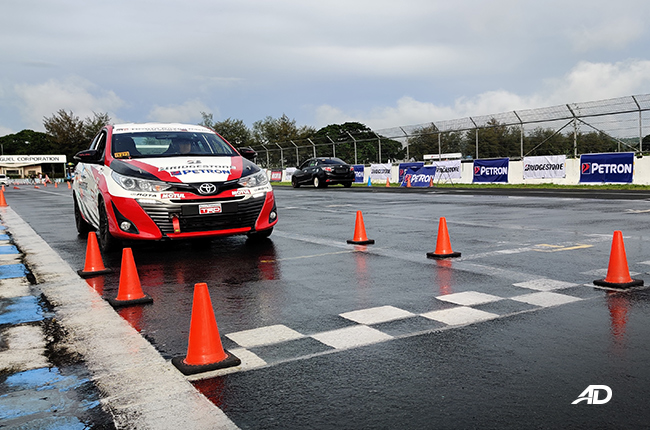 I messed up almost all of my practice runs. In one stint, I almost hit an obstacle. In another, I mowed down four cones because I was going too fast trying to make a turn. Things were not looking good. While others were able to achieve times around the 55-second mark, I was producing minute-long runs, which put me in the back of the pack. Nobody could have expected what happened next – not even me.

During these practices, I sought advice from others. The air was not competitive. It was laidback and everyone was friendly. We talked about the track layout, proper things to do in the turns, and even some stuff about one of the cars being cursed. 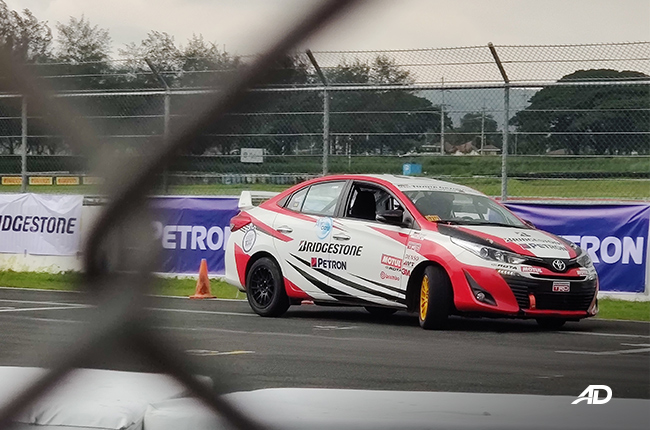 Toyota’s number 10 Vios was not a media favorite. Units 9 and 1 were basically flawless, but unit 10 was plagued by several issues. The car didn’t slot into first gear as seamlessly as the other units, plus there was exhaust rattle at low RPMs. During the practice sessions, one of its tires got flat, the seat rails jammed from time to time, and to top it all off it, had an ant infestation. So with practice out of the way, the competition was up, but about 20 members of the media waited for their turn to blaze a trail on track. Three cars were fielded, which included Vios number 10.

I squeezed into the driver’s seat of car number 9. I buckled up and braced myself for the lap I was about to do. I was given a few moments to calm myself down from all the anxieties that plagued me during the practices. I visualized the track ahead of me, taking every corner and obstacle in my head. It worked. I made it into the semi-finals; only 10 individuals were able to reach this point. I was initially looking for my name at the bottom of the list, but to my surprise, I was second – top three qualifying. So there I was, in a state of serendipity and bewildered bliss. I figured it out. I heeded the advice of the other racers and calmed down. I realized that just because you’re pushing hard, doesn’t mean that you’re faster. It just feels faster because you’re putting more effort than you need. The best way to win is to be smooth and deliberate with your actions. Being purely instinctive on track isn’t going to help either, as you need to also be smart and think about your next moves before you make it.

This cold calculation got me into the semis, but we had to face a different challenge, the rain. 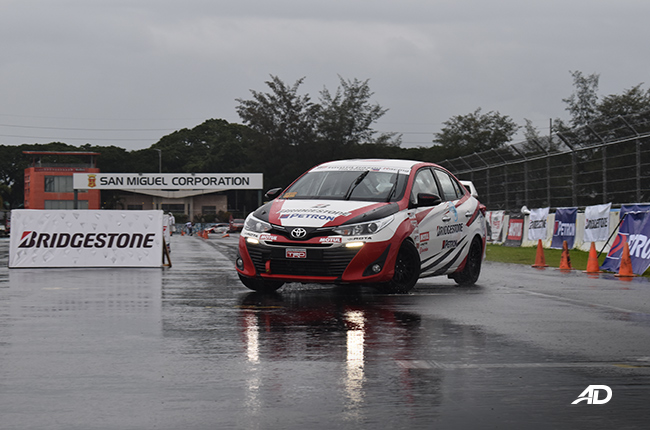 A wet track made for an interesting result. It rained during the semi-final which made everyone nervous behind the wheel. As stated by one of the contenders, “rain is the great equalizer.” It does not matter if you are the fastest in the dry, you’d have to adjust your racing lines because water is the enemy of grip.

Related: Why do you need to control your speed when driving in the rain?

This round still shocked us, since the best performing driver netted the same time as he did in the dry. Meanwhile, everyone got slower, and the rain caused me to hydroplane and lock my wheels causing me to overshoot a few cones, giving me only one registered time. Even though I messed up, I still made it to the final. Everyone got slower by about three seconds, while I kept mildly consistent. I was in the top four contenders and was in sight of a podium finish. The rain kept me on my toes and I had vowed to not mess up like last time. I adjusted accordingly and made sure that I would beat at least one of the participants and get third.

The circuit racers went out first and gave us some time to rest and collect ourselves after two rounds. The wet track caused many accidents, but thankfully nobody was hurt. I was scared because the rain had increased in intensity since we were last out on track.

After the circuit event came to a fantastic conclusion, we were called out once again. Four drivers would come out and only three would be chosen to stand on the podium. I gathered myself, took everything that I learned, and stepped into the “unlucky” car, the infamous number 10. Of all the cars I would be assigned to, number 10 was to be my steed in the final battle. I’m not the most superstitious of the bunch, but being in number 10 made me nervous, but these few words rang in my head while waiting for my turn: “Drive better than your car.” 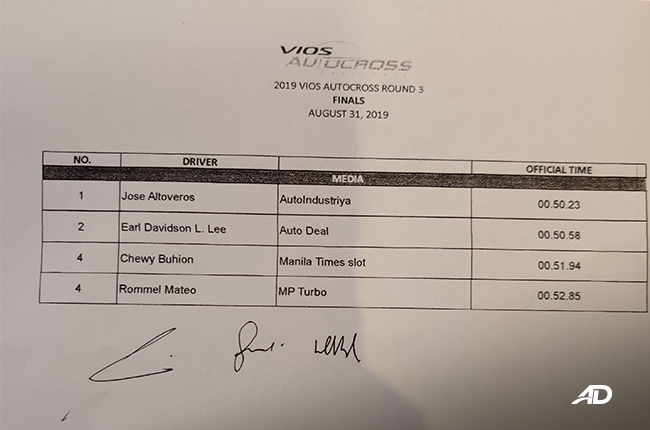 Look ma, I made it. I placed second!

I ended up getting second place. It’s still a win in my book. The first-place finisher is a friend of mine who gave me tons of advice going into the competition. He was also the previous round’s champion, so finishing three-tenths of a second behind him is an achievement in itself.

You could say I got lucky, but I could say that I was blessed to be surrounded by people with sound advice and good intentions. There is a reason why autocross is possibly one of the best ways to get into motorsport. It’s a game of precision, but you’re much safer than the circuit racers going at higher speeds and in a pack. The price for admission isn’t as steep and the event can be had in close proximity to the city.

Thank you to Toyota Motor Philippines for having me in the Autocross challenge. It taught me more than I had hoped for, and I’ll take what I’ve learned into my profession. I’ll leave all the hooning and shenanigans on track, where it’s safe. If someone as new to motorsport can make it to the podium, perhaps you can. Keep your wits about you, and don’t get too excited. Think of your moves, do your homework and study car dynamics, then leave it all out on track once your theory is good enough.