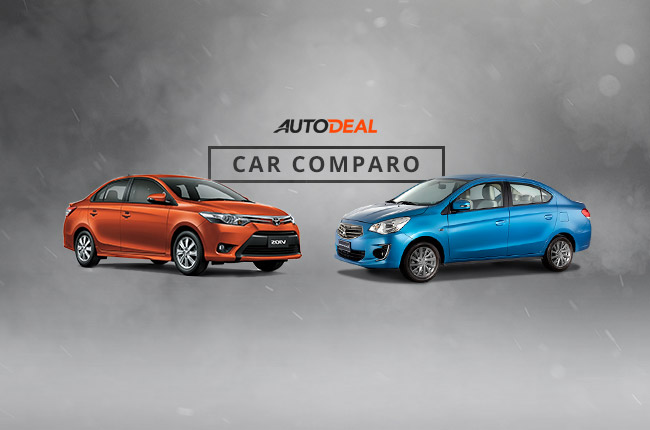 The Philippine automotive industry offers a wide selection of vehicles that would fit the local market’s diverse lifestyle. For this comparo, we look into two subcompact sedans – Toyota Vios and Mitsubishi Mirage G4 – and see which vehicle is the better transporter for a typically small Filipino family of 4 or 5.

Of note, we would be comparing the base variants of the Toyota Vios and the Mitsubishi Mirage G4 for this battle. The tale of the tape starts by looking at the prices of each vehicle.

The Mitsubishi Mirage G4 claims this category with its lower P563,000 price tag as compared to the Toyota Vios’ P592,000. If you do the math, the Mirage G4 is priced P29,000 lower. The price difference of the two vehicles are relatively small but if you come to think of it the Mirage G4 gives you around P30,000 more in savings.

However, comparing the price isn’t enough to make you decide which vehicle to choose. So, we move on and look at what’s under the hood. 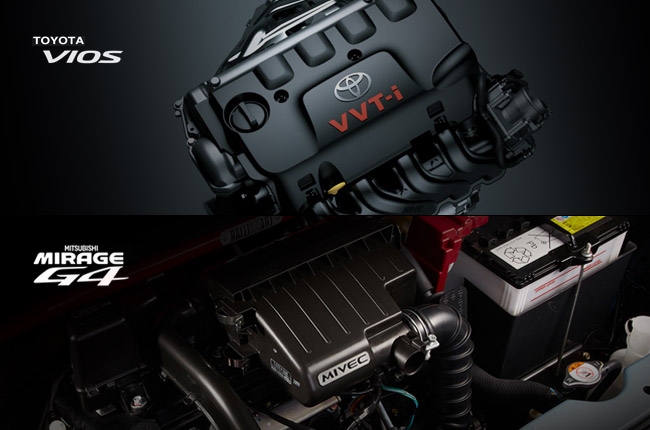 The Toyota Vios and the Mitsubishi Mirage G4 are both mated to a 5-speed manual transmission. However, there’s a notable difference with its power units. The Vios is powered by a 1.3L engine while the Mirage is equipped with a 1.2L engine. With this, it’s a dead give-away that Toyota’s subcompact sedan would edge out this category.

The Vios delivers 85 hp and 122 Nm of torque while the Mirage G4 generates 76 hp and 100 Nm. As the number suggests the Vios has an added 9 hp and 22 Nm of torque. This means that it is quicker and has more torque pull than the Mirage G4. However, you might not feel the power difference if you’re driving around the city. The Vios’ additional 9 hp can be felt more likely when you’re cruising at an open road.

With its larger and more powerful engine, the Vios squares out this comparo. 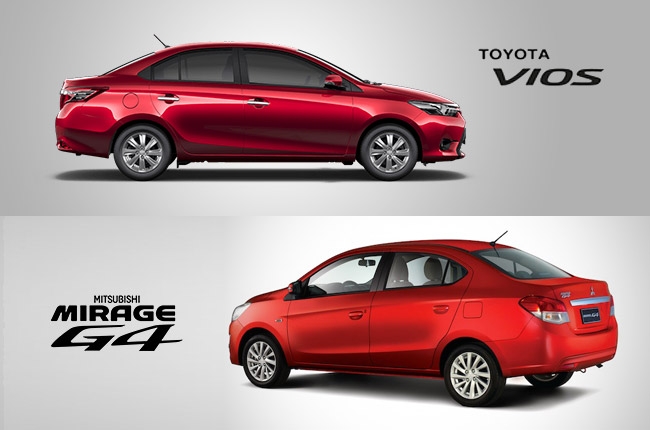 Dimension-wise, the Toyota Vios measures 4,410mm long, 1,700mm wide, and 1,475mm tall while the Mirage G4 is 4,245mm long, 1,670mm wide, and 1,515mm tall. Looking at the numbers, the Vios is longer and wider by 165mm and 30mm respectively while the Mirage G4 is taller by 40mm. These numbers give you an indication that the Vios has a slightly bigger interior, which is an important thing to consider if you plan to use it as a family car. The slight difference in the cabin allows the Vios to take a 2 – 1 lead over the Mirage G4.

The dashboard of both vehicles gives the cabin a classy feel which is a good thing considering that these are base model variants. In addition, the Vios and the Mirage G4 both have a manual air conditioning system, a power steering and power windows. Overall, the interior features of both vehicles do not have significant difference. Your personal preference will be the key in deciding which has a better cabin.

Toyota and Mitsubishi equipped the base variants of their subcompact sedans with essential safety features. The Mitsubishi Mirage G4 has a driver’s airbag and an immobilizer, an electronic device that prevents the engine from running without the correct key. The Toyota Vios, on the other hand, comes with driver and front passenger airbags.

We can’t tell who’s the outright winner in this category because the safety features of each vehicle have its own pros and cons. The Mirage G4 might only have 1 airbag but it makes up for it through the immobilizer. Meanwhile, the Vios have 2 airbags which would be beneficial should you be involved in an accident.

So, which is better? The way we see it, both the Vios and the Mirage G4 are integrated with features that could suit your family’s transport needs. If you want more power, the Vios is the vehicle for you. On the other hand, if you want to save more money, while still getting a decent car, then the Mirage G4 fits you.

If you want to compare these two vehicles, visit the AutoDeal Comparo Tool.