The Jaguar F-Type Coupe is such a desirable car that a simple in-city test drive would have sufficed our desire to get our hands behind its wheel. However, Jaguar Cars, Inc. (JCI) invited us to spend a day and try it out on its natural habitat – the race track.

The 4.2 km Clark International Speedway was our testing course, and we had no idea what we were about to experience. 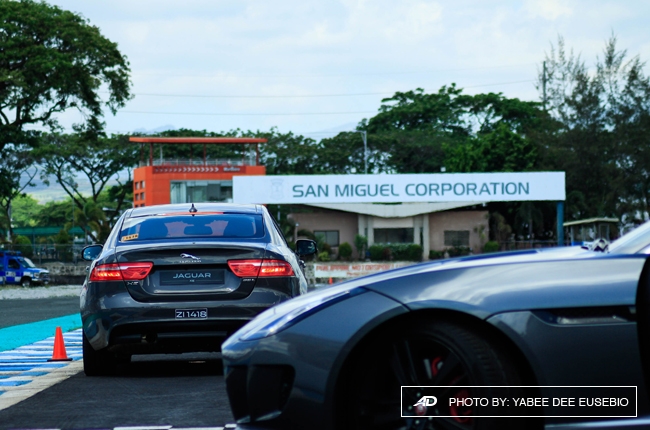 Before we headed onto the track, we had a chance to stare and marvel at this beautiful machine in front of us. It’s a perfect mix of class and aggressiveness, with its curvy edges neutralizing its fierce nature. It's aerodynamic – with a wide and low stance along with curvy contours and long hood. It also has a retractable rear spoiler that adds downforce at high speeds.

Its engine was idle but it looked fast standing still. This made us want to test the car right away.

Though we weren't rookies in driving luxury or sports cars, this was our first time we'll drive a Jaguar on a race track. The activity was divided into three types: braking, acceleration, and lapping. We drove both the F-Type Coupe S on two testing courses for braking. The first was a 100-m straight course, while the 2nd was the “brake and evade” test. Both simulate emergency highway situations wherein you have to stop abruptly for an imminent accident.

The instructions were simple; step on the gas pedal as hard as you can and then slam on the brakes on the cone markers. On the second course, we had to evade an oncoming obstacle; the same as what you would do in an actual accident.

The initial round was with the F-Type Coupe S, which runs on a 3.0L V6 engine with a maximum output of 380 hp and 540 Nm of torque. The fear of hitting the cones made the experience nerve-wrecking, but the F-Type’s huge brakes gave us immediate confidence with the car. This made the second course much easier. In the acceleration test, a full 400-m straight course was setup with only one instruction given – push the pedal to the metal. This got us really excited as F-Type’s most powerful variant, the 5.0L V8 Coupe R, is the next car we’ll test. With 550 hp and 680 Nm of torque, this beast can go from 0 to 100 km/h in 4 seconds. You could only imagine how eager we are to get behind the steering wheel.

It was a rolling start and the moment we started accelerating, the intense pull made our heads press against the headrest while experiencing the F-Type's full power. The engine roared to life when we opened up the throttle, and the 8-speed QuickShift transmission living up to its name with abrupt upshifts. It was exhilarating enough that we haven't had the chance to peek at our top speed during the test.

We had two rounds to do it and both were enough for us to be blown away by the power of the F-Type Coupe R. 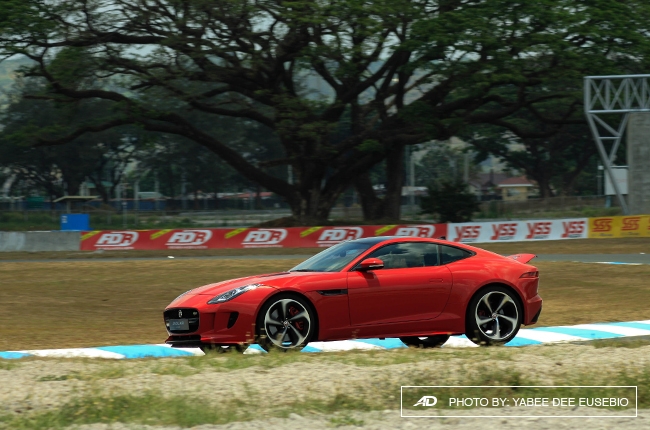 The objective of the lapping course is for us to experience the Jaguar F-Type Coupe in a full lap on a race track.

The Jaguar F-Type Coupe was able to take the turns easily with minimal body roll. We were able to follow the markers for the racing lines with its agility and it made us enjoy corner after corner after corner. However, the straights was a different story as there’s a sense of liberation felt in pressing the pedal to the metal.

Whether you choose to paddle shift or let the car change gears by itself, the upshift and downshift were both seamless and on-point. We were only given a lap with the F-Type Coupe on track. Although, an additional lap could have given us the chance to run the course faster.

The whole experience has proven that the Jaguar F-Type Coupe is one furious cat that’s made to run on a race track. If you're planning to buy one soon or in the near future, we strongly recommend that you take it on the track to experience its full potential.

For more information about the Jaguar F-Type Coupe, visit the AutoDeal Car Guide.

You can compare quotations simultaneously from multiple Jaguar dealerships. Select your preferred dealers from the list below.

Get Notified about Jaguar Deals