I think we can all agree that jeepney modernization or more aptly called PUV Modernization Program (PUVMP) of the government is a sensitive topic for Filipinos. So much so, that it has sprung numerous nationwide protests from drivers and operators for the past year. Well, who can blame them; driving jeepneys is their main source of livelihood and taking that away means less food (or none at all) for their families.

In short, jeepney driving is an essential part of their daily lives. It is only natural for them to fight for what they believe in, especially if that entails theirs and their family’s survival.

However, what’s really in store for the jeepney drivers and the (riding) public when it comes to these modern jeepneys? If PUVMP continues to push through, what will the commuting public get from it?

Hino Motors Philippines (HMP), one of the providers of modern PUVs, let us experience, both as passengers and drivers, the brand’s modern jeepney prototypes. Although the affair was brief, it made us realize things — things that every Filipino should think about. Hino’s modern jeepney is available in Class II and Class III, where the latter is the air-conditioned type with front-facing passenger seats. It’s more of a minibus, though, than a conventional "king of the road.”

It’s also bigger than most jeepneys, as it measures 6,000mm long, 1,720mm wide, and 2,115mm tall. This size advantage tells a lot about the space inside for the passengers. The air-conditioned class III Hino PUV is a 23-seater, including the jump seat behind the front passenger. This is more compared to the usual waluhan or 16-seating capacity of the conventional ones. Seatbelts are made available, too, for added passenger safety.

Although the ceiling is high enough for people to stand in, Class III PUVs are provisioned to be a non-standing in type. On the upside, entry and exit is easy. As for the ride comfort, Hino’s Class III PUV is a whole lot better than the old jeepneys. The seats are well-cushioned and there’s ample wiggle room for each passenger. Even better, daily commutes would be much cozier with its air-conditioning powered by Denso. Hino Class II PUVs, on the other hand, are just about the same as Class III, sans three things: windows are replaced with plastic material (commonly called trapal) that you can fold if needed, side-facing seats, and of course, the absence of air-conditioning. 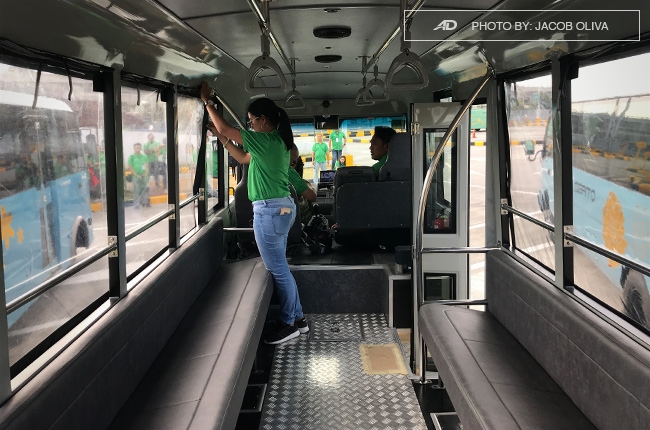 The ride comfort is the same, however, Class II PUVs are provisioned for standing in, so there’s room for passengers who choose to stand during commutes. With that, its 26-passenger capacity can be maximized further. HMP also gave us the chance to drive both modern PUV prototypes in a closed driving course in Sucat, Paranaque. Comparing to the old jeepneys, we immediately noticed the higher seating position of the driver and large windshield that both translate to great driving visibility.

The prototypes are equipped with a Euro 4-compliant 3.1L direct-injection diesel engine, with maximum outputs of 136 hp and 390 Nm of torque. These aren’t too much, but they’re enough to haul passengers even with the vehicles’ almost 5,000 kg gross weight. Driving the modern PUVs was painless as well. Although it’s still far from the usual passenger cars and SUVs, it’s a lot easier and more comfortable than the old jeepneys. I can personally attest to this as I was able to drive one around before — yes, complete with the pumping brakes.

The steering wheel felt light, and shifting gears through the 5-speed manual transmission was smooth and straightforward. There are also four cameras spread throughout the vehicle to add visibility to the prototype’s blind spots. With the vehicles’ large body, adding extra set of “eyes” is definitely a treat.

Take note, though, that the specifications and inclusions of the modern PUVs will still depend on the purchase order that will come from the government. But despite this, it will likely be the same, especially the technical specifications. After the experience with the Hino modern PUVs, we reckon, the future of public transportation looks bright for the passengers and the drivers — at least in the aspect of the replacing the vehicles.

As the Department of Transportation (DOTr) always point out, PUVMP isn’t only about replacing the old jeepneys. PUVMP also entails driver discipline and welfare, vehicle deployment, operation, design of routes, and localization of units. That’s how our government sees it.

On the other side, it also means that drivers and operators need to invest in order to comply with the said program. That’s not an easy task, mind you. Although the government has a loan program to subsidize the cost of modern jeepneys, the aggravated party (the jeepney drivers primarily) is still at the short end of the stick.

With the convenience that the future PUVs provide for both the commuters and the drivers, we just hope that there's a win-win agreement among the parties. Modernization is important for the country’s progress, but it isn’t real progress if not everybody’s involved.