The Suzuki Jimny is one of the more affordable SUV’s you can get on the market today. Known for its mountain goat-like off-roading capabilities it’s no wonder why the mini-SUV has such a great following. With its small dimensions, the Jimny presents itself as a vehicle you can take off the beaten path on the weekends and be a capable city companion itself. Currently, Suzuki Philippines sells the mini off-roader in two variants with each having its own benefits, with that in mind we created a quick variant guide to see which one could best suit you. 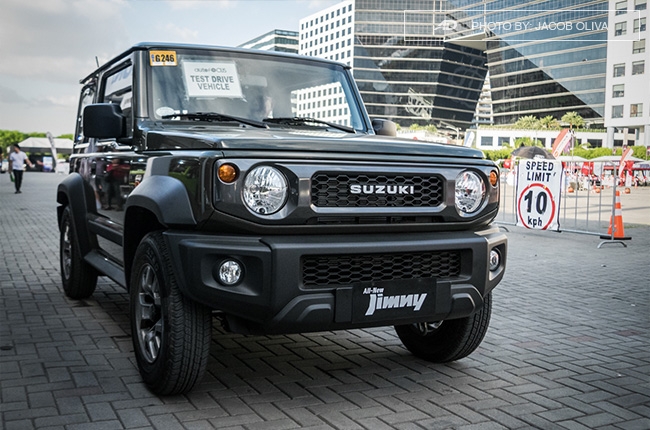 The Suzuki Jimny GL is the model’s entry-level variant in the Philippines. Don’t let the entry-level word fool you as it’s as capable of going off-road as its higher-grade counterpart. As the starting model, there are already a lot of standard features to be had with the vehicle.

For starters, its design is similar to that of the higher GLX variant as the exterior kit remains similar across the model lineup. Where they differ slightly is in a few minor accents found on the outside of the vehicle. An example of this is that the GL variant only comes with halogen multi-reflector headlights and lacks a headlamp leveling device. It also comes standard with body-colored door handles and black outside door mirrors.  Aside from this everything else exterior wise is the same between the GL and GLX Moving onto the interior everything else is similar between the two variants with only minor differences. While the two models do come standard with a 9-inch infotainment system and with clinometer display the GL variant does not display pitch, roll, compass, barometric pressure, and altimeter. It also does not come with cruise control, and with a ticket holder or vanity mirror for the front passenger. The 12-volt socket at the rear has also been removed for this variant along with a luggage box for a flat floor at the rear. It is also important to note that the GL variant does not come with a reverse parking camera, but does bring with it reverse parking sensors. Not much of a problem especially for a vehicle of its form factor.

One thing to take note of, however, is that while the GL does come with many safety features such as dual front airbags, seatbelts for all occupants, Electronic Stability Program (ESP), hill hold control, hill descent control, and ISOFIX tethers, it does not come with a brake assist function.

While it does lose out on a few convenience features, the Suzuki Jimny GL is still a great buy thanks to its price point of slightly above P1,000,000. The Suzuki Jimny GLX, on the other hand, already builds on what the GL started. As both variants come standard with a 1.5-liter naturally aspirated engine gasoline engine, All Grip Pro 4x4 system,  and two transmission options. Both variants can be had with either a 5-speed manual or a 4-speed automatic. In terms of power either variant pushes out 100hp and 130 Nm of torque. While not the most powerful engine on paper it does suit the Jimny well thanks to its lightweight. Exterior wise the design between the GLX and GL remains the same with only the LED projector headlights and lamp washers differentiating the two. To differentiate the two Suzuki Philippines has also added a special two-tone color option for the higher variant to give it a better look. Wheels and tire options between the two models remain the same with 15-inch wheels wrapped in 195/80 series tires. On the inside, the GLX comes with more creature comforts than its lower variant. It shares the same 9-inch infotainment system as the GL, however, it comes with automatic air conditioning controls instead of the manual ones found in the lower model. Aside from this its clinometer now displays the vehicle’s pitch angle, roll, a digital compass, barometric pressure, and altimeter. Handy features to have if you plan to take the Jimny off-roading. Adding more convenience to the vehicle is the addition of cruise control, a great feature to have if you plan to take the mini SUV out of town. Unlike the GL variant, the GLX now comes with a ticket holder and a vanity mirror for the front passenger.

In terms of safety, it’s the same standard kit found in the GL variant, however, a brake assist function has been added to the vehicle to further aid the driver in the event of a crash. With a price tag of around P1.2M, the added features justify the increase in price. If you want to know more about the Suzuki Jimny and its price list you can head over to our website for further specifications. While both variants come with their own merits, the value for money goes to the GLX variant as the increased price is justified by the creature comforts that it brings. Despite the win going to the GLX, the GL has its own merits as well. Even as the entry-level model it already brings with it a lot of standard features found in the higher-end trim. While you lose out on a rearview camera, brake assist function, cruise control, and LED projector headlights its affordability is something we can’t overlook. This makes the variant a great buy for those who want to get a weekend off-roader that won’t break the bank.

As the overall winner, the GLX offers you all the bells and whistles along with more creature comforts. Having cruise control, especially if you plan to take the vehicle out of town on long stretches of highway is a great feature to have to relieve some of the stress from driving. The addition of a reverse camera also helps especially if you want to maximize your parking space. Not to mention the brake assist function could come in handy especially when it comes to an emergency situation. The LED projector headlights offer better visibility thanks to a better throw and cut off compared to their halogen reflector counterparts.