The Ford Territory happens to be one of the desirable options in its respective segment, given its balanced combination of power, practicality, and technology. Upon recalling, this compact crossover was locally launched just this August, and it was made available in two distinct variants, namely the Trend and Titanium+ trims. Notably, both variants are priced affordably and come well equipped with features. With that in mind, you’re surely wondering which variant best suits your taste and budget. While there’s only one powerplant and transmission available, there are actually some contrasting elements that make each trim-level unique.

Related: The Ford Territory combines good looks with functionality at an affordable price

An entry-level that’s not so bare at all The majority of car buyers often have this common logic that entry-level variants lack form and substance, well, that’s not the case with the Ford Territory Trend. In fact, even with its much more attainable price point than the Titanium+, it does get a generous amount of standard features.

The exterior equally stands out with the top tier trim. Everything is pretty much the same, from the LED lighting for the headlights, taillights, and rear fog lamps, to the blacked-out grille and roof rails. However, you’ll notice a slight reduction of chrome accents, specifically on its door handles and on the black plastic cladding below each door. Lastly, the Trend variant also gets smaller rims, measuring in 17-inches.

The cabin is as aesthetically pleasing as its exterior. Admittedly, the Ford Territory does combine looks with functionality which makes this a very stylish yet practical compact crossover. Its interior was meticulously crafted given the use of quality material that feels durable and good to the touch. It also gets leather on the steering wheel, seats, dashboard, and on the center console, which does add a touch of finesse. However, instead of getting the lovely wood accent from the higher trim, it was then replaced with a silver garnish material which also works well with the interior’s all-black theme.

Standard equipment includes the wondrous 10-inch touchscreen infotainment system with Apple CarPlay and Android Auto, sound is then emitted through a 6-speaker setup. Other convenience features include USB charging ports, cruise control, rear parking sensors, a backup camera, and a lovely panoramic sunroof. What you do lose over the top trim are the fully digital gauges which are then replaced with a more traditional analog display. You also get basic safety features like an Anti-lock Braking System (ABS), Electronic Brakeforce Distribution (EBD), and traction control. That’s quite a vast feature list for an entry-level variant, right?

Engine-wise, this crossover is motivated by a 1.5-liter turbocharged EcoBoost that is able to produce 141 hp and 225 Nm of torque. The said mill is then paired with a Continuously Variable Transmission (CVT).

This jam-packed entry-level Trend can be yours at P1,179,000, quite a good proposition given that you do get a lot for your money.

A range-topper that sets the bar high 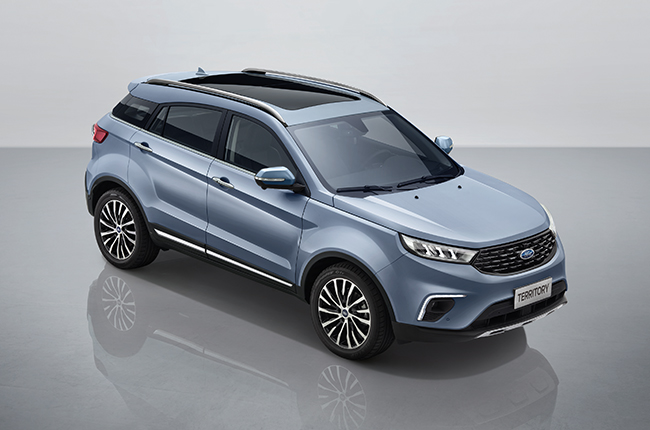 While the Trend impresses us with its already-jam-packed specifications, the Titanium+ trim changes the game in the compact crossover segment. While its other competitors might have matchable specs, they do come with heftier price tags, this is where the attainable cost and high-tech approach of the Ford Territory Titanium+ shines. For just P1,299,000, this compact crossover gets a slew of safety and convenience features.

Aesthetically, the exterior of the Titanium+ has been heightened by the addition of chrome accents on its door handles and on the black plastic cladding below each door. It also gets a different set of 18-inch alloy wheels which sports a cutting-edge design. On top of these upgrades, everything remains the same.

Inside, the generous amount of leather treatment on the Trend has been maintained in this top tier variant. Notably, those silver garnish accents were also replaced with some nice looking wood trim details. You also get the same infotainment system but the sound system, on the other hand, has been upgraded to 8-speakers which does render good sound quality throughout the cabin. While the Trend gets manually adjustable seats for the driver, the ones on the Titanium+ are power operated which is a breeze to use.

What’s an odd feature in its segment are the heated and cooled front seats which give front occupants that ultimate coziness throughout the entire trip. Other convenience features include a wireless charging pad, adaptive cruise control, front and rear parking sensors, and a 360-degree camera which is very helpful when tackling tight spaces and other obstacles. Just like the Trend, it also gets that awesome panoramic sunroof which lights up the cabin very well.

Apart from the aforementioned standard features of the trend, the Titanium+ trim gets the brand’s Co-pilot safety suite of features, ensuring convenience and the ultimate safety experience for the driver and its passengers.

Lastly, both variants share the same 1.5-liter turbocharged EcoBoost that’s paired with a Continuously Variable Transmission (CVT) as well. Now, this is an ultimate range-topper. 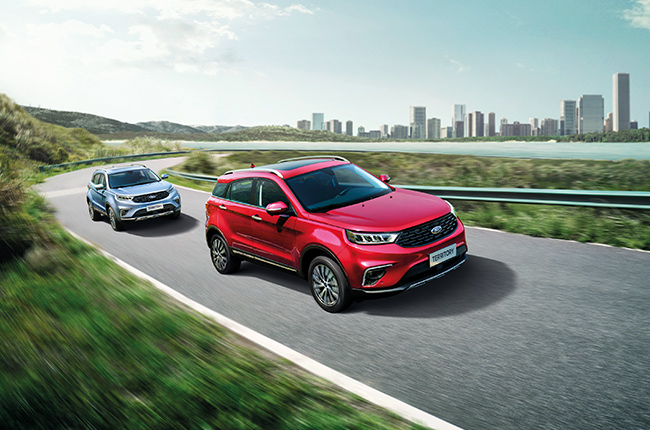 After a thorough examination of both variants, we’ve come to the conclusion that the Ford Territory Trend wins this thorough comparison, as it exhibits great value through its generous amount of standard features which can be acquired at an attainable price tag.

Don’t get us wrong, the Titanium+ trim is absolutely a joyful thing to have especially considering its slew of safety features. It’s just a matter of taste and leaning towards your needs. The Trend seems to be a more practical option, but if you're the kind of fellow who’s an avid fan of tech, then the Titanium+ is the way to go.