The Ford Territory has been part of Ford’s lineup portfolio from 2004 until 2016. It used to be assembled in Australia and was categorized as a midsize crossover that can be had in either a seven-seater or five-seater configuration. Recently, the Territory nameplate was reincarnated, and despite having the same name as the discontinued model, there was no relation between the two vehicles.

Related: The 2021 Ford Territory is officially on sale in the Philippines

Now categorized as a compact crossover, the new Ford Territory stands proud with its sleek looks, advanced features, as well as its spacious and well-appointed cabin. This latest addition to Ford’s Philippine lineup should sit in between the EcoSport and Explorer, making it the medium option of the pack. It’s undoubtedly one of the most well-equipped models in its respective segment, not to mention all those features can be acquired through an insanely affordable price tag.

Behind all these facts and praises, we actually got a chance to drive and have a closer look at the new Ford Territory, and I’m telling you, it does look and feel promising.

Machismo with a stash of pizazz I don’t know about you but we find its overall design to be both elegant yet robust. Upfront, you get a host of LED lighting, from the main headlamps to the daytime running lights which also serves as its turn signals. The fog lamps, however, are halogens which is not a bad thing at all. Its grille comes with a gloss black material that’s somewhat shaped in a hexagonal form. In order to further emphasize it’s robust profile, the bumper sports a black plastic cladding combined with a silver garnish which functionally works as added protection for your paint. As for the side profile, the Territory continues to flaunt its machismo aesthetics, this is complemented by the solid and well-planted lines. The consistency of the black plastic cladding continues on the side, although this time there’s a bit of pizazz to it, all thanks to the addition of chrome which can be found on each cladding, door handles, as well as on the windows. Like the EcoSport, the Territory has a blacked-out D-pillar, which gives it the illusion of a floating roofline. The model showcased on the photo is actually the Titanium+ trim, therefore, it gets those gorgeous 19-inch alloys which adds to the overall look of the crossover. 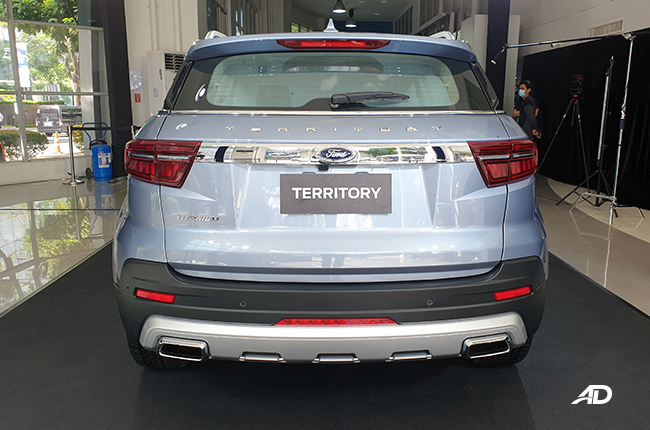 The rear is bulbous and its overall execution makes the vehicle look bigger than what it is. It gets LED taillights, a third brake light on the spoiler, and a rear fog lamp which is placed at the lower part of the bumper. There’s still a strip of chrome on the rear window, as well as the black plastic cladding and silver garnish material on the bumper. However, don’t be fooled by the silver rectangular pipes, they’re actually not meant to function as exhaust pipes, rather, the real ones are actually integrated under the vehicle. Somehow I wish those were real, but yeah, it’s there to enhance the Territory’s look. Inside, you’ll be surprised with the overall execution done by the design team. It actually follows an all black theme, while the material from the dashboard, doors, and seats have a hint of quality and durability. Apart from the seat upholstery, the door panel and dash also sport the same treatment of leather. It certainly does the job in terms of comfort, as its small dimensions ironically translate to a cavernous cabin. Quite surprised, I’m 5 foot 11, and I have tons of legroom at the back even though the front seat is adjusted to my position. It’s also worth noting that the headroom is also sufficient despite the presence of that panoramic sunroof. 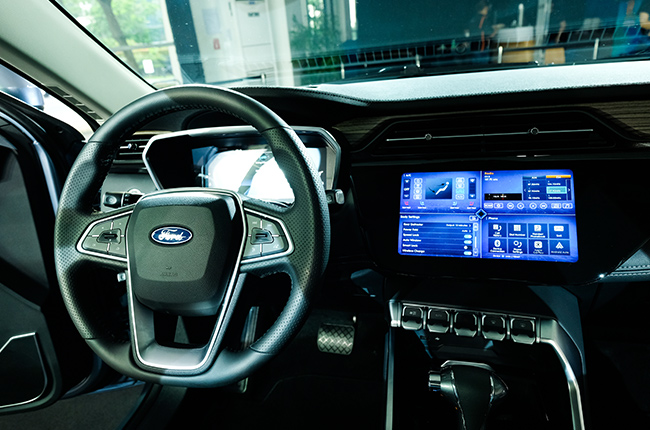 For the higher Titanium+ trim, it also gets heated and cooled front seats which is a bonus, given that this is a rare feature to be found in its segment. What’s another segment’s first is the wireless Apple CarPlay, which allows you to integrate your Apple device without even plugging a cord, pretty neat! Don’t worry Android users, Ford didn’t forget Android Auto, although, you’re still going to need your trusty cable in order to sync your phone into the system.

Notably, features like the leather upholstered seats, the 10-inch touchscreen with Apple CarPlay and Android Auto, and the humongous panoramic moonroof are standard on both variants, which is a great proposition. Although, upgrading to the Titanium+ will give you other high-tech equipment, like a 10-inch fully digital instrument cluster which adds that futuristic vibes, and the brand’s Co-pilot safety suite of features, ensuring convenience and the ultimate safety experience for the driver and its passengers. I got to drive the Ford Territory within Bonifacio Global City, Taguig, and it was indeed a smooth sail. First off, the additional ground clearance, this actually gives me that added confidence as I traverse city roads or provincial roads in some instances. Perhaps this is the main reason why I really love crossovers.

The compact crossover does offer good visibility upfront all thanks to decent-sized windows on both sides, and I really like the fact that the base of the hood is visible while I’m driving. The rear windows are quite small, but Ford made it up by equipping the Territory with a 360-degree camera which is a breeze to use in tight parking spaces.

While on cruise, the 1.5-liter turbocharged EcoBoost engine is eager and punchy. That 141 hp and 225 Nm of torque does translate to good performance, and like most EcoBoost engines, this one also embodies power and efficiency. It accelerates smoothly given the accompaniment of the Continuously Variable Transmission (CVT). Braking was precise, as it provides you enough stopping power when needed. The Electronic Parking Brake also adds convenience to the overall driving experience.

Engaging in Sport mode gave the Territory a more spirited feel, power delivery actually became more instantaneous. Then again, it’s no Mustang, but it does its job comfortably and smoothly, which is actually how a crossover should be. With that, I definitely see the Territory as an ‘urban warrior’, a proper city vehicle just like the smaller EcoSport. For now, the Territory is on sale with very pocket-friendly introductory prices. The Trend variant actually starts at P1,179,000, while the range topping Titanium+ trim can be had for P1,299,000.

The Titanium+ variant may seem like the more desirable option given its slew of convenience and safety features, but the Trend is still worthy of your consideration and it’s not as bare as you may think. You’d still be surprised by the amount of standard features this entry-level variant has to offer. 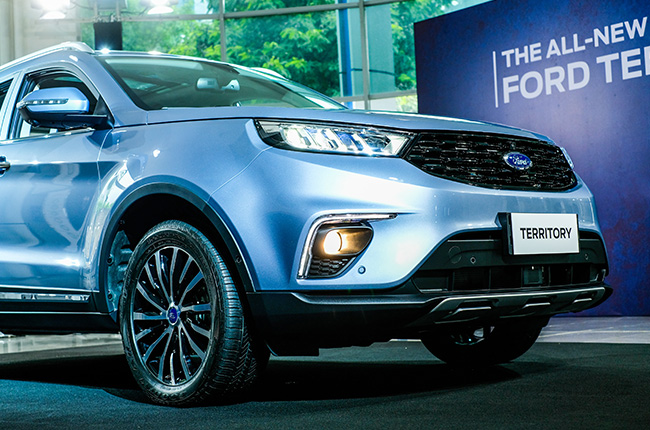 So after all this experiential data gathered with regards the Territory, we’ve come to the conclusion that this compact crossover is worthy of your consideration. Therefore, if you're looking for a high-tech yet affordable compact crossover that does not scarce performance and efficiency, then look no further than the Territory.

Other competitors might have matchable striking looks or comparable specifications, but what sets the Ford Territory apart from the rest is with it being able to acquire those state-of-the-art features and sleek aesthetics at an attainable price tag.