After much anticipation and several teasers, the 2021 Ford Territory has officially been launched in the Philippines. The all-new crossover brings with it a sleek new look, coupled with new smart safety and performance under the hood.

The all-new crossover was developed by Ford Motor Company in collaboration with its partner Jiangling Motors Corporation (JMC) to bring the all-new Territory to life with Ford DNA in its blood. Ford states that it’s design, engineering, and capabilities all follow the brand’s highest global quality standards.

The Ford Territory will boost our growing SUV lineup as a new product born out of Ford’s long- standing heritage and expertise in the utility segment. We are confident that the Ford Territory will offer a new driving experience to Filipino customers as a modern, spacious and technologically-advanced SUV that delivers great value.
PK Umashankar
President and managing director, Ford Philippines

Related: The 2021 Ford Territory – How will it stack up against the competition in the Philippines? On the outside, the Ford Territory comes with an urban-ready aesthetic. It comes with an imposing front end that comes with a large grille that is flanked on either side by sleek LED headlamps. Completing the LED lighting suite, the all-new crossover also comes with LED daytime running lights and LED tail lamps as well. The vehicle also comes with front and rear fog lamps for added safety when visibility conditions get tough. On top of this, the Territory also features a panoramic moonroof, a rear spoiler, and roof rails as well for added convenience for exterior cargo carrying needs. 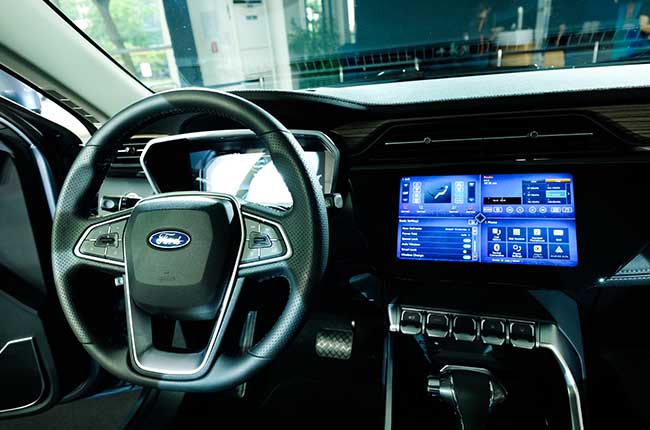 Similar to its instrument cluster, the Ford Territory also comes with a 10-inch touchscreen infotainment system with an adjustable quad view as standard for both variants of the all-new crossover. The head unit is also capable of Apple CarPlay and Android Auto smartphone mirroring capabilities. On top of this, the all-new crossover also features wireless charging for its Titanium+ variant. Wireless Apple CarPlay is also available with the vehicle making it easier for users to connect their iPhones with the head unit and mirror their smartphones. Sorry Android users, but you will still have to use a cable in order to use Android Auto with the new vehicle. The new crossover also comes with four USB ports to meet your charging needs and a 6 or 8 speaker sound system depending on the variant. Safety also seems to be the name of the game for the Ford Territory Titanium+ as it comes into the market with the Blue Oval’s Co-pilot safety suite. This gives the vehicle access to features such as active park assist with parallel-parking, perpendicular parking assist, a 360 degree around view monitor, adaptive cruise control with forward-collision warning, autonomous emergency braking, blind-spot information system, and a lane departure warning system. Under the hood of the all-new Ford Territory is a 1.5-liter turbocharged EcoBoost engine that produces 141hp and 225 Nm of torque. The crossover sends its powers to the front wheels via a CVT. With the new powertrain, customers can expect to enjoy lower service maintenance costs with a once-a-year scheduled interval allowing for a better ownership experience. If the displacement and power output sounds familiar it is because the 1.5-liter Ecoboost comes from the same family of engines that was once found in the Ford Focus.

The Ford Territory can be had with a starting price of P1,179,000 for the Trend variant and P1,299,000 for the Titanium+ variant. This not only makes the vehicle more affordable it also makes it more competitive as well. With its attainable price point, the all-new crossover is sure to be a hit with young professionals and starting families looking to buy their first car.