Based on our April-to-June 2016 data, the Mitsubishi Adventure is among the top 10 most popular vehicles. That being said, one question comes to mind; why is it still gaining popularity after all these years in the local market?

For starters, the Mitsubishi Adventure is proudly Philippine made. In 1997, Mitsubishi Motors Philippines Corporation (MMPC) began its production in their former assembly plant in Cainta, Rizal. Then in early 1998, they released it into the local market to compete in the Asian utility vehicle (AUV) segment. Never losing its grip in the segment, it eventually saw its 100,000th unit production come out in 2014. As for passenger space and cargo, the TX variant can seat 5 people. It also has a large cargo area at the back to carry big luggage or boxes. Meanwhile, the GX, GLX SE, and GLS Sport variants have an increased passenger capacity of 9 due to the 3rd row seats. The Super Sport version, on the other hand, also has a 3rd row, although it can only accommodate 7 people. It is, however, good to know that the 3rd row seats can be folded. This makes ample space for grocery bags, sacks of rice, or 2 stroller travel cases. 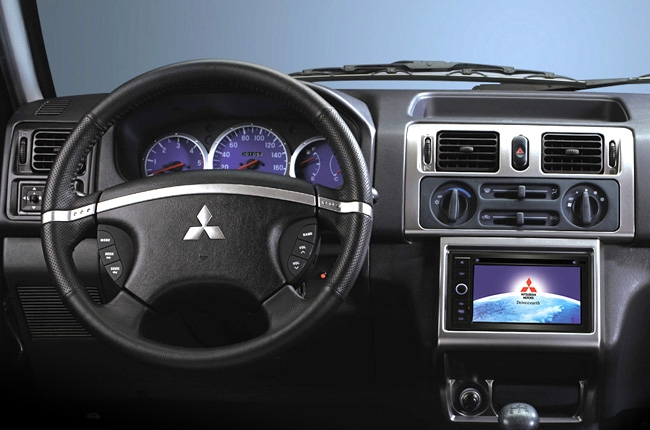 Inside, occupants can take comfort, especially on long journeys with the Adventure’s fabric-upholstered seats (the Super Sport comes with leather) and dual air conditioning system. They can also have a more enjoyable ride, thanks to an audio system with radio, CD, and MP3 playback. But there’s more as opting for the higher variants adds a 6.2-inch touch screen LCD, DVD playback, navigation, and Bluetooth connectivity.

For safety, standard features include 3-point emergency locking retractor (ELR) seatbelts for front passengers and 2-point lap belts for the 2nd row passengers. Aside from these, it also has child proof door locks to prevent accidental opening of the doors while on transit. Choosing the GLX SE, GLS Sport, and Super Sport variants adds engine immobilizer and anti-theft alarm for security purposes.

Under the hood is a diesel-fed 2.5L inline 4-cylinder engine capable of producing 75 hp and 149 Nm of torque. It’s then paired to a 5-speed manual transmission that drives the rear wheels.

MMPC credits the success of the Adventure because of the country’s steady economy and the continued appreciation it gets from customers. Aside from it being made here in the Philippines, it also boasts a competitive price range, commendable interior amenities, and an efficient engine. Moreover, MMPC regularly comes up with exciting promos for the Adventure, so buyers can drive it home easier with loads of freebies included.

For more information about the Mitsubishi Adventure, visit the AutoDeal Car Guide.