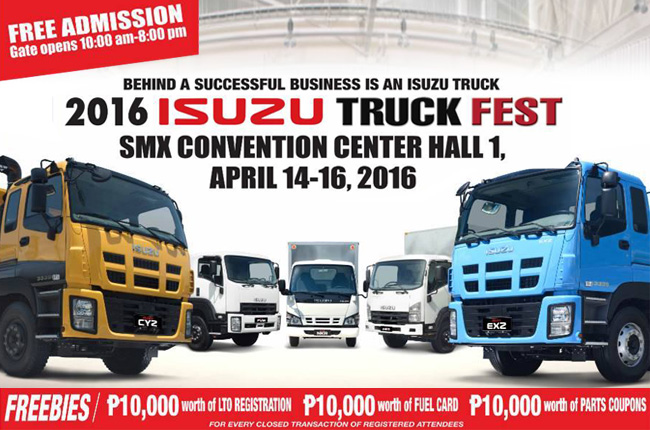 Isuzu Philippines Corporation (IPC) is set to hold the company’s annual Truck Fest this April 14 to 16, 2016 at the SMX Convention Center in Pasay City. For this year’s show, IPC will be displaying its array of high quality trucks such as the C and E Series.

In a nutshell, the C and E Series are IPC’s heavy-duty commercial vehicles that are primarily designed for hauling goods. To date, IPC is offering one variant of the C Series while two options are available for the E Series.

Starting with the C Series, the Isuzu CYZ 6x4 model is powered by a 14.3-liter diesel engine that delivers 390 hp and 1,853 Nm of torque. It is connected to a 7-speed manual transmission. The CYZ also comes with an Anti-lock Brake System (ABS) which reduces the stopping distance during emergency braking situation.

On the other hand, the E Series is locally available in two variants – the EXR and the EXZ. Both variants are equipped with a 390 hp 14.2-liter diesel engine that delivers a pulling power of 1,853 Nm. These trucks feature power steering, power windows and ABS as standard. The only difference lies in the transmission – the EXR has a 7-speed manual while the EXZ is mated to a 16-speed manual transmission with Inhibitor.

Get a chance to see IPC’s C and E Series trucks at the upcoming 2016 Isuzu Truck Fest. To entice you further, IPC said that registered attendee who purchased any Isuzu truck from April 14 to June 30, 2016, will be entitled to get P10,000 worth of fuel card, P10,000 worth of LTO registration and P10,000 worth of Parts coupons.