After much anticipation, the all-new 2021 Honda City finally arrives for the Philippine market. Apart from its heavily refashioned exterior, the subcompact sedan also gets a fresh interior that’s blessed with a generous amount of features. Now with such a comeback, will this all-new model retain its place as the best-selling sedan in the Japanese brand’s local lineup. 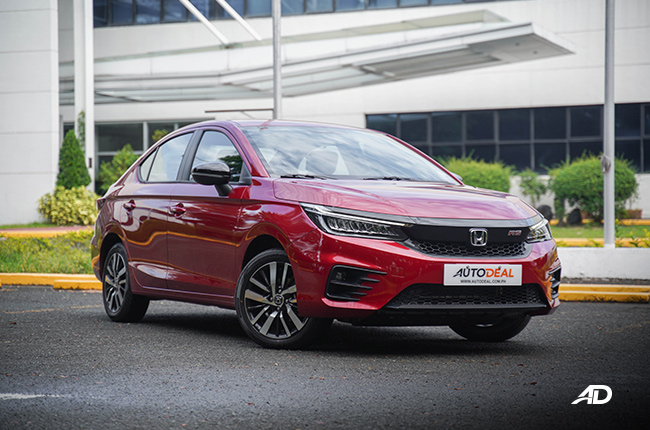 Now, there are some key exterior differences when looking at each of its variants. The all-new Honda City actually comes in 4 variants, starting off with the S which is available in both manual and CVT. Next up is the mid-range V and the range-topping RS which are both solely available in CVT only.

Upfront, all variants get a more prominent face which is somewhat reminiscent of its larger sibling, the Civic. Only the RS variant comes equipped with full LED headlights and LED fog lamps, while the rest of the range gets halogen projectors along with LED daytime running lights. The top of the line variant gets a blacked-out grille along with an RS badging for a more distinctive profile, while other variants get a chrome application on its grille instead. Going over the side, the subcompact sedan retains its clean look, as complemented by its well-planted lines. It’s actually more boxy rather than curvy, and beneficially, its dimensions should translate to cavernous cabin space. For the RS and V variants, the turn signal indicators are reinforced on the side mirrors, while the S CVT and MT trims are then mounted on the fenders. Other contrasting details include the chrome door handles which are exclusive on the V variants. Furthermore, the Honda City can come with different alloy wheels depending on the variant you purchase, S trims get 15-inch alloys, while the V variant then gets larger 16-inch wheels, and lastly, the RS trim also gets 16-inch alloys, however, it does feature the special RS design. Like the rest of its body, the rear of the Honda City has been fully changed in comparison with its predecessor. It’s more clean and prominent as well, apart from the new bumper it also gets an LED taillight that looks sleek and does complement its overall design. Exclusive on the RS, however, is a sporty gloss black trunk spoiler. Inside, the cabin is indeed a step up from its predecessor. Apart from its better layout, the interior also comes with more features than before. To start it off, standard features on the all-new City include a push start button, automatic up and down windows for the driver, manually adjustable seats, and steering wheel-mounted controls. Now, going towards the contrasting features of each trim, the fused leather, and suede seats are exclusive to the range-topping RS, while the rest of the range get cloth seats. As for in-car entertainment, the 8-inch touchscreen is available on all automatic variants. Notably, this large screen comes with Apple CarPlay, Android Auto, and WebLink, which should be handy for those who seek seamless phone integration. The entry-level manual, on the other hand, only gets a standard 2DIN radio. The majority of the variants get a 4-speaker setup while the RS benefits from an 8-speaker sound system. As for airconditioning, only the RS and V trims get automatic climate control, while both S variants come with a manual system.

Lastly, like most Honda products, the City variants, except the entry-level manual, get an Econ button, which should help drivers boost their fuel economy. 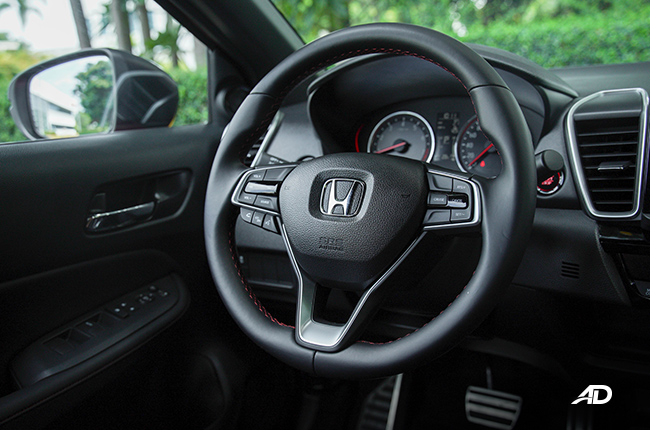 This subcompact sedan gets standard airbags, specifically driver, front, and side for the S and V, while the RS gets additional side-curtain units. The all-new Honda City also gets standard features like Vehicle Stability Assist, Hill Start Assist, Anti-lock Brake System, Electronic, and Emergency Stop Signal.

Moreover, it also gets other complementary safety features like speed sensing door locks, immobilizer, and a multi-view rear camera, which is exclusive on the V and RS trims. In terms of powertrain, the Honda City is run by a small 1.5-liter four-cylinder dual-overhead-cam (DOHC) i-VTEC engine, that puts out 119 hp and 145 Nm of torque. The previous-generation Honda City only had a single-overhead-cam (SOHC) valvetrain while the new one is now DOHC.  The said could either be paired with a Continuously Variable Transmission (CVT) or a 6-speed manual gearbox.