The current generation of the Hyundai Santa Fe has been on the market for about 2 years now, however, that hasn’t stopped the South Korean automaker from giving it a new look.  With the addition of its fresh new face, the Korean 7-seater crossover now rides on a new platform. As a prelude to the facelift, Hyundai teased a photo of the front of the Santa Fe earlier in May of 2020. The teaser photo only showed the front of the vehicle and its new face. Since then the facelifted version of the vehicle has officially hit the market and we can now see it in the metal.

Related: The 2021 Hyundai Santa Fe’s front has been revealed via a teaser photo 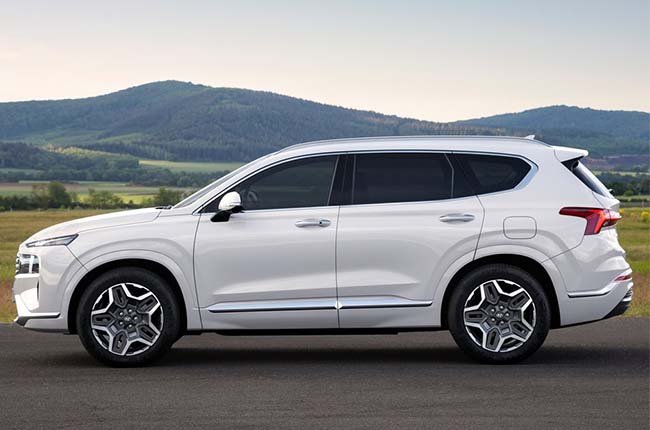 Similar to the teaser photo the South Korean automaker released in May the Hyundai Santa Fe gets a more aggressive and snake-like front end. It now features a more rectangular grille that carries the same design philosophy as Hyundai’s recently released vehicles the Sonata and Elantra. In conjunction with the new grille, the South Korean crossover also gets a new set of T-shaped headlights that are split by LED daytime running lights.

Moving on to the sides of the Santa Fe the vehicle still remains the same as the previous generation save for a new set of 20-inch wheels. At the rear of the vehicle, things remain familiar. It now features new tail light graphics that are paired with a new light bar that runs the length of the tailgate. A new horizontal reflector has also been added to the lower bumper of the Santa Fe which gives further emphasis to the vehicle’s width. Finishing off the changes to the rear of the Korean crossover is a new diffuser and skid plate. On the inside Hyundai has refreshed the cabin. The South Korean crossover now comes with a new 10.25-inch touchscreen infotainment system, and an even larger 12.3-inch digital instrument cluster. In order to accommodate the new digital display the center console has also been revised. Hyundai has done away from the traditional shift knob and has chosen to use shifter buttons instead in order to free up space. A Terrain Mode selector is now present in the vehicle allowing for the utilization of different drive modes further optimizing the usage of the all-wheel-drive system. Hyundai has also added more soft-touch materials to the new Santa Fe giving it a more premium and comfortable feel. In terms of power, Hyundai has yet to release these technical specifications. However, since the 2021 Santa Fe now rides on a new third-generation vehicle platform, the South Korean brand states that it now comes with improved performance, efficiency, and safety. Adding to this the automaker has confirmed that the crossover will be available with a hybrid and plug-in hybrid version as well. As for its fossil fuel power plant, we will just have to wait a little while longer for Hyundai to reveal them. Our best guess gives the vehicle the same engine options prior to its facelift.

Hyundai Philippines has yet to confirm if the facelifted Santa Fe will be making its way into the Philippines. With the model still being currently fresh in the local automotive market, it might take some time before the South Korean automaker brings it the new vehicle into the country. If the South Korean automaker does bring it in, the hybrid would be a viable option as it can take advantage of a 50% discount on excise tax.