Back in April, we stated that the Volkswagen Nivus would be launching soon. The crossover at the time still had camouflage on and several of its body details were still hidden. This time, however, the vehicle has been officially launched in Brazil and you can now see it in its natural state. The Volkswagen has dubbed the Nivus as an “Urban Coupe” while the vehicle itself isn’t classified as such it does come with a sleek rear end which resembles that of an actual coupe.

Related: Why 2020 Volkswagen Nivus is ideal for the Philippines 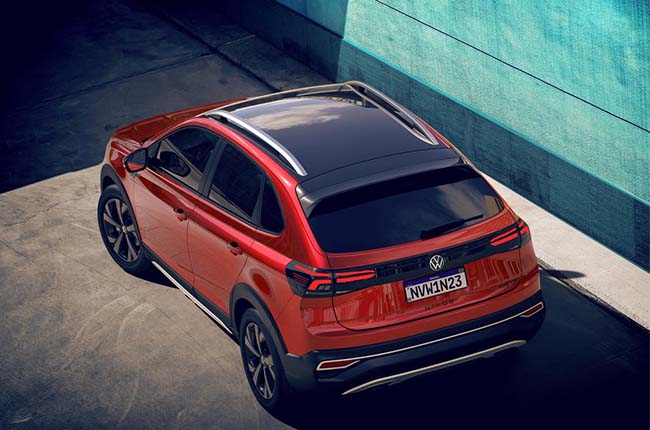 Style-wise Volkswagen borrowed some elements from its sub-brands such as Audi. The Nivus features a high-set and connected tail light design. An integrated tailgate spoiler is also present in the vehicle giving it a touch of sportiness. For the front of the crossover, it follows Volkswagen’s current design language with its slim five-sided headlights, hexagonal grille, and a more rounded-off front face. It also follows in the two-layer grille design that is currently present in the Santana, Lamando, and Tiguan.

The new German crossover measures in at 4,266mm in length, 1,757 mm in width, and 1,493mm in height, and with a wheelbase of 2,566 mm. This gives it a length advantage against its rivals like the Hyundai Kona, Kia Seltos, and Ford Ecosport, however, it will be slightly shorter than the Kicks and HR-V. Design-wise Volkswagen has borrowed styling elements from its sub-companies such as Audi to fit in with the overall urban theme. While the Nivus does look like a capable crossover, don't expect to bring it on light off-road trails as the vehicle only comes with a front-wheel-drive layout. As of now, it will only be available with one engine and two transmission options. If you like to shift the vehicle yourself it can be had with a 6-speed manual or if you’re one for letting the vehicle do the shifting for you it can be had with a 7-speed DCT. Powering the Nivus is a three-cylinder 1.0-liter TFI turbocharged motor. This gives the German crossover 126hp and 200 Nm of torque.

While the vehicle is primarily designed for the Latin American market its platform could easily be modified to suit the ASEAN market. In order for that to happen, however, Volkswagen will have to first sell the Nivus in China. The German brand has a standing agreement with SAIC motors in which the Chinese manufacturer will be in charge of building Volkswagen vehicles for the Chinese market. With that said if SAIC ends up building the Nivus it could easily make its way into the Philippine market with an affordable price tag. This, however, has not been confirmed by Volkswagen Philippines, and as such only time will tell if the new crossover will make its way into the local automotive market.