The 2023 Honda CR-V has been a hot topic recently as the Japanese automaker has been dropping teasers of the crossover for the past few weeks. Now, however, it has finally made its official debut for the North American market with a more rugged design and with updated hybrid powerplant options. 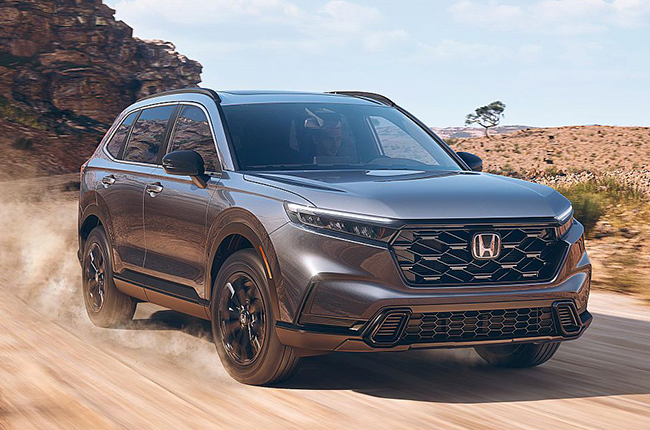 The new Honda CR-V has grown quite a bit in size over its previous version. It is now 69mm longer, 10mm wider, and its wheelbase has been extended by 38mm over its predecessor. In terms of styling, the new CR-V sports the brand’s latest design language with similar styling cues to the locally available Honda HR-V with its slim LED headlights and large grille. Together these changes help give the Japanese crossover a more mature and sophisticated look which works well for the vehicle giving it a more upright stance. These changes also work in tandem with its larger windows and new L-shaped LED taillights. There are also a few minor details that help bring the new look together such as a new tailgate spoiler and reshaped twin exhaust tips. On the inside, the new Honda CR-V shares much of the same interior as its Honda Civic sibling. It features the same layout as its sedan counterpart with a 7-inch information display for the driver being standard and a 9-inch touchscreen infotainment system being found in the higher models. For the lower variants, a 7-inch head unit can be found. Regardless of the size, both infotainment systems will come with Apple CarPlay and Android Auto capabilities.

For what comes under the hood, the new CR-V has two engine options to choose from. The first is the 1.5-liter turbocharged engine that pushes out 187hp and 243 Nm of torque, while the other is a 2.0-liter hybrid powerplant that comes mated with a pair of two electric motors. Together the hybrid system pushes out a combined output of 201hp and 335 Nm of torque. Both of these engines are mated to a CVT transmission.

There is no word yet as to when Honda Philippines will bring in the 2023 Honda CR-V as signs point to its local arrival being in late 2023 or in early 2024. If you want to see more news and updates along with promos that the local arm of Honda has to offer in the Philippines, make sure to visit our website where you can find the best deals for your future car.