The Vios is Toyota’s popular entry into the subcompact segment. It’s so common that you can find one almost anywhere. It has seen use in taxi fleets and as racecars in the Vios Racing Festival. It has won the hearts of the Filipino thanks to its reliability and parts availability. The sedan is also assembled here locally.

But let's say you don’t want to follow the norms and want to find something a little different. We offer you a quick list of alternatives to the popular Japanese sedan. These alternatives deliver the same quality if not better than the Vios. Each of these options has its own strengths and weaknesses. Each delivers something unique as an alternative to the popular sedan. First on the list is the Honda City. While it may not have the same amount of variants as the Vios, it more than makes up for it with features and its engine. Performance figures of the City put it well above the Vios 1.5 variant with a difference of 12 hp and 8 Nm of torque. Not a lot on paper but with both vehicles weighing roughly the same it can make all the difference.

For technology, both vehicles are on relatively equal footing as both have mid-tier units that come with 7-inch touchscreen head units that can both support Aux-in and Bluetooth. The base model units are where a difference arises. The base model Vios gets a 1DIN stereo while the base model City gets a 2DIN unit.

For safety, similar to that of the Vios, the City was able to score a 5/5 star rating on the ASEAN NCAP for its 6 airbag variant, while its 2 airbag variant only got 4/5 stars. The Vios has the upper hand in safety as all of its variants come standard with 7-airbags. For lighting, the City has a slight edge as it has the option for LED lighting, with the top-spec City having LED headlamps and fog lights.

For parts and aftersales services, Honda has got you covered with its multiple dealerships nationwide. Parts may be slightly more expensive but the quality is there. As a more powerful alternative to the Vios, the City gives you Japanese quality and performance to match. The Mazda2, while having a slightly higher base model price, still gives the Vios a run for its money in terms of handling and styling. The Mazda2 features the company’s own Kodo design language it gives sporty looks for its small body.

It matches the infotainment found in the Toyota sedan with its own 7-inch touchscreen unit. It also has the same functionality with Bluetooth and Aux-in as standard. It also features a heads up display unit, something that the Toyota sedan doesn’t have.

Where they differ is in transmission options, the Mazda2 exclusively comes with a 6-speed automatic transmission with sport mode while the Vios is available with either a 5-speed manual or CVT. In terms of performance, it’s a mixed bag for the Mazda2 while it is up in power by 1 hp it loses out in terms of torque by 1 Nm. It’s G-Vectoring Control technology is a plus, though, for those who want an extra edge in terms of handling.

For safety, the Mazda 2 was able to score a 4/5 star rating from the ASEAN NCAP. It gets this rating from its dual airbags paired with side and curtain airbags.

As for parts availability, Mazda has you covered with its free three-year periodic maintenance servicing program. Along with multiple dealerships nationwide ready to serve you and your vehicle. The Mazda 2 is ideal for those who want a shorter vehicle with handling oriented features. 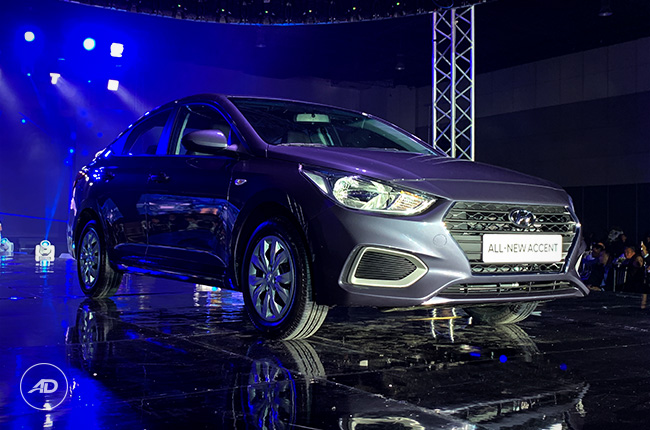 The Accent is also a popular choice in the Philippines and also has been a go-to choice for taxi companies along with the Vios. Because of this, parts for the vehicle are also plenty and relatively easy to find.

The Korean subcompact sedan can be had with either a 1.4-liter gasoline engine or 1.6-liter turbo diesel. The turbo-diesel variant has a 22 hp and 120 Nm advantage over Vios. While in its gasoline form, it produces 100 hp and 132 Nm of torque putting it at a deficit of 8 hp and 8 Nm of torque against the Toyota.

The Hyundai Accent only has a 3.8-inch infotainment screen, which is far smaller than that of the Vios. Aside from screen real estate, it also loses out on Bluetooth, but it does retain Aux-in.

The Accent in its hatchback form was able to score a 5/5 star rating on the Australia NCAP. Unfortunately, the ASEAN NCAP hasn’t tested yet so the ASEAN version of the vehicle still has an unknown safety rating. Airbags are not a standard option for the base trims so consider getting the variant that has it for extra protection. The Accent is ideal for those looking for a subcompact sedan with a frugal diesel engine option. Powering the Ciaz is a 1.4-liter engine. While its smaller in displacement than that of the Vios, it still produces 92 hp and 130 Nm of torque. What it lacks in power it makes up for in size. The Ciaz is 65mm longer than the Vios allowing it to have more room in the interior.

For entertainment, the sedan has an 8-inch Android Capacitive touchscreen head unit. It lets the user customize the user interface easily with apps unlike the head unit of the Vios. This is a great alternative for those who want a little more space for a similar price point of the Japanese subcompact sedan.

For safety, the Ciaz has two airbags, one for the front passenger, and one for the driver. Despite only having two airbags, the Ciaz was able to get an ASEAN NCAP rating of 4/5 stars for adult safety. The caveat is that it scores poorly for child safety only garnering 2/5 stars.

The Ciaz is ideal for those who want a little more space for a cheaper price point. Suzuki dealerships are plenty and the company itself is expanding in the Philippines, so parts and after-sales service shouldn’t be too hard to find. The MG 5 is a left-field choice as an alternative to the Vios.  It is relatively new to the market but comes packed with features that the Japanese sedan doesn’t have. It beats the Japanese vehicle in terms of pricing as the highest trim level doesn’t even hit the one million peso mark. The vehicle is also longer than the Vios by 176mm, that’s an extra 7-inches in length. Its overall dimensions are closer to that of an Altis than a Vios, giving the MG an edge in terms of interior space. This is ideal for those who want more space for a similar price point.

Power for the MG 5 comes from a 1.5-liter engine that makes 112 hp and 150 Nm of torque. While it has the horsepower advantage by 4 hp, it also has torque advantage of 10 Nm to help make up for its bigger size.

For infotainment, it features a 10-inch touchscreen that is Android Auto and Apple Carplay ready. Having smartphone mirroring is an added convenience for those who like having their phones connected to their vehicles it also lets the driver focus more on the road instead of fumbling with their phones. Another feature for the vehicle is front and rear parking sensors, which the Vios does not have. It also features a leather interior which is also lacking in the Japanese subcompact sedan.

For aftersales, MG is handled by The Covenant Car Company Inc. They are the exclusive distributors of Chevrolet and MG vehicles here in the Philippines. This means that wherever there is a Chevrolet dealership, there is bound to be parts for MG. MG even has a phone app to help customers schedule their PMS and for 24/7 roadside assistance.