One of the benchmarks of BMW cars is the 3 Series Sedan, which started its production in 1975.  With the current-generation and outgoing model introduced back in 2011, BMW wants to keep its “Dolphin” updated by introducing the seventh-generation 3 Series at the 2018 Paris Motor Show.

The all-new 3 Series Sedan is still sleek as ever, considering how it has grown in size. It’s 76mm (3 inches) longer than before in overall length, while the wheelbase has been extended by 41mm (1.6 inches). The front track is 43mm (1.7 inches) wider and the rear-end is increased by 21mm (0.83 inches). Despite the increase in size, the 2019 3 Series Sedan shed off a substantial amount of weight – It’s 55-kg lighter than before. 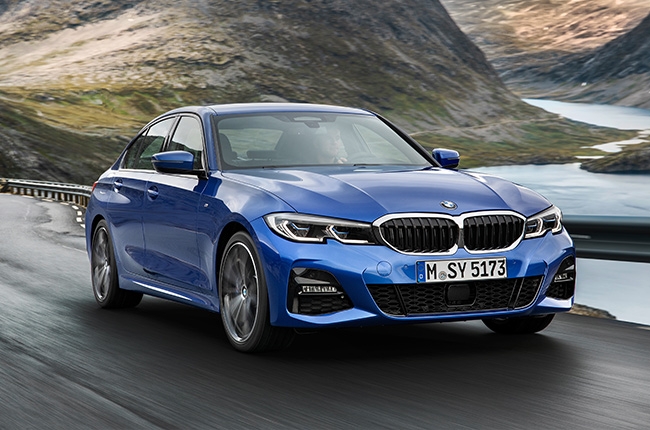 While the 3 Series almost kept its silhouette from the outgoing model, a few changes can be seen such as a more bulbous front-end near the tip of the hood. There are also fewer creases on the bonnet and the side panels. Perhaps the biggest changes are found with the light configuration, as the all-new 3 Series has narrower headlights and taillights, while the front and rear fog lamps have been restyled to mimic each other. Of course, twin exhaust pipes and bolder kidney grille top the cake, along with its shark’s fin antenna and the 10-spoke rims with thinner spokes.

Inside, the floating head unit becomes a thing of the past as BMW brings it back into the center stack, along with other controls for a unified, clean look. The 5.7-inch digital gauge clusters and 8.8-inch infotainment system come standard, but you have the option to upgrade to a 12.3-inch instrument display and 10.25-inch infotainment screen. There are five engine choices for the 3 Series Sedan: gasoline-fueled 2.0L turbocharged four-cylinder 181-hp 320i and 255-hp 330i; four-cylinder turbodiesel 318d that produces 148 hp or 320d with 188 hp; or the sole inline six available in 330d, which produces 262 hp. Transmission is solely an eight-speed automatic, but you can choose between rear-wheel drive or all-wheel drive, depending on the variant. A 330e plug-in hybrid will also be available in the U.S. by 2020.

If you want your 3 Series to be sporty, it will also be available in the future with M340i and M340i xDrive. Both will come with a 3.0-liter turbocharged inline-six power plant that churns out 382 hp 500 Newton-meters of torque.

The BMW 3 Series Sedan will also come with several driver-assistance systems to boot. One of the many highlights is its transmission, which in combination with its navigation system, can shift at smarter paces depending on your destination and location. It will also have an Extended Traffic Jam Assistant that takes over the car in a stop-and-go situation and in speeds of up to 60 km/h – something we could really use here in the Philippines.

No news yet of the 3 Series Sedan hitting other countries, but vehicles sales will start soon in Europe and in March 2019 in the U.S. It could take a year or two before it reaches out country, but we’re hoping it would be sooner.