In the world of icons, BMW has been responsible for some of the most beloved cars, transcending generations while still providing the ownership and driving experience that the brand is known for. SMC Asia Car Distributors Corp (SMC ACDC), official distributor of BMW vehicles and parts in the Philippines, has just reintroduced the newest iteration of two BMW icons – the 2019 3 Series and the 2019 Z4.

This seems to be the start of a new model portfolio form BMW in the Philippines, mixing up a good number of recognizable nameplates, together with sprinklings of more exciting performance vehicles. These two new icons come just a few months after the introduction of the 2019 BMW X5, a powerful and thoroughly luxurious full-size SUV. Let’s talk about the 2019 BMW 3 Series first. For over 40 years, the BMW 3 Series has been at the forefront of luxury sport compact cars, combining fun driving dynamics, instantly recognizable looks, and a cabin that’s a pleasure to be in. The new G20, seventh generation BMW 3 Series bring to the table a number of updates to help make it a popular choice for discerning buyers. With slightly tweaked design, much bolder feature lines that strengthen the car’s look, and the classic Hofmeister kink at the rear windows, no one’s going to mistake it for anything else but a 3 Series. There’s some added vents and new wheel designs, as well, and the new LED lighting signature is more striking. 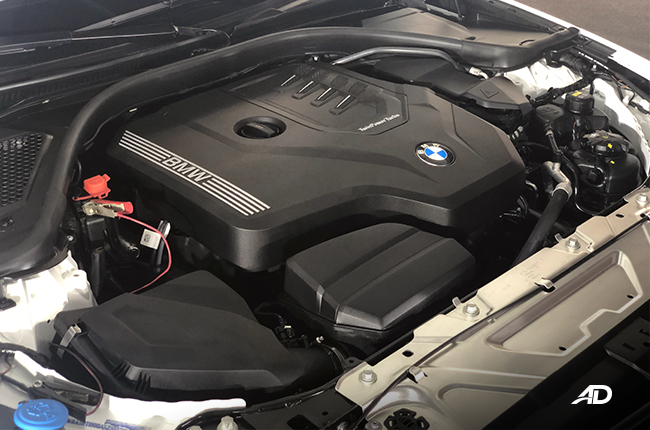 So far, we get one trim level of the 2019 3 Series, the 330i M Sport, featuring a 2.0L four cylinder turbocharged gasoline engine that makes 258 hp and 400 Nm of torque. Power is sent to the rear wheels by an eight- speed automatic transmission. On the inside, fit and finish is still up there with the best, and the lack of gloss black accents is extremely welcome. What you get instead is a tasteful set of aluminum and textured plastic trim pieces that help keep the cabin clean and stately. At the center of the dashboard is the latest version of BMW’s iDrive infotainment system, utilizing an 8.8 inch display paired with a digital driving instrument cluster. Voice commands are enabled by saying, “Hey, BMW”, and driving assistance in the form of automated parking and a nifty feature called Reversing Assistant are standard. What’s cool about Reversing Assistant is that it remembers the last 50 meters you drove to get to you slot, so the BMW can back out automatically with the same steering inputs you made to get into the slot in the first place.

Being an M Sport model, the 330i has a few tricks up its sleeve, and they come in the form of M Sport adaptive dampers that adjust according to the desired settings for optimum control and balance. M Sport brakes with blue calipers showing off the M logo are also standard, and the variable steering feel has been improved in conjunction with the sportier suspension. Now about BMW’s newest roadster interpretation, the 2019 Z4. Revealed at Pebble Beach last August 2018, the G29 is the sixth generation Z4 and shares the same platform as the 2019 Toyota Supra. The 2019 BMW Z4 continues the dynamic shape and look of its predecessor, but ups the ante with cleaner lines and flat surfaces, creating a wider, more aggressive stance. LED headlights are standard, and the air vents and sizable rear diffuser help round off a handsome looking convertible. BMW has also decided to adopt a retractable fabric roof design, ditching any hardtop options. We get two variants of the Z4 here in the Philippines, Z4 sDrive20i and the Z4 M40i. On the inside, sport leather seats and a driver focused interior greet passengers. Minimalist trim pieces and premium materials are favored, allowing the driver to just focus on the driving experience. The BMW Z4 also features the latest version of BMW’s infotainment system, and a massive 12.3-inch screen with a digital driving display. A head up display (HUD) is included in the M40i variant. The M40i additionally features adaptive dampers, M sport brakes, an electronically controlled limited slip differential.